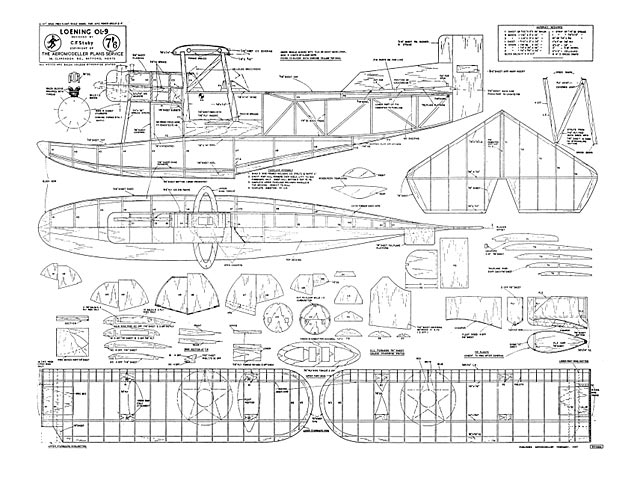 Quote: "THIS PARTICULAR model is unusual for three reasons. Firstly, it comes from an American modeller resident in Bangkok, Thailand. Secondly, it is a model flying boat that can be flown over grass or water. And thirdly, it is of a subject that represents a romantic era in the history of US Naval Aviation. To be technically accurate, the OL-9 should be called an amphibian, and it also could be known as the Keystone OL-9, for the Loening Corporation was merged with Keystone in 1928, and the aircraft was in full production under that company's name during '32 as a 'high speed' two-seater, with facilities for carrier deck landing and stressed to withstand catapult launches. Our model should actually carry dummy wheels projecting from the hull sides, if it is to be made for scale model contests, and reference to Jane's All the World's Aircraft for 1929 and 1932 will provide illustration of further detail for the avid scale fan.

The name of Grover Loening is linked with that of Glenn Curtiss and the Wright Brothers, as one of America's early pioneers of the air. With LR Grumman as Chief Engineer, the Loening company produced a number of amphibians on the single float principle, and these appeared in Army, Navy, Ambulance and Commercial guises. The OL-8 and OL-9 were much alike in general form, and for aeromodelling the long hull, generous areas and dihedral make it a fine scale selection.

CF Stuby who made this 1 inch to 1 foot prototype is so enthused by its over-water performance that he contemplates a version with full radio control. Flying speed with a Mills 1.3 cc diesel up front is slow, and the shallow climb makes a full-tank power run feasible when there's not too much wind to cause drift. It will take off from smooth water on much less than full revs, and thanks to the long nose on the hull, it will never do anything other than alight upright, either with power on or off!

On two occasions, a bad hand launch caused the OL-9 to settle down on to the water and on both times, it recovered perfectly into a beautiful R.O.W. - and there are not many flying boats or seaplanes that will do that! Another time, the original 18 ounces weight was almost doubled by water taken into the surfaces through a hasty dope job after re-covering the wings, yet the only effect on the flight pattern was to create 'roller coaster' action due to the water sloshing back and forth, lateral stability remaining perfect.

The designer adds the following advice on trimming and if one applies just a little imagination in interpreting these hints, then one can readily understand why the flying boat is so attractive a modelling subject, particularly when it is a scale model such as the Loening..." 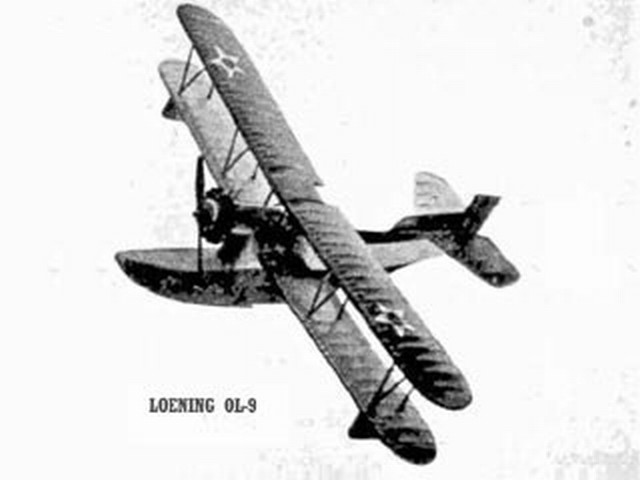 Mary and Steve, I thought that I would send you a couple pics of the 1/16 scale Loening OL-8A that I just finished [more pics 004-006]. It has a W.S. of about 40 inches and is completely scratchbuilt, in Spencer, Iowa, USA.
RayLathrop - 31/01/2017
Gorgeous.
Just gorgeous.
James Hickman - 27/08/2020
I was giving just a cursory thinking "What is a museum exhibit doing here?" when I looked more closely and noticed this was a model workshop! I've been fooled but being fooled like this is a pleasure!
Miguel - 27/08/2020
Add a comment