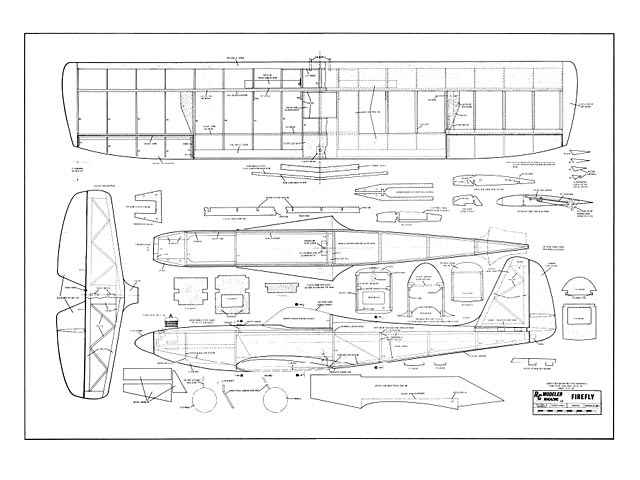 Quote: "A candidate for 1968's winners circles, the Firefly performs every known maneouvre. Designed for up to .49 engines and spanning a scant 52 inches, it is fully aerobatic on a good .35. With its twelve percent airfoil and a Merco .49 it climbs out like a scalded eagle. Firefly by George Harris.

The Firefly started out to be a protest against the increasing size of multi models and the rising cost of balsa. It was designed to be fully acrobatic with a .35 size mill and to hold full house proportional without squeezing. The first one built has been flown with a McCoy .35 and a Merco of the same caliber and will do the AMA pattern with either. After the first flight the aileron link on the left side was adjusted one turn and no changes have been made since. Twelve flights were made the first day out without breaking a prop, the only fault seeming to be insufficient rudder for consistent snap rolls.

A second model was built with a larger rudder, wing fillets and a few minor im-provements in structure, including widening the fuselage to take three of the larger type servos side by side. The Ks gear was transferred from number one to number two, and, just for fun, a Merco .49 series 2 was dropped in behind the spinner to see if the beast would handle the power. When the loud lever was pushed forward the Fire-fly rolled almost six feet then climbed out like a scalded eagle! No trim changes seemed necessary so the first flight included multiple snap rolls in either direction from either side up. The plane will fly hands on in a straight line or will hold a gentle turn without sliding off. Loops have been started with one wing intentionally low and, using elevator only, the plane will finish the loop with the same wing low condition.

In spite of the stability the plane will do any maneuver possible with a model and is ideal for free style aerobatics.

A few of the design features should probably be explained. The ailerons look a bit strange from the tip end but this built in washout prevents tip stalling and makes the model very stable at low speeds, so tight turns can be made in the landing approach without dropping a wing. I used this method of getting washout on gliders many years ago and it is very effective. All the wing ribs are the same basic size and no special jigging is needed since all the wash-out is in the ailerons themselves.

Because the model was intended to move around rapidly a 12% airfoil was used, but this seems to provide all the lift necessary, even in a slow glide. The control surfaces may look large to some people, but with proportional you don't have to use full control all the time yet it is there when you need it for the violent maneuvers. I used about 30 degrees up and 20 down on the elevators. 30 degrees each way on rudder, with 25 up and 15 down on ailerons. For reeds these should be reduced by almost half rather than cut down on the surface areas.

I like lots of access without turning the model over and removing the wing, so the top hatch is removable in one lump from the spinner to the trailing edge of the wing and is held by a single Camlock. The wing fillets prevent buffeting in high speed maneuvers by eliminating vortex shedding at the junction of the wing and fuselage. If you don't believe in aerodynamics take my word for it, it works. I have watched various models through a small telescope and the tail buffeting can be seen by the light rippling on the surfaces, especially in tight turns... " 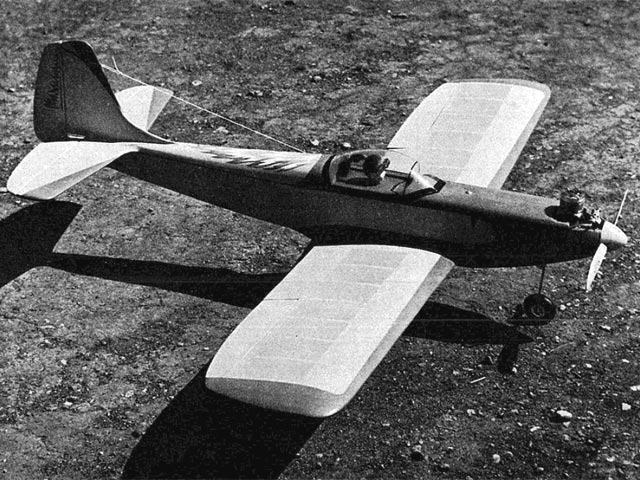