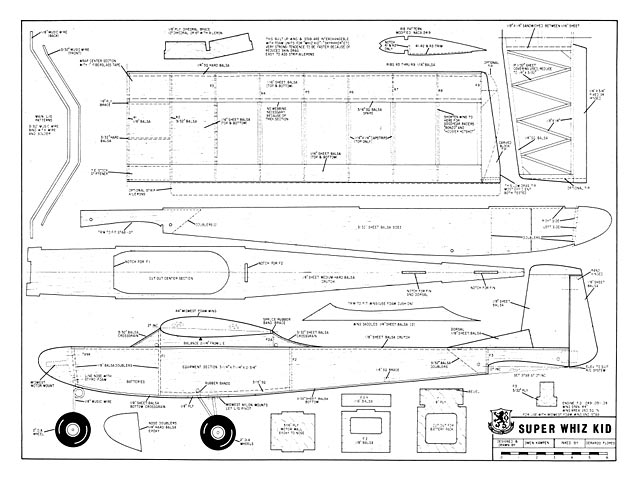 Quote: "Big brother to the famous Whiz Kid (oz8493) this version is for .049 through .15; rudder-only up to full-house with ailerons. A host of options include a foam or built-up wing. Super Whiz Kid, by Owen Kampen.

When the original Whiz Kid made its appearance in the December 1966 issue of RCM, it started something. In fact, it started many things, but mostly it triggered an unprecedented response by hundreds of modelers who wanted to get into the R/C act simply, economically and with more than the usual assurance of success. They and most of the thousands that built the Midwest kit were not disappointed, and many took the time to express their enthusiasm and report their growing number of successful flights. At our field in Lodi, Wisconsin alone, some dozen models have logged over 2000 flights - we stopped counting!

All of this adds up to a large group of fliers who have gained control, confidence and enthusiasm and as a result have stayed with the sport to grow and move on to larger and more complex planes and gear. This is a fact sometimes overlooked by those 'sophisticated' modelers and manufac-turers who tend to minimize what they feel is a Mickey Mouse approach. I am still not convinced that the majority of newcomers to the hobby are ready and willing to part with $300 and $400 just to see if R/C is their bag. For that kind of money there are LOTS of alternatives.

Meantime, back at the ranch, most of the Whiz Kid builders didn't get into the discussion; they were too busy flying. I say 'most' because here and there was heard a discouraging word, and the words began to follow a pattern.

In general, the critics evidenced a total disregard for the design limita-tions of this purposely light, slow .049 single channel trainer. Reasonable weight limits were wildly exceeded with a corresponding lack of perform-ance, while others tried the power-house approach, .09 and even .15 size engines were bolted on, upsetting all weight and balance logic. This group wasn't terribly thrilled either. (One notable exception was a .35 powered 5 foot version which responded with all the gentle traits of its little brother.)

A third area of complaint was heard from those who tried to cram a gang of servos into a space designed to hold one small single channel actua-tor. The 'reasoning' behind this is not clear as a multitude of roomy boxes are available for use with big iron. Perhaps they just liked the quick easy way the W.K. went together, and there IS something to be said for that. Crutch construction for perfect alignment, thicker wood and fewer parts adding up to fast easy building in a minimum of time and space. This, plus the Midwest foam wing and stab for warp free performance and epoxy-quick repairs. The foam wing and stab were, at the time, something of a novelty but, in the months to follow, became an integral part of a growing number of designs by a variety of modelers and manufacturers of ready-to-fly packages. So the original design concept proved out, but per-haps it could be improved so that past objections could be overcome.

A larger, roomier version able to hold a variety of R/C gear and capable of handling larger engines was obvious, but it took the constant urging (nagging) of friend and fellow modeler Frank Baker before the Super Whiz Kid became a reality. Frank's contagious enthusiasm is an awesome thing and I finally ran out of excuses and got cracking.

Within a week the new one was flying and it has been flying ever since. For over a year and a half it has served as a basic test bed for a variety of engines and radio systems. Power has ranged from Cox TD .049's through .051 and .09's, rudder only, Galloping Ghost and miniature multi proportional. Proof of the Super's capacity to survive all this is evidenced by the photos of the original model on these pages as all were taken at the end of the 1968 flying season after two sum-mers of hard flying. There have been the usual (for me) number of chaotic moments ending in what normally would be disaster but the rugged one keeps coming back for more. A number have been built by other modelers and all have lived up to the original in terms of consistent per-formance and survivability.

Because of the test bed function of this craft - a few observations will be passed along to give you a better idea of its versatility. All original testing and flying was done using the Cox TD .051 engine and the Adams Twin actuator. Performance was great with solid response and 100% reliability. Loops and rolls are a cinch with a nice flat glide on power off landings. Later, a Hallco '103' was installed and flown with excellent results using both the .051 and .09 Cox engines. Here the addition of elevator and motor control gave added dimensions of performance. The Hallco rig is a dandy, beautifully made, and a boon to those who prefer a plug-in, all in one system..."

Update 21/10/2018: Replaced this article with a complete version, thanks to PeterGregory, hlsat. 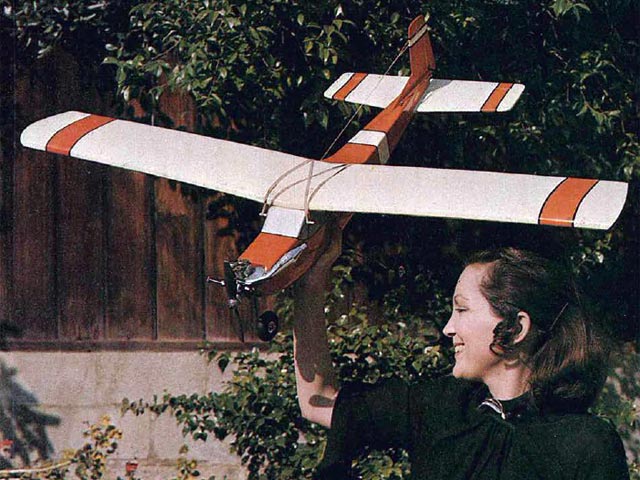