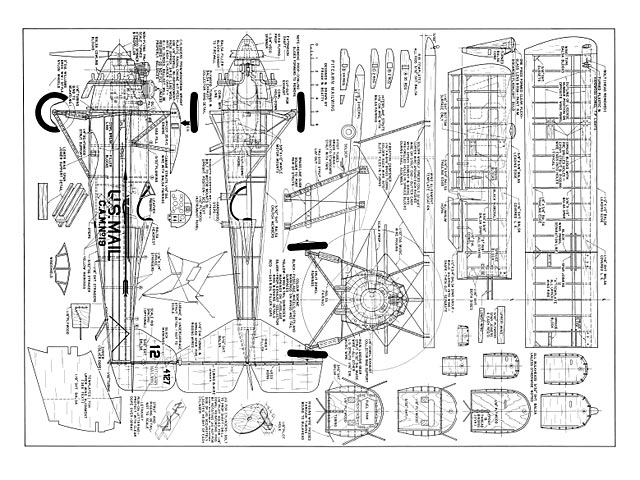 Quote: "The Pitcairn Mailwing was specifically designed in 1927 to be sold to contract mail carriers for night airmail runs. An immediate success, this craft which could carry 600 lbs of mail at speeds up to 136 mph was being produced at the rate of one per week by the end of 1928. Many an airline that is world-famous today was equipped with Mailwings during this era.

Many Mailwings finished out their days as crop dusters and a handful of Mailwings are still flying today. Well preserved examples can be seen at the Tallmantz and Smithsonian Air Museums. For many aerophiles watching the TV late movies, the real star of Blaze of Noon is the Pitcairn Mailwing.

James Triggs' fine three-views which appeared in the January 1959 American Modeler and the Fall 1960 Air Progress were used in preparing the Mailwing working drawings. Mr Triggs' drawings did not include coloring data, but replies to letters sent to Eastern Air Lanes, Tallmantz Aviation and the Smithsonian Institution all verify that the plane was painted as described in this article. It was noted that if Mr. Triggs' three-views were to be enlarged four times, the Monogram Wright Cyclone Plastic Engine Kit would be exactly the right size for this model. The model has therefore been built to a rather unusual scale of 1-3/16in = 1ft and has a 39in wingspan and a 26in length. The ship is powered by a McCoy 35 R/C engine with a Roberts bellcrank operated throttle and all-up weight is some 51 ounces.

It was originally intended that the Mailwing's construction would follow closely an old favorite sport scale model built many years ago - Chuck Hollinger's Fleet Trainer (oz613) from Air Trails, May 1951. Such a model would have gone together much faster and would have had some stunt capability. But as the drawings and construction proceeded, more details with their supporting structures and vast amounts of filler and dope were added until the model far exceeded its original proposed weight.

The Mailwing's configuration is such that unless some care is exercised in keeping the model's tail as light as possible, ballast will be required in the nose. Having gone overboard on details and paint, the prototype required some 10 ounces of ballast in its nose; six to eight of these ounces being packed in the hollow plastic engine cylinders. Many of my scale models have had wing loadings of 20-25 ounces per hundred square inches of wing area, so this model which sounds brick-heavy at 51 ounces has a reasonable (for me) wing loading of 14.3 ounces per hundred square inches of wing area. It has flown and handled well, even in gusty-wind contest conditions. A model of 40 ounces or less could be a true weekend sport flyer, so build to suit your purposes, but DO NOT FLY your model unless balanced per drawings.

Wings: Cut out all ribs, spars, spar joiners and leading and trailing edges and ce-ment these frames together. Shape the leading edges and then add all 1/16 sheet balsa panels and the tip fairing blocks. Epoxy all pre-shaped spruce strut and rigging blocks in position and then sand both wings to final shape. Drill the lower wing rear spar for the 1/4 in dowel aileron supports before cutting ailerons separate. This assures that the aileron will mate perfectly with the wing on final assembly. Mark all strut and rigging wire locations on the spruce blocks and drill..." 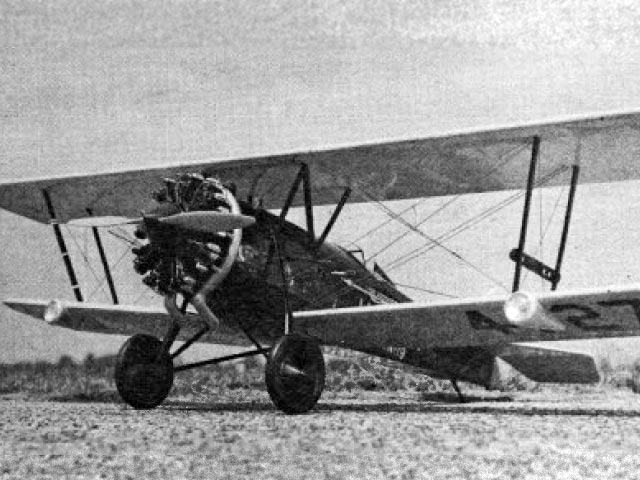