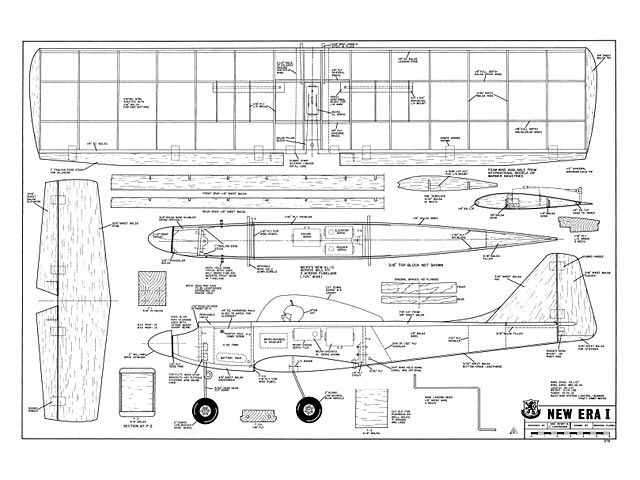 Quote: "For phenomenal performance you won't believe until you fly it, here's your introduction to the 'New Era'

It is small, easy and economical to build, flies for 10 minutes on a 4 ounce tank of fuel, is virtually indestructible, requires only a modest investment in the engine and yet is designed just like its larger brothers. It has the full capability and potential to do the complete FAI pattern, including knife edge flight, eight point rolls, Top Hat and so on. It is also an excellent trainer for the New Quarter Midget class, since it has a big wing area and a higher drag wing section. The only requirement that differs from the larger competition aircraft is that it needs one of the new, small radio systems. This design has been thoroughly field tested, and has demonstrated its capability of competing on an equal footing with the larger competition ships.

The New Era was designed almost two years ago in anticipation of the miniaturized digital proportional systems. At that time, however, these systems had not yet been introduced by our industry and thus this particular design was shelved for several months. The introduction of the Bonner 4RS system heralded the advent of the light-weight proportional era. We then went back to work on the first prototype of this design. A joint effort between the two authors, the New Era was shuttled back and forth between California and Texas. Modifications were made to the origi-nal design concept in order that the aircraft would be capable of perform-ing the entire stunt pattern. More recently, certain changes were incor-porated in this design so that the craft would do the entire FM competition pattern. As design changes became necessary, they were tried and tested, then incorporated into the final design as presented here.

The New Era is an ideal small field aircraft for the sport flier as well. A great deal of the flying with the several prototypes has been done from a large vacant lot in Texas, bordered by power lines, a railroad track and a busy street on one side, a 140 unit apartment on another, a freeway on the third side and at least for the time being, another vacant lot on the fourth. This flying site has since fallen to the carpenter's hammer and addi-tional flight testing was done from somewhat more conventional fields. The California prototypes were flown from the latter type of airstrip, as well as from the rough terrain of The Hill.

This aircraft can make sport flying a lot of fun and is a good change of pace for the experienced multi pilot. We really don't feel that this is in any way a good ship for the beginner with no proportional experience, but it is an was outfitted with EK Products new Logictrol III. This rig fits into the limited interior of the aircraft with very little room to spare. You do have to mount the servos and the receiver in the conventional manner and cannot use the new KEK servo mounting tray. The completed aircraft, ready to fly, weighs in at 3-1/4 pounds.

For the sport flyer, a .15 size engine for this little bird. For the competition flyer who needs the maximum in performance, a .19 engine is definitely recommended. In testing its sport flying capabilities and with an Enya .15 installed in one of the prototypes, it proved its ability to take off easily from a freshly bladed vacant lot. It was also flown from a grass field and although the run was just a bit longer, it still evidenced no hesitation in getting off the ground in a hurry. A good method for insuring that this small size ship will take off from a less than smooth field, is to set it just a bit positive on the landing gear. This places the wing at a positive angle of attack and thus creates lift prior to pulling the nose off of the ground. This same procedure, by the way, holds true for a larger size ship as well.

The construction of the New Era is very simple and is as conventional as that used in the larger models. The wing on the first prototype is foam with balsa covering. The plans show a built-up wing which was used on other prototypes, so you may take your choice.

The fuselage utilizes 1/32 plywood doublers, which gives a body of tremendous strength. The tail surfaces are constructed of sheet balsa. Since this is a simple ship to build, we will not go deeply into the construction details, but rather, just touch upon the high spots. If you elect to use a foam wing, then cover it with either balsa, or cardboard. Install the landing gear blocks with epoxy glue, glue on the tip blocks with epoxy, join the wings at the center section of the wing with a 4 in wide band of fiberglass cloth applied to the wing with epoxy resin. If you prefer, you can substitute a 4 in wide band of Celastic for the fiber-glass. We realize that the thinner soaked Celastic will dissolve the foam if it should contact it, but since you are working outside of the covering, don't worry about it.

If you choose to build up the wing from balsa, you can follow the plans and build a very strong wing with the modified egg crate construction and..." 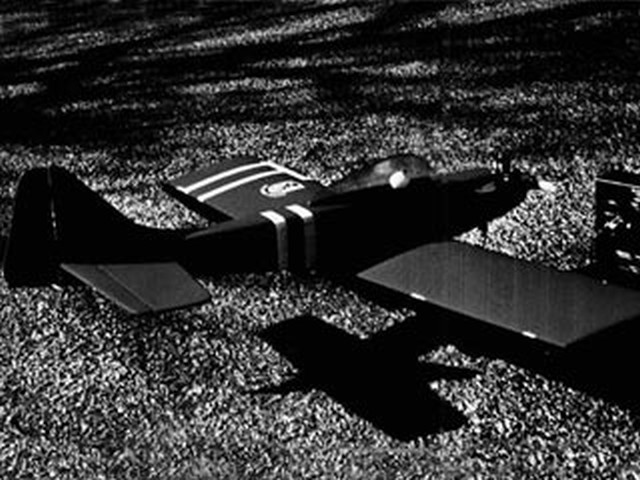