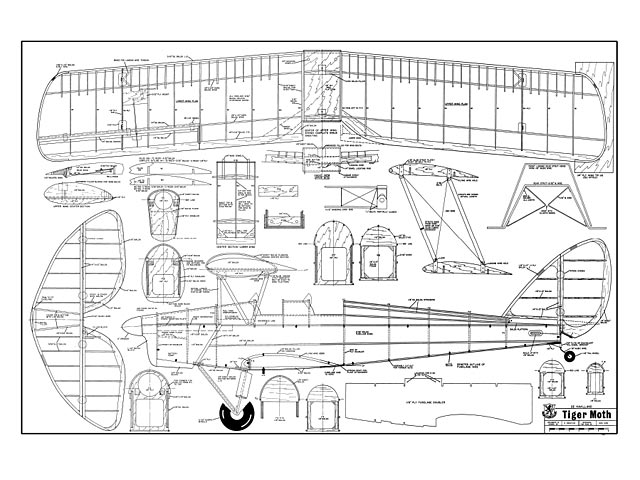 Quote: "During the years of World War II, the DeHavilland Aircraft Company, and other companies under contract to them, built more than 8,000 Tiger Moth training planes. The back-bone of the RCAF Commonwealth Air Training Plan designed to train air crews, used this aircraft as its elementary pilot trainer. To accommodate the harsh Canadian winters, the open cockpits of the aircraft were enclosed in a large greenhouse, the two center panels, of which slid on rails to a position behind the rear cockpit.

This aircraft is still flying around the world and many present airline pilots return to their original love of the open cockpit and singing wires by relaxing in these machines.

The model presented here is not entirely scale as compromises have been made to ensure flyability for a relative novice. A Clark Y airfoil has been employed to ensure a slow landing speed. The model, as a result of this airfoil, and large wing area, can be flown safely inside a football field. Its high sink rate on landing coupled with its response to throttle on take-off and high rate of climb make touch and go's a cinch in a small area.

The model relies on the interplane struts, landing and flying wires for the strength required for flight. Do not omit these details without strengthening the wing spars. The procedure used to hook-up the struts and wires is the result of 3 major design changes. The aircraft can be assembled on the field in a minimum time and without the use of turnbuckles.

The engine, although space is available to invert it, has been left in the upright position, a compromise to ensure flyability without fuss. It is difficult to invert a biplane for engine starting without damaging the upper wing.

The major problem in the construction of a biplane is the installation of the upper wing and cabane struts. This design, with no outward slope to the struts, and with a center section fuel tank, permits the provision of a platform in this area on which the upper wing is installed.

This is not a beginners construction article. Only the specific points associated with the construction will be discussed. It is assumed that anyone selecting this model will be well aware of the normal construction techniques through previous experience.

Fuselage. The bulkhead 'key' assembly technique is employed to ensure easy assembly. The 1/8 ply doubler extends above 3/32 side panels in the area where the cabane struts are attached. Drill the holes for the struts and insert 2-56 anchor nuts on the inside for cabane struts. Ensure these holes are accurately located. The 1/4 plywood undercarriage mounts sit on the underside of the fuselage sides and doublers. Install 4-40 blind nuts to accommodate the gear. A 1/8 plywood insert is added to the bottom of the fuselage behind the rear wing to accommodate floats at a later date. The lower wing is held in position by 1/4 dowels at the front and Dzus fasteners at the rear. Build the lower wing prior to completing the assembly of the fuselage. It is easier to install the fasteners while looking down from the top inside the fuselage than attempting to do it after completing the model. Ensure that an oil drain is installed in the sump under the engine. Make sure this area is sealed so that oil will not leak into the fuselage..."

Article pages, text and pics, thanks to Mary. 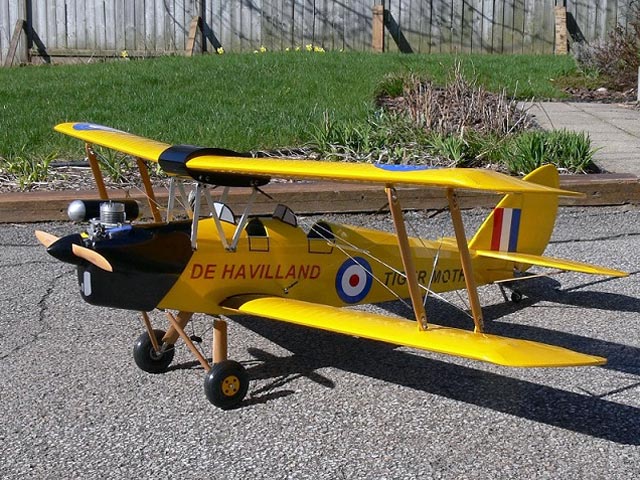