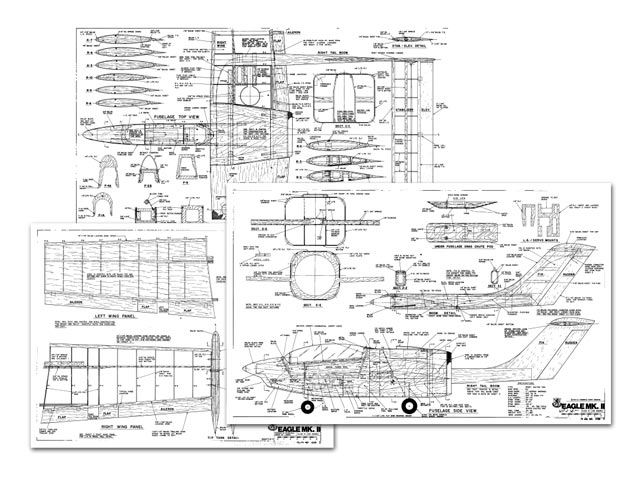 Quote:- "Looks, performance, and all wood construction make this model a natural for your first ducted fan. Eagle Mk II by Giancarlo Genta.

The whole thing started in December '87, when my son Alessandro (then 11) was learning to fly with the usual trainers. He asked me to build a jet plane which would be easy enough for him to fly and still retain the 'jet fighter' looks and performance one looks for in a model of this kind.

The idea was so challenging that I decided it was worth giving it a try. In our city them are a number of modelers who fly Pulsejet aircraft. They are impressive and well suited for air shows but their noise, the need of complex (perhaps simply unusual for the average modeler) starting procedures, and the impossibility of regulating the thrust in the usual may are not exactly what a Sunday flier likes as a standard flying machine.

Ducted fan propulsion seemed to be much more promising. I had never seen a ducted fan plane flying, although I knew that in our area some modelers had one in the building stage. The president of our club had a number of flights with a Byron F-16 and was building a Corsair II with the same Byrojet unit. I started looking in magazines to see whether it was possible to find a model which would fit the idea I had of an entry level ducted fan.

The basic requirements were:

1. The ship had to be easy to fly, with handling characteristics more like a trainer than of a pattern plane.
2. Good take off characteristics, without the need of a long, surfaced runway.
3. Ease of operation, particularly the starting of the engine. The model had to have more or less the same ease of handling a Sunday Flier expects from his planes.
4. Overall look of a jet fighter. If not a scale model of an actual jet, it had to at least look like a real aircraft. No cheater hole allowed!
5. Good speed performance, possibly in the range of 130 mph (200 km/h).
6. Very good maintainability, with easy access to the engine and all other devices needing maintenance.
7. Ease of construction with con-ventional materials and scratch-building techniques, with low cost for the whole project as a secondary requirement.

I realized that no ducted fan kit or drawing I was aware of would fulfill the above mentioned requirements. Even though ducted fans are suitable for scale models (as many jet scale aircraft have been built with success), only by designing a flying machine around the propulsion unit can you optimize its performance and fulfill completely the above mentioned requirements.

I bought a Byrojet unit, a secondhand Rossi 81, which had just been run in, with the pipe suited for the application and a retract set. And after measuring all the relevant dimensions, I started drawing. 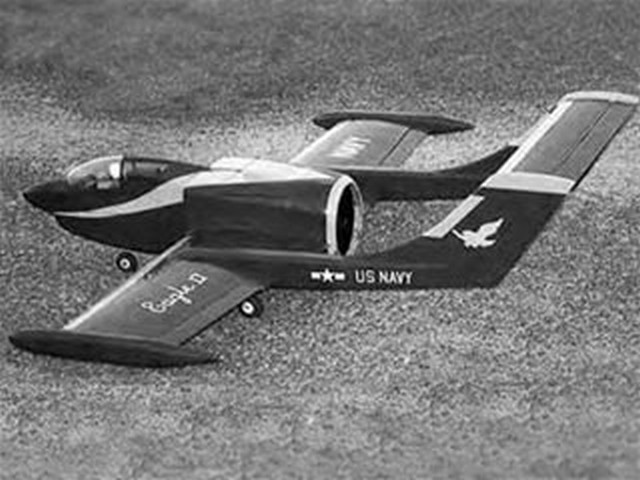