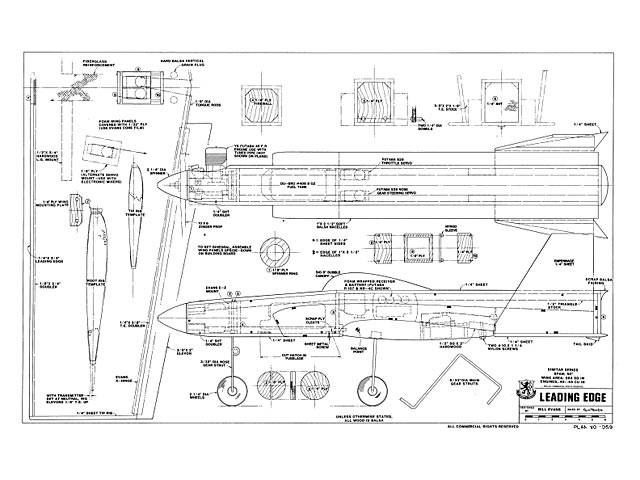 Quote: "The latest design of Bill Evan's Simitar series for a hot .40-.45 engines.

Forward to the Twenty-First Century. Yes, we are the fortunate ones. For countless years man has looked to the sky with visions of mastering the art of flight; and, we, in our time, merely the blink of an eye in terms of man's time on earth, have witnessed astounding progress. Including flight!

From that moment at Kitty Hawk when it became a reality that man could fly, aircraft development raged at a staggering pace. Throughout the years, improved performance to fly faster, higher, and farther has been the key thrust of those involved with the development of flight.

Many times it has been said to me - Why do you fly Simitar Series aircraft? Must be because you designed them. My answer is, performance!

Yes, performance. First, no stall; reduce power and gradually feed in up on the elevator and the nose will automatically drop a bit, this reduces the angle of attack, therefore no stall. Next, the wide speed range; no matter how much power you put to a ship of the Simitar Series, it just goes faster (no Dutch roll). It also slows down to a crawl (effect of no stall) and sets down like a hang glider. Finally, a Simitar is directional in it's flight in that it will remain in any attitude which it is set in, blip a little left aileron and it will hold in a left turn, barring severe wind it will do 360's, one after the other.

Though this series of aircraft operate on the concept of a flying wing, it doesn't really look like a flying wing, neither does it appear to be conventional in nature. So, what is it? An aircraft of the Simitar Series! So, if you are futuristic minded and have had it with the thirty year old type of aircraft and construction; you are eligible to become a Simitar pilot with a cause!

Project Leading Edge. The idea of another project was not easily accepted until Richard Verano of Futaba unraveled some of the performance data about the YS-45, so strong running it's unbelievable, and it turns an 11 x 7 like a 60. The new Futaba PCM 8 ch would be a great match with the YS-45, but what to put them in? Austin Bremmer of Florida was in the process of finishing his Desperado 40 and had been touting me about a multi-finned variant, so I was hooked!

First came the wing. I knew a 50 in ply sheeted structure like the Similar 540 (oz10196) would fill the bill. The fuselage should be something like the 540, but much larger; air ducts (for aesthetics) with length to allow for the twin verticals to extend beyond the trailing edge of the wing. A small lip at the top rear of the fuse, for appearance. As the fuse took shape, mocking-up and trying various size fins for best function and fit began. At this time, the idea of tilted fins and small sub fins were also included. Just as the air frame was about to be covered, the YS-45 RE with pipe arrived..." 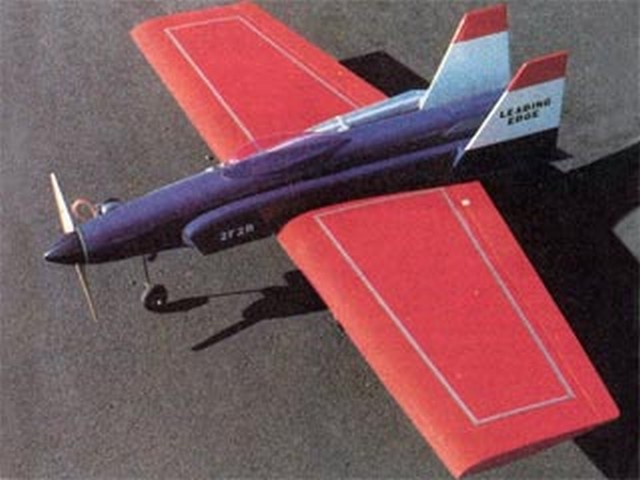