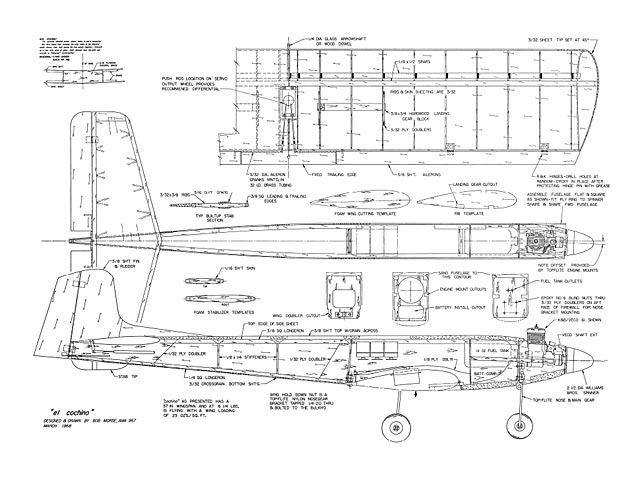 EL COCHINO has been around for quite some time now, the first ship being built in 1963. We enjoyed it then and we're still having a lot of fun with its successors. Despite our 'Charley Fumblefingers' approach to contest flying, old El Cochino has kept us pretty well up in standings in the West Coast contests. Our biggest contest showing was at a recent West Coast R/C Champ's meet when we were in third place after the first day's competition. We took care of this by 'fine tuning' our engine before the next day's flying and promptly finished in fifth place.

Perhaps we had better get into the design philosophy of the ship and try to impress you all with painstaking effort we've put into shaking our slipstick and rattling our Reynolds' numbers in coming up with this arrangement.

We would like to, but we can't. The truth of the matter is that we've swiped every idea we've seen in the past that appeared to have any merit! You old-timers can see some Smog Hog (oz671), some Astro Hog (oz4756) and even a trace or two of Bob Palmers' old Gee String (oz9958) in El Cochino. Those of you who understand Spanish will see the reason for our choice of a name (for those of you who don't, El Cochino translated is: the biggest hog of all).

We've streamlined the ship some, re-shaped it some to fit the changing radio equipment, inched a 'moment' around here and there, but, basically, it is still a fundamental arrangement.

There have been about 20 or so Cochinos built in our area, and in all probability, no two of them ever initially flew the same. Of the eight ships I've had in the past five years, a few of them have grooved right off the board and the rest have re-quired some degree of adjusting to get the good flights in. We've seen some ships that are flying the Lazy-J pattern beautifully but go all haywire when trying to do some AMA pattern work. The two most promis-ing villains in this case are the CG and the angle of decalage (that's a long phrase that means the angle between the mean chord lines of the stabilizer and wing). So, if you would like some 'on the wire' maneuvers, don't be afraid to fiddle a little with these...." 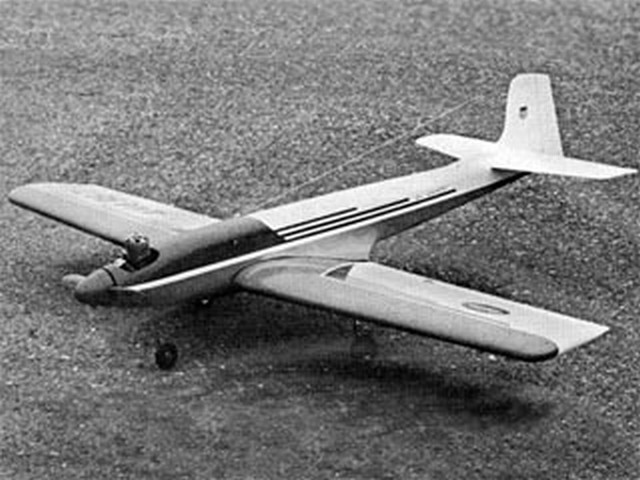