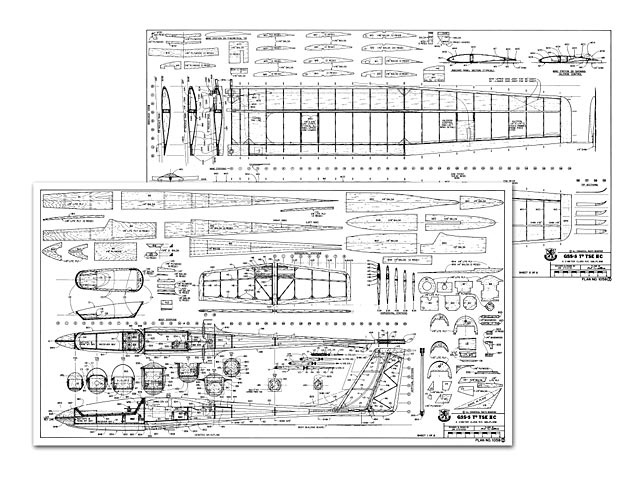 Qyuote: - "Jim's 5th generation of his 2-metre sailplane. It has ailerons and unique split flaps for ultimate control.

When I started building and flying model airplanes again, about seven years ago, it was after about a 25 year hiatus. I started with radio controlled sailplanes and I looked at what had been developed in full scale sailplanes. Tow-line sailplanes have always been my first love in model aircraft, despite a career of some 35 years in the design and development of fighters and trainers. I found that the glass age had struck, and it was difficult to tell one sailplane from another. One series of designs began to emerge in my fancy though, which I thought looked pretty elegant. These were the Glasflugel sailplanes. I had heard of the Libelle from a friend of mine, but the Hornet, Mosquito, Kestrel, and 604 were new to me. I especially liked the looks of the Hornet and Mosquito.

After progressing through a Wanderer (oz4100) and Paragon (oz5849), I started building and flying my own designs. The G1S and G2S are two- and three-meter redesigns of an old tow-line free flight model which I just wanted to see in the air again. The G3S is a Manta planform flying wing, which must be considered still in the development stage. All of which brings us to the three T-tailed models, in which I tried to get the 'feel' in
appearance of the Hornet and Mosquito, and which also suggested the name Tsetse. My wife, who grew up in China, tells me that 'Tse' means 'Lion' in Chinese, so there is now some confusion as to whether the T'Tses are Tsetse Flies or T-Tailed Lions. Whatever! T'Tses come in three sizes: G4S, T'Tse Standard, 100" span; G6S, T'Tse III, 3-meter, 120"; and G5S, T'Tse II, 2-meter; which is the subject of this effort.

The G5S-5 T'Tse IIC is the fifth version of the model to be flown. I have found 2-meter models to be a little skittish quite often, and it has taken five tries to get this particular configuration 'broken' (as it were). The results have been worth the effort, however, for this model is a real pleasure to fly. I am not an acrobatic pilot but I have been learning things like rolls and stall turns with the T'Tse. The design considerations of the model are as follows:

(1) 78-1/2 in flat span for 2-meter class.
(2) Look like an airplane.
(3) Clean lines for low drag.
(4) One piece wing - lighter than plug-ins and easier to rig controls.
(5) Split flaps. More effective than plain flaps for shifting the drag polar and increasing maximum lift. Substitute for spoilers at 90 degrees deflection.
(6) Target weight of less than 38 oz. for a target wing loading of less than 9-1/2 oz./sq. ft.
(7) Tailored airfoils on outer panel to reduce drag and control stall progression. The principal airfoil parameters are shown in the chart.

The larger normalized leading edge radius at the tip produces a nearly constant physical l.e.r. over the entire span. This helps to reduce any tip stall tendency. The airfoil has proven to have a wide speed range. The wing has an actual reluctance to tip stall, and the split flaps/speed brakes are very effective. Low flap deflections provide very good thermaling performance, an absolutely stable launch on the winch or high start, and maximum deflection produces an almost 'walking pace' landing approach. The fuselage lines were developed with three basic things in mind:

The afterbody is basically a straight cone lofted around the horizontal reference line. The forebody is ellipsoidal, being lofted around an axis angled down toward the nose from the horizontal reference line. The transition between the forebody and afterbody, and the junction of the vying and vertical tail with the basic shapes were then faired in smoothly. All of this may sound like a lot of engineering for a model airplane... " 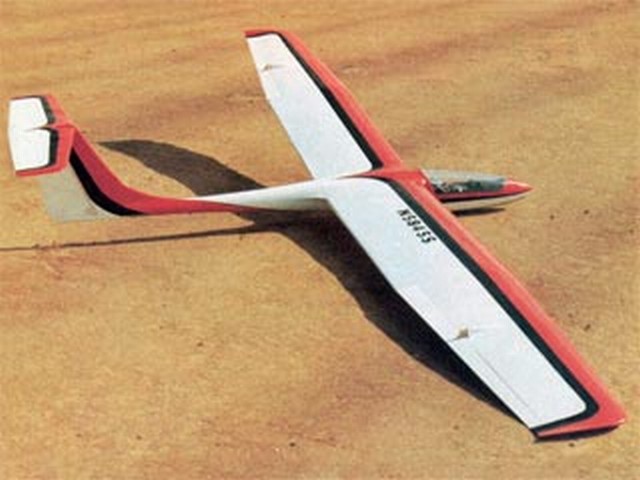