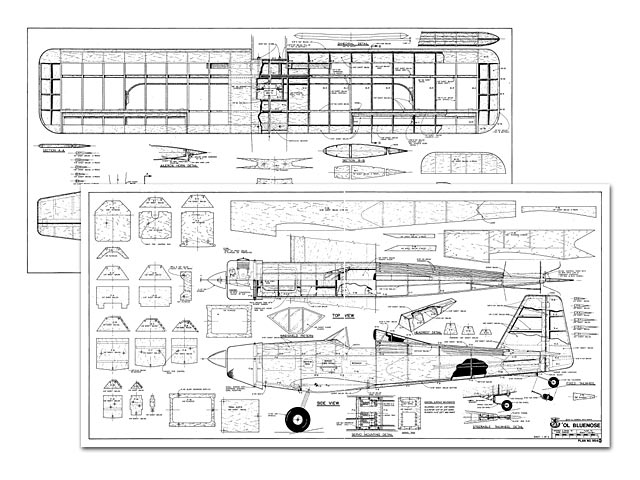 Quote: "Watching the flying activities at my local club field (not flying you'll notice, just watching) and demonstrations at various trade exhibitions, I have often noted that model fliers tend to 'burn up the sky' at full bore for the whole flight, only finally throttling down when entering into the pattern or, more usually, straight into final approach.

There is a lot of fun to be had using the throttle through acrobatic maneuvers, and cruising at reduced power between them. This has been pointed out many times before in the magazines but little seems to change at grass roots club level. The new turnaround acrobatic schedule will no doubt influence the contest fliers' approach and the vintage scene has also brought about a naturally slower flight scene, but just why does the average club flier with a .40 powered 'kipper' type continue to blast around? Is it because there is a lack of confidence in the models flown, through being too highly loaded, and, therefore, the fear of stalling out? Is it because the 'fish shape' design doesn't look or sound right throttle back? Or, is it simply just habit from years of similar flying handed down to newcomers by the old hands, from the lack of real flying training usually given at club fields?

Most tuition stops when the pupil can reasonably and confidently take off, stooge around with perhaps the odd loop, and land again without assistance. From there on he's usually on his own as regards to learning to fly aerobatics and without any knowledgable guidance.

Okay, so I'm not the guy to tell you how to fly aerobatics as others are far better qualified than me, but I can provide an aeroplane design that will at least provide a basis both in performance and looks that removes two of the above questions. Kicking the habit is up to you. The design of the model was based on the following criteria:

(1) Low wing loading for good low speed characteristics.
(2) Large wing area to reduce the R/C and engine weight percentage.
(3) Thick symmetrical wing section with parallel chord planform to keep the airspeed down and give good handling near the stall.
(4) Power requirements suitable for average 'cooking' 2-strokes or possible use of a 4-stroke should I purchase one later.
(5) Attractive semi-scale appearance with simple construction. (6) Two wheel main fixed landing gear because I like tail draggers.
(7) Flaps were considered as an option but I omitted them due to laziness, a point (on reflection) that may have been an error. It depends on your landing strip. The model does tend to float on landing even with just a touch of power. Flaps would help the spot landing, but if you fly from tarmac, or have a large field, it's probably not worth the complication for such a small percentage of the flight envelope. On future models, to this criteria, I would fit them but as I have no practical experience using flaps, I have omitted them from the plan. By all means modify the wing if you wish. The inset ailerons were specifically chosen to enable simple torque rod operated flaps to be included.

'Ol Bluenose is not intended to represent any particular airplane but in general has the lines of a typical EAA/PFA type, though possibly the cockpit is perhaps too far back to give the impression of, say, a Volkswagon powered type. It is perhaps more of the Spinks Acromaster size if you based a scaling factor on the pilot (Williams 2-5/8 scale used on the prototype).

The construction is extremely simple for this size of model, with the fuselage decking being no more than flat sheets and strip on a basic box. Some minor changes have been shown on the plan as compared to the prototype, mainly to balance the tail group appearance better and to slightly desensitize the elevator. Other minor alterations have been to the nose construction to simplify positioning the fuel tank.

The prototype is powered by a Merco .61 which is adequate power although I had much trouble during early testing with a poor crankshaft / crankcase front bearing fit. Any .60/.80 4-stroke would be okay with the sound considerably improving the overall impression in the air. The fuel system is kept separate from the main R/C compartment which is one of my pet fads. You could modify it if you wish by omitting the bottom hatch and cutting a tank hole through the bulkhead and poking the tank in through the R/C compartment. The structure is, however, plenty strong enough with the hatch. I've proved it! An advantage of the hatch is that you can locate the NiCd pack in the tank compartment if you need a little nose ballast..." 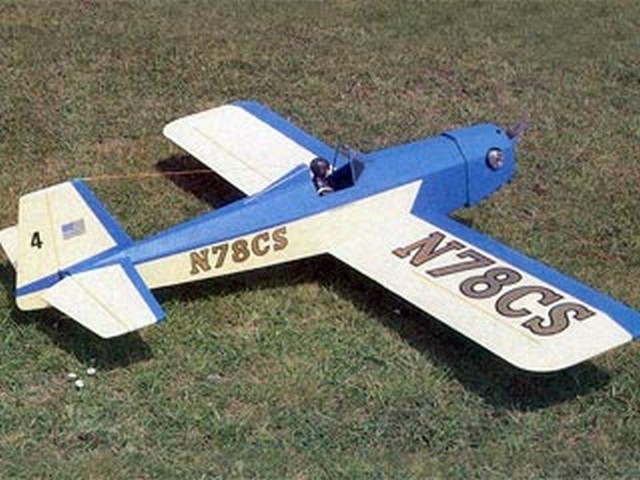