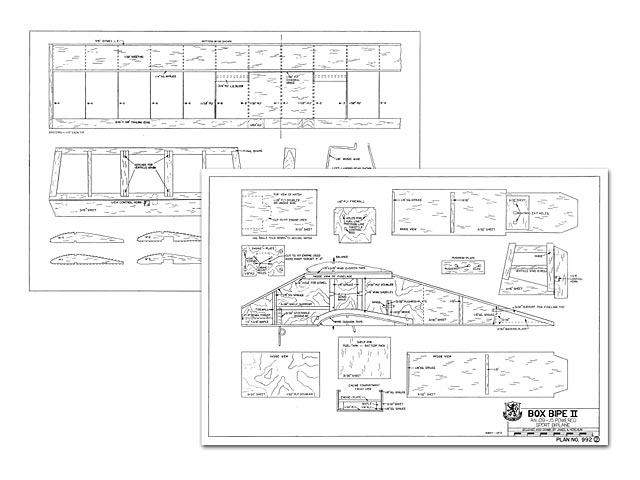 Quote: "This neat little .09 - .15 powered bipe is not only unique, but the performance is outstanding.

The concept of a box-tail was not conceived for the purpose of being unique. It was contrived to be used with other factors to create a more efficient aircraft.

Let me explain what a box-tail is and how it works. The concept of two channel directional control of an aircraft consists of more than just a rudder and elevator yawing and pitching a plane. There are many other factors involved that can be used to one's advantage. Let's begin with the simpler of the two; the horizontal stab.

This is simple and works well. Therefore, all that is left for us to do is to locate the horizontal stabilizer in an area where it can perform its function with the least amount of adverse effect.

This problem can be overcome by using two vertical stabs. By keeping the width of the fuselage the same throughout its length we can locate a vertical stab on each side of the fuselage with enough distance between them to allow for a solid support for the horizontal stab. This produces an extremely strong tail system and solves yet another problem.

By using two vertical stabs we can maintain enough stab area and still keep it low enough on the aircraft to eliminate adverse roll effect from the rudders. Let me explain.

Since the fuselage is the same width through its length, it can be used as an airfoil, thereby further increasing efficiency of the overall aircraft.

If the fuselage is used as an airfoil we must first look at it as a section of wing. Then we must find its balance point and place the conventional wing (or wings) on the aircraft so that both the balance points of the wing and fuselage are the same. We then end up with an aircraft that is actually a wing or set of wings with a tail attached.

This eliminates all the adverse effects of a fuselage, but still allows us a place to put our engine, radio equipment, etc.

Because of the efficiency of this design and a large wing area, a small engine can be used while still maintaining high speed capabilities. The aircraft can also be built heavy (strong) and still maintain its capability of very slow flying without altitude loss.

A high wing monoplane constructed using these concepts is extremely stable in flight and makes an ideal beginner's aircraft. A biplane, on the other hand, is extremely maneuverable while still retaining a degree of stability not usually found in this type of aircraft..." 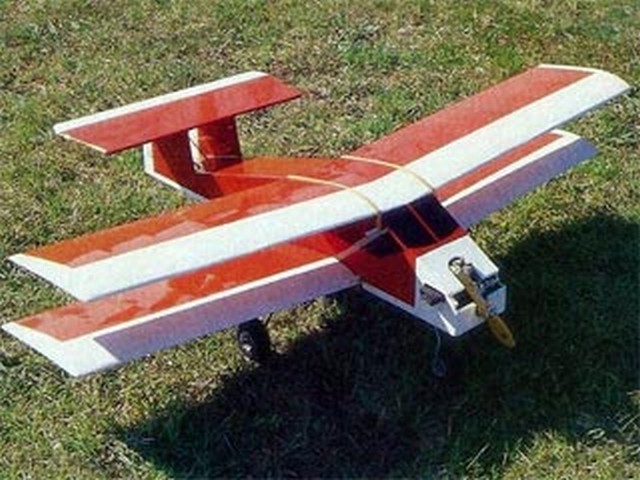