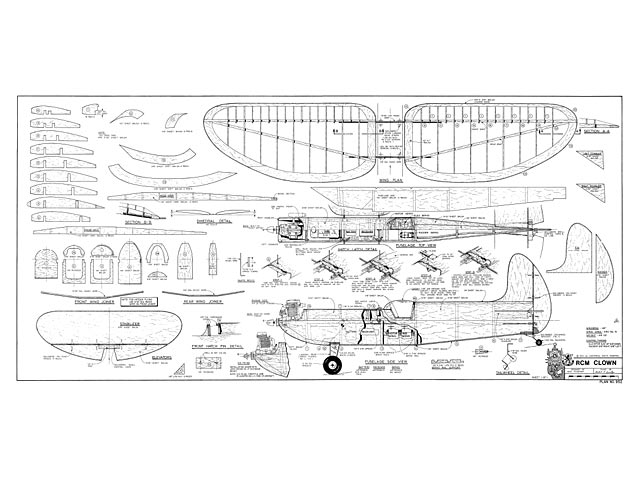 Quote: "Build this sport aircraft with a unique personality for .21 4-strokers or the .10-.15 2-stroke engines. Clown by Dick Tichenor.

With the availability of the .21 cu. in. 4-stroke engines, came a challenge for an airplane design that is aesthetically desirable while retaining the ease of building and with appropriate flight performance. Then it dawned on us that we already had a flight proven design that had not been published.

First off, let's recognize that from the dozens of kits and ARFs on the market, there are several that are suitable for these small 4-strokers. Our efforts are directed toward those who enjoy scratch building and possessing an aircraft that does not look like the mass produced designs.

It is very difficult to come up with an airplane configuration that hasn't been done before and our Clown is no exception. This is actually a rehash of an original Brown Jr powered free-flight model that I designed and built in 1938. The original created lots of funny remarks from my flying buddies back in those days and the Clown follows in the same itradition.

A three control approach is used with the Clown in the interest of simplicity yet the maneuverability is limited only by the pilot's imagination. An Airtronics XL Series six channel radio with three 94401 micro servos was used. The size of the micro servos allows generous space in the fuselage for moving the battery pack and receiver to obtain the proper balance. Don't worry about the output power of Airtronics micro servos. the 180 mph Formula I racers are using them on all controls with total reliability.

Our Clown was originally flown with a Fuji .099 2-stroke sleeve bearing engine from Hobby Shack. It was a lot of fun and really flew great. It had a lot of flying time and was getting a little ragged so a new fuselage and set of tail surfaces were built for the 4-strokers. The HP .21 was installed and we were well pleased with the additional power and better wind penetration as the weight had been increased about 5 ounces.

Early in 1985 O.S. announced their plans to produce a .21 cu. in. 4-stroke engine. We were fortunate to obtain one of the first shipments to the USA. Designated O.S. FS-20, the engine is a miniature version of its larger brothers with all of the desirable design and performance features we have come to expect from O.S. Having flown the FS-20 in a 66 oz. biplane and now in the 48 oz. Clown, I must say that it lives up to the O.S. reputation and I am extremely happy with the little jewel.

One very important step before starting to build the fuselage is to obtain the engine and engine mount that you intend to use. Compare the length of the assembled engine and mount with the plans while placing the back face of the mount to the forward side of the front bulkhead. Mark the propeller clearance desired and reshape (with a pencil) the fuselage nose accordingly.

We feel that with the amount of details shown on the plans and in the photos, step by step instructions are not necessary so we will only hit the high points.

The fuselage is basically of simple box construction with a bit of extra care required when installing the front bulkhead..." 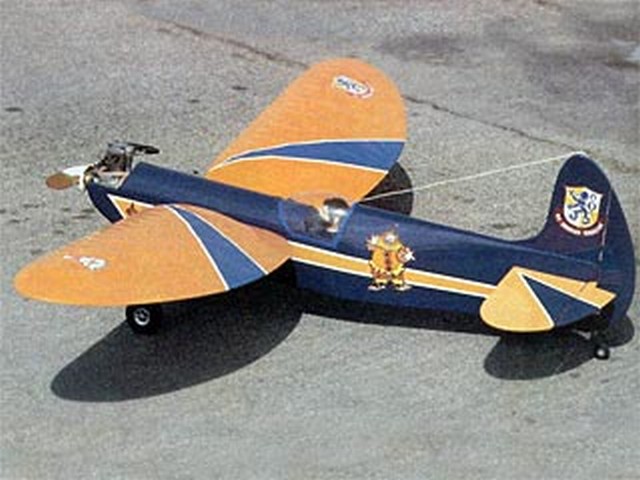