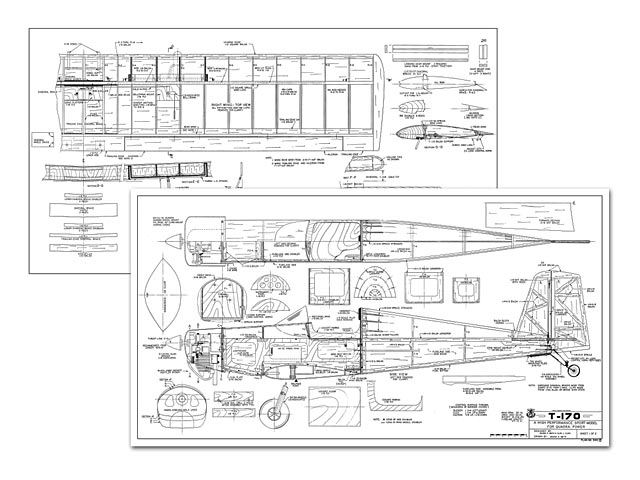 Quote: "The size of most 1/3 scale airplanes, this T-170 with a standard 2.0 cu in Quadra, is capable of putting on an excellent performance. T-170 by George R Smith.

There are a lot of larger airplanes flying today, using Quadras for power, whose performance is less than spectacular. Generally, this is because many of the larger airplanes were designed for size considerations alone and do not have an optimum mix of weight, wing loading, aspect ratio, and lift/drag ratio to obtain top flight performance from a 2.0 cu in engine. Where these considerations are left to chance, the results are likely to be disappointing and, usually, satisfaction can only be obtained by replacing the engine with one of larger displacement. I have found the Quadra to be am excellent, reliable engine but it has been mis-applied too many times.

The T-170 was specifically designed to be a correct application for this fine engine. It uses a well-proven design concept and it has been carefully adapted and sized for the task. The result is an aircraft the size of most 1/3 scale airplanes that is capable of excellent performance on a basic Quadra. As a matter of fact, the airplane from which the T-170 was adapted - Al Clark's Terrier (oz6559) from RCM March '84 - is an approximate 1/6 scale model of Al's concept for a full size home-built, so the T-170 might legitimately be called 1/3 scale. Al's Terrier achieved astounding performance with a .25 size engine even though the size of the airplane more closely resembles that of a .40 size trainer. This performance is directly creditable to Al's creative design and his careful mix of those design factors which produce the most performAnce from the available power. The possibility of achieving that kind of performance from a large aircraft using Quadra power fascinated me. The resulting T-170 was certainly satisfying.

Although the T-170 is large (100 in span, 1600 sq in. area), the weight is only 16-3/4 lbs resulting in a wing loading of 24 oz per sq ft - light for this size aircraft. This wing loading will allow short take-offs; slow landings; and stow, graceful, acrobatic maneuvers. Because of the large scale-like fuselage with open cockpit and the relatively thick, 15% airfoil, the level flight speed cannot get out or hand and, when flying aerobatics, the speed builds slowly even when you point the nose straight down. These characteristics allow complex, precision maneuvers to be performed even right down on the deck without producing the well-known 'white knuckleis' so prevalent with the 'powered bomb' type of aerobatic sport plane. You can relax and just have a heck of a good time.

As on the Terrier design, one of the real keys to the excellent 'performance of the T-170 is the airfoil, a modified NACA 2415. This airfoil exhibits a very smooth lift/drag curve (with no drag bucket) which provides very predictable handling in pitch at all speeds. This is not a symmetrical airfoil so a little down stick is required to fly inverted, but very little. Outside maneuvers are easily accomplished, requiring only a touch more control than the same maneuver accomplished in the inside mode. Also, on final approach, the sink rate is less and is more predictable than the sink rate with a symmetrical airfoil..."

Article pages, text and pics, thanks to davidterrell80. 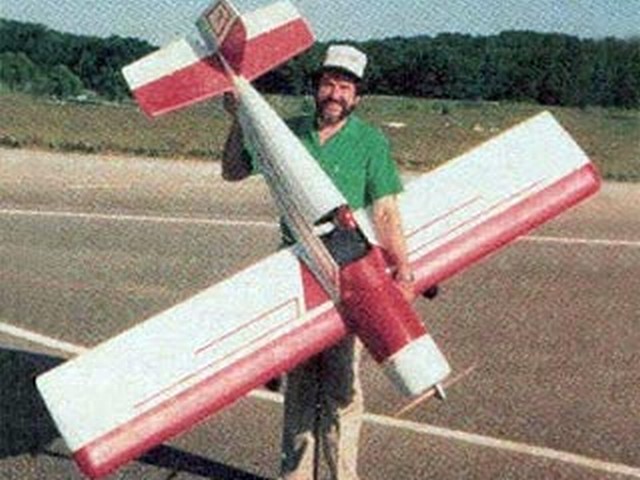 More of a question than a correction. In this plan, there is a full size (top to bottom of ribs); 1/8" dihedral brace (2 required) that spans through Ribs R1 and R2. There is no direct mention in the article that the use of that brace(s) would REQUIRE that R1 and R2 be installed as separate front and back sections in front of and behind the spar. Yet, there is mention that both of the R1 are to be glued together during building. Can you clarify how the inclusion of the 1/8 full height dihedral brace can be done and still have R1 and R2 remain as one-piece ribs?
CB - 30/07/2019
Hi CB. Sorry forgot the punchline: Saw through the centre ribs to fit the dihedral brace after joining the two half wings. A razor saw with the stiffening rib ground off part of the way can work for this job.
Arnold - 31/07/2019
In the plan there is typical rib profile. The dotted lines on the rib indicates the necessary cutting for ceantral ribs in coincidence with main dihedral brace and reinforcing doubler braces or spars. So the R1 and R2 has to be cut in two as for dotted lines notes on typical rib sketch. In any case on doubled R1 glued together you have to cut a portion for the servo bay, see on fuselage side view too. There is a way to mantain full rib and full dihedral brace, but this is not the case.
pit - 31/07/2019
Add a comment