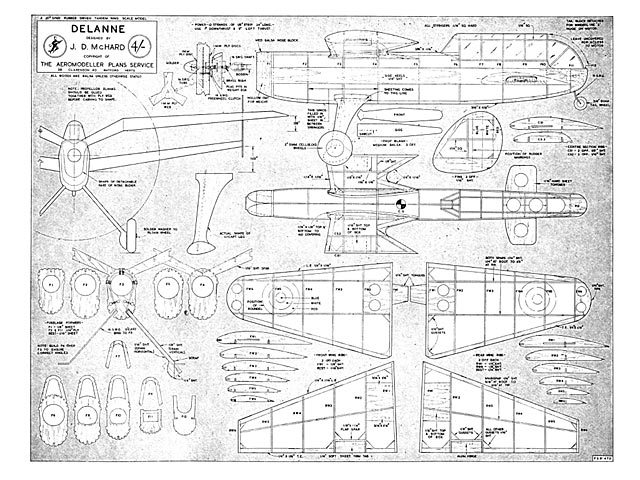 Not since September 1948, have we published a rubber driven flying scale model in these columns and we are glad to break the 44 months' gap with this reproduction of Corporal McHard's novel selection. Tandem wing monoplanes are unconventional whether flying scale or not. This one has proven itself an excellent flier and the prototype was actually built at Kai Tak airfield, Hong Kong.

The actual Delanne aircraft was constructed in France in 1938 as a two-seater fighter for probable use with the French L'Armee de L'Aire. Very little is known of the performance or production figures, so it may be presumed that the design did not progress further than the prototype stage.

The original models of the Delanne have been powered by both rubber and the KK CO2 engine. Both versions fly equally successfully. The model shown on the plan is the rubber-powered job, it is particularly adaptable to this type of power, owing to the long fuselage and the CG position - about midway between front and rear motor hooks.

Construction of the fuselage is the first step, this being the trickiest unit and also the 'foundation' for the mounting of the flying surfaces.

Start by cutting out two side keels of 1/16 in sheet balsa and mark the former positions on them with a soft pencil at this stage so as to get them both identical. Cut out slots for rear wing tongues, which are made from 1/16 in hard sheet balsa. Cut out top and bottom keels from 1/16 in sheet balsa and mark former positions on these also. Next cut all formers F1 - F12, noting carefully the material specified for each part, also grain direction. Former F4 should be built on top of the completed former F3 so as to ensure perfect dihedral and incidence settings for the wingstubs.

Start assembly by cementing the two side keels to former F12 on a flat surface, this will ensure the correct alignment of the fuselage. When com-pletely dry fix former F1 in position and allow it to dry before proceeding further. When you are satisfied about this step, cement all the rest of the formers and keels in position, working from prop to tail..."

Quote: "It was 4 years after the publication of the last rubber scale model that Aeromodeller published the Delanne from the pen of John McHard. As would be expected from John the design of this unusual tandem wing plane is exquisite and I hope my drawing does full credit to it. Of the original very is little known of the French plane, it is though that it never got beyond the prototype stage. Looking at it the plane though it has an appeal all of its own, bigger, radio and power certainly come to mind..." 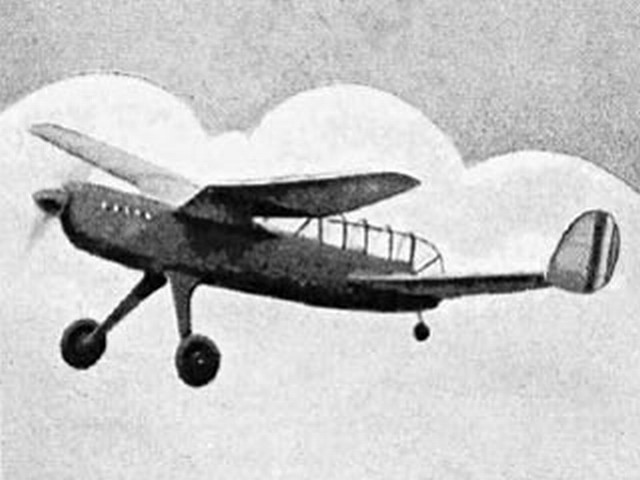