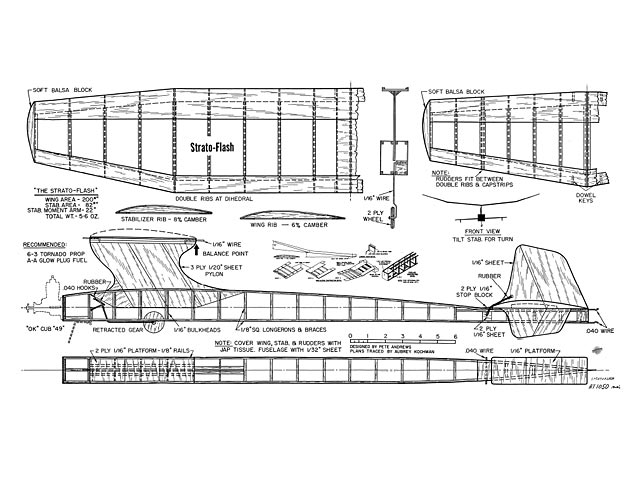 They laughed when I, the indoor addict, sat down to build a gassie, for they thought I didn't know which end of the broom to use as a glue stick, but look what resulted: a high-performance Class AA gassie with a wing loading of 2-1/2 ounces per hundred square inches, a minimum drag body consistent with ease of construction, a new super-duper slim pointed airfoil and wing construction, retracting landing gear, and a long stab moment arm making the Strato Flash climb like a homesick angel and glide like a seagull.

Designing a ship that does not require downthrust, sidethrust, up-thrust, warped wing, or turned rudders, and yet is very stable, with a fast climb and a low sinking speed was quite a job; I'll try to explain my procedure step by step.

Concentrating on the problem of airfoils, I realized there has not been much research on low-speed airfoils, so I fell back on my experiments with indoor airfoils and their characteristics. These experi-ments had convinced me that an airfoil with a sharp leading edge, and a smooth arc form of the upper camber of from 5% to 6% of the chord would give me the best results, especially when used on a wing whose aspect ratio was approximately 6 to 1.

To maintain a smooth airflow over the airfoil, I found it necessary to use sheet balsa to cover the forward rise of the upper camber as far back as possible without adding too much weight. This led me to the idea of using sheet leading and trailing edges, thereby saving quite a bit of weight without sacrificing strength. Due to the skin stress this con-struction properly made has less tendency to warp than the standard solid spar wing.

My next problem was to test the effects of varying camber sections in the stabilizer, and this led to rather pleasing results, for by varying the camber percentage in the stab I acquired control over the climb characteristics of the plane under power. This was another development of my indoor experiments, since they had shown that an 8% airfoil in the stab would furnish the best climb and the most stable flight pattern, while the 10% stab airfoil had too much lift effect during the climb, and the 6% airfoil in the stab resulted in an attitude of climb that could bring about a stall, and had an erratic flight pattern due to its unbalanced condition. I proved this point on my gassie for the 10% stab on the Strato-Flash made the plane fly level with the ground under full power, and the 8% stab airfoil as shown on the plans made the ship climb at an angle of approximately 50 degrees - which to my way of thinking results in the maximum altitude under full power.

The long stabilizer moment arm was necessary to insure stability under full power and to utilize the lift of the stabilizer. The pylon wing mount was used to reduce the angular difference between wing and stab and thus reduce profile drag, and to counteract the torque..." 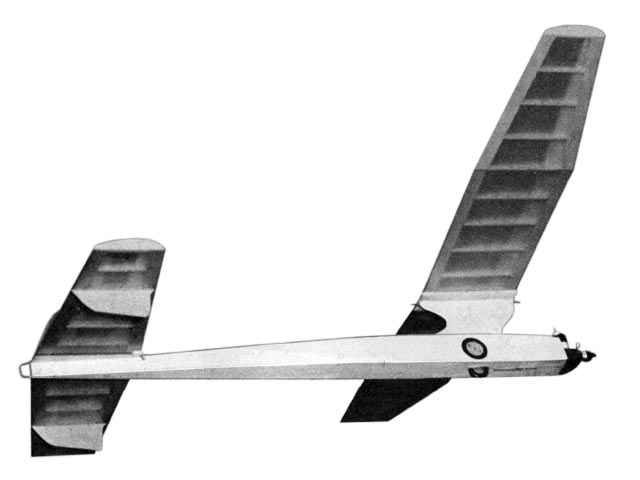