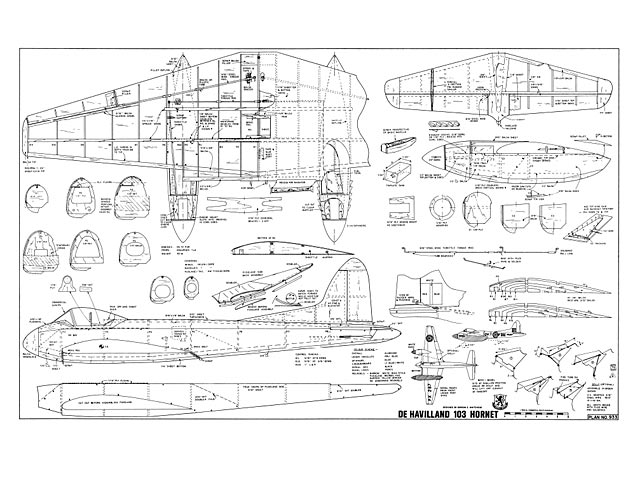 Quote: "The DH Hornet was the RAFs fastest ever piston engined airplane, with a top speed of 472 mph. Conceived in 1943 as a long range fighter for the Pacific Theatre, it arrived just too late for WW II but was eventually to earn its keep in the close air support role against Malayan terrorists. A Sea Hornet was developed for the Royal Navy, and three of these were flown at the 1948 International Air Exposition in New York where they gave a flying demonstration which included loops with first one, then both engines feathered.

Having flown a few hand launched belly-landed WW II single engine ships, one fact that I noted is the vulnerability of these models in a less than perfect landing. If the ground is bumpy, or if you have to land such a model cross wind or downwind, the result is often a cartwheel as one wing catches the ground and flips the model.

However, the wide-set nacelles of a twin are ideally placed to prevent the wing tips ever getting near the ground, and the Hornet is more ideal than most in this respect. It is fair to say that the experiment has been worthwhile. You can set this model down on a grass strip at frighteningly high speeds, say 40 mph at a guess, and the nacelles act like wide tracked landing skids, bringing her to rest quickly, stably and safely, though somewhat tempestuously if the ground is none too smooth.

So much for the landings. What about the take-off? Well, initially I used the dolly exclusively and the method proved reliable. Set up as indicated on the plans, she'll lift herself smoothly into the air when operating from paved runway, but needs slight up-stick from grass. However, these days it is all hand launch. There's just enough fuselage beneath the wing for a good hand-hold below the CG, and the twin set-up doesn't get oil spattered. A firm heave-ho and she's on her way.

Right. So we've found that we don't need a landing gear. Just how practical are two cheap and cheerful .10s for a twin? How well do they throttle and stay in sync? The answer here is that the engines aren't a perfect pair, and they don't always stay in sync; getting them to throttle from idle to full chat and back exactly in unison is just not possible.

Fortunately, neither of the last two points matter. As long as both engines can be made to slow down to a fast idle without stalling, and to pick up to full throttle without cutting out, then you're in business. As a matter of interest, one of my .10s will open up from idle instantaneously, while the other takes three or four seconds to come up to full rpm's. One engine will out turn the other on the ground by about 500 revs, but, once in the air, the slow engine unloads more than the fast one and they become more or less in sync.

When you pull the model vertical, one engine will often slow more than the other, and sometimes in loops one engine slows, but picks up on the dive out. When one engine stops, all you need to do is throttle back on the live one to about 1/3 throttle and then use the residual thrust to help the ship to glide into position for a landing. The nacelles are too wide set for comfortable flight on one engine, though I have experimented with single engined flight and will talk about that later.

From the foregoing, you'll gather that as regards to the power plants, this ship is far from the ideal that the uninitiated might think essential in terms of throttling and engine-out capability. But, believe me, it does not matter! You can buy two of these engines for about the same price as one .20 - you can build a fabulous looking twin for very little outlay, and you can have a ball. So let's build.

CONSTRUCTION: Wings: Make up four wing skins from 1/16 sheet. Sand the outer surfaces and then assemble the LE, ribs, spars torque rods, throttle snakes, etc., on each bottom skin. Join these assemblies with 1-3/4 in dihedral per panel and set one panel on the board shimmed with the required washout. Glue and pin the upper skin in place and set aside to dry. Repeat for the other panel, subsequently reinforcing the root joint with gauze and glue. Add the tip blocks, sand the wings to final section, and separate and hinge the ailerons.

Nacelles: When assembling the nacelles, note that they are right and left handed. I employed two soldered tin plate tanks, as clunk bottles won't fit. A disadvantage is no prolonged inverted flight, but I don't care. You can't shape the cowl top or add the nacelle top sheeting until each nacelle is in place on the wing, so just shape the nacelle underside for now..."

Article, thanks to SRQFlyer.
Article (RM) 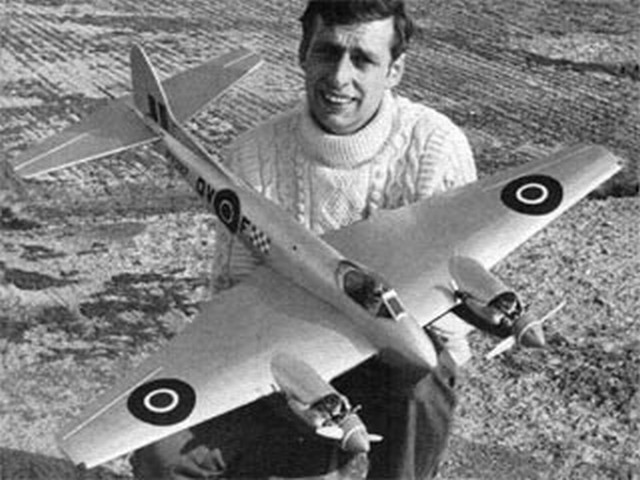 I've built two of the Gordon Whitehead DH-103's and it is a great flying/looking ship. I converted both of mine to electric and used a pair of Eflight Power 10's with 55amp ESCs on 2200mAh 3S with 9 x 4.5 props which gives plenty of thrust and a decent run time. I replaced the balsa where ever I thought it safe with light white foam, such as the nacelle tops, rear turtle deck and fin strake. BTW the take off trolley works a treat.
TD - 10/08/2019
Add a comment