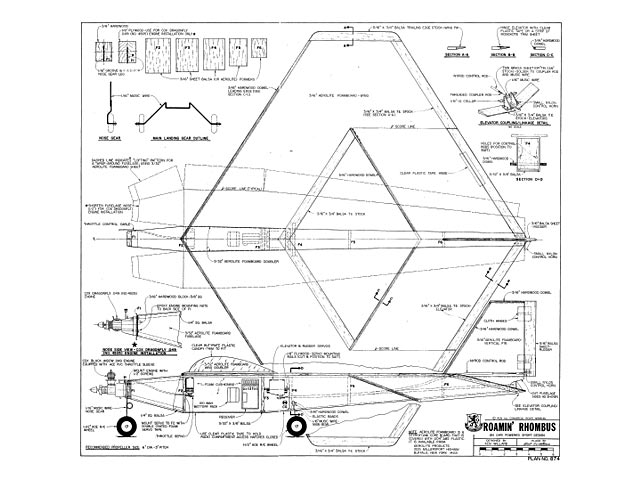 Quote: "This diamond wing concept is new to many modelers, however, it was first conceived in 1926. Ken designed an .049 powered model that proved to be not only an excellent flier but also very stable. Roamin Rhombus by Ken Willard.

As the saying goes, someone is always reinventing the wheel. That tendency is especially true in the field of aviation, where 'new' concepts keep springing up regularly. As an example, look at all the ultra light airplane designs. The designers claim, 'This concept is quite new, and has many advantages over conventional designs.' But a look at the historical efforts shows that there are virtually no really new designs - just variations on old concepts.

The diamond wing concept is one of the best examples. Consider this; the original diamond wing was conceived in 1926 by Norman Hall-Warren, an English experimenter. He patented the concept in 1937, but never was able to get enough money together to build anything but flying models.

In 1974 the United States Air Force released information regarding an 'Advanced Aircraft Design.' It was a variation on Hall-Warren's basic layout. More recently, Burt Rutan came out with his 'Predator,' a rhombus wing aircraft with some added wingspan at the tips. All new - and all old insofar as the basic concept is concerned. Rhombus wing models have been published before. In August 1969, RCM published a scale model of the Skycar (oz6551) which was designed by Normal Hall-Warren. A small .010 powered free flight variation was published in another periodical in 1976. Both models were excellent fliers.

About a year ago, Jim Moynihan came out with Aerolite foamboard. It differs from other foamboard material in that the inner styrofoam core is covered with .004 in thick ABS plastic. It is foolproof and waterproof, roughly equal in weight to medium grade balsa, and can be painted if you use a polyurethane base paint. Jim also came out with a special adhesive, called FasTac, which works very well. The material can also be bonded with Titebond, Elmer's Glue, and epoxy. Cyanoacrylate 'instant glue' can be used to bond the outer surface, but care must be used not to let the instant glue come in contact with the inner core, since the glue will dissolve the core.

This new material, Aerolite foamboard, can be used in many ways when building a model, but how about building a model which is almost entirely comprised of Aerolite? The rhombus shaped wing, or 'flying diamond,' is an ideal subject. So, the 'Roamin' Rhombus' was designed to take advantage of Aerolite's characteristics. Only a few tools are required, and the framework will take longer to dry than it does to cut out. Here's the simple step by step sequence..."

Article pages, text and pics, thanks to bullseye000. Note there are 2 articles, and the 2nd includes some more, detailed, drawings that show formers and layout. 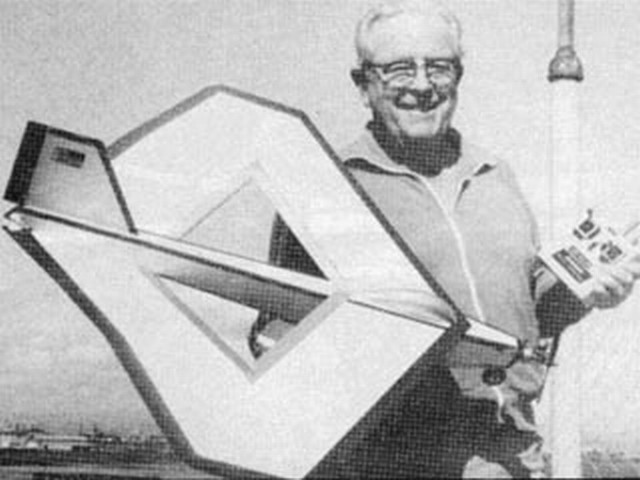