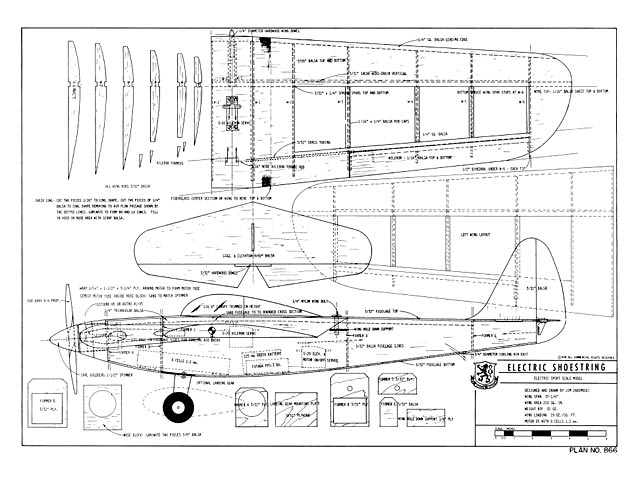 Quote: "Quote: "The Shoestring is no stranger to readers of RCM. In the January 1966 RCM, Carl Goldberg presented a 54in span Shoestring (oz1923) for .19 to .45 glow engines. This design later became a very popular Carl Goldberg Model's Shoestring (oz4210) kit which was in production for a great number of years. In the June 1972 issue of RCM, Fred Reese published his plan for a Quarter Midget Shoestring (oz7122). Both of these plans have been very popular with the scratch-building crowd over the years.

I have always liked the Shoestring. I first saw one of the Goldberg kits at a pylon race in the early seventies and fell in love with the yellow and red #16 paint scheme per the full scale Shoestring. Thus, in my search for a new aircraft to try the Leisure 05 and the Astro XL 05 in, I stumbled on to a 3-view of the Shoestring and instantly decided that it was going to fly electric. It is a natural. It is a shoulder wing rather than a low wing so that when the batteries are placed on the cabin floor the model is stable in the air. I had some doubts about a low wing pylon racer after a bad experience with a low wing BD-5 which liked to fly inverted better than it did to fly level. The Shoestring also has built-in cooling air intakes for the electric flight system by making the cheek cowls functional rather than decorative.

After a week on the drawing board, in early March 1981 the plans for the Shoestring were completed. Several prototypes were built and a few minor modifications were made. The result is a nice looking semi-scale pylon racer that will fly the entire Class A pattern. The original models were all powered by the Leisure 05 with 6 cell Sanyo batteries rated at 1.2 ah. The flight duration of this combination is in the seven to eight minute range. One of the advantages of the 6 cell 05 system is that the motor retains almost full rpm's until the last thirty seconds of the powered portion of the flight. The only disadvantage is that it takes about twenty minutes to recharge. The Leisure motor comes in two different winds, at least at the time this article was written. The pattern wind will turn a Cox gray 6/4 prop at 12,000 rpm. The racing wind will turn the same prop at 13,500 rpm. While the Shoestring flies nicely with the pattern wind, the performance is enhanced tremendously with the hotter racing motor.

The Electric Shoestring prototypes have weighed in at a range from 32 to 34 ounces. Radio selection plays a big part in weight control of electric models. The model featured in the photographs accompanying this article used a Futaba FPS-3 radio with three S-20 servos and a 225 ma flight pack. The system weight is about 6 oz. Try to select a radio that will meet or beat this weight.

The other key to a good flying electric model is building the model as light as possible. Wood selection is important but I feel the application of adhesives plays an equally important role in achieving a strong but featherweight air frame. In the last year I have decided that there are only two adhesives for me - Super Jet and 5-Minute epoxy. I have virtually built a half a dozen models including the Electric Shoestring with this dynamic duo. The result is always a strong light model which can be reproduced quite quickly because with cyanoacrylate and fast curing epoxies you just don't have to wait around for the glue to dry. 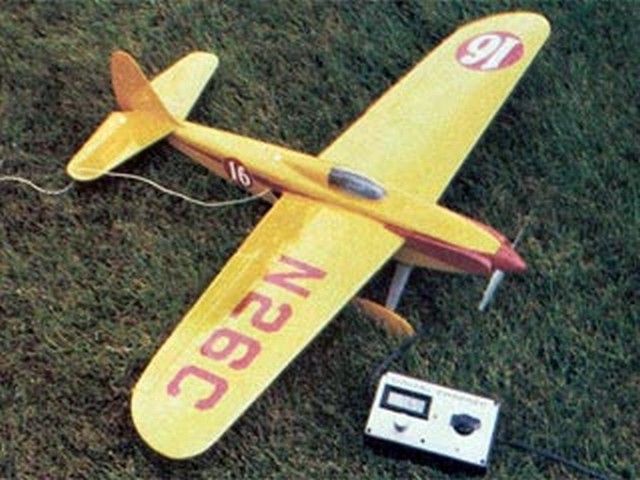