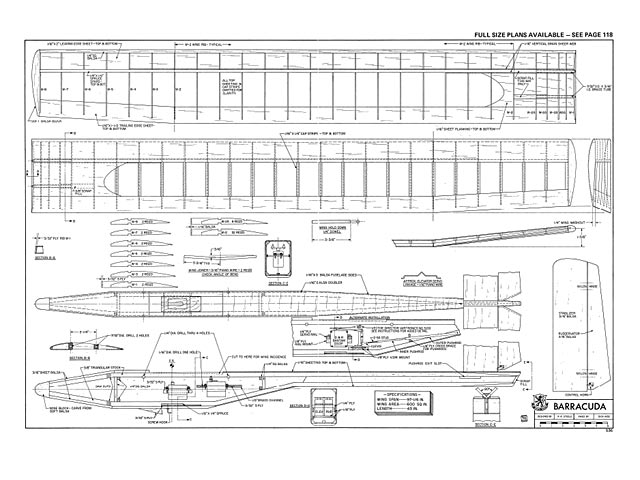 Quote: "A simple to build, light weight, easy to fly Standard Class competition sailplane of maximimum allowable size. Although highly competitive for the proficient flyer, the Barracuda can easily be trimmed out as an ideal soaring trainer.

To me (and apparently many others) there is nothing so beautiful in the world of modeling as a sailplane floating gently in a sun-drenched summer sky.

I had known this thrill from having flown free flight models some twenty years ago but having switched to R/C in the early fifties, I had somewhat forgotten it. Eventually I became bored with roaring .60 engines and the sameness of every pattern flight. When this happened I cast around for something new and discovered R/C soaring. I built a home-brew special with a free flight wing and an .09 engine up front (no one told me about electric winches) and rediscovered the pleasure of thermal hunting.

The next winter I built a Cirrus (oz8532) and learned a lot about R/C soaring. Learning how to make a Cirrus go where you want it to is an accomplishment in itself. I finally flew the plane to fourth place in Open Class Precision at the 1972 Nats. This contest, incidentally, taught me that it is much easier to win in Standard Class than in Open since two thirds of the contestants enter Open Class.

In order to have a competitive plane to fly in Standard Class contests, I designed the Barracuda around certain parameters:

All these criteria were achieved and a truly great model developed. The plane is truly competitive in Standard Class yet is simple to build and fly for the beginner making it an ideal trainer. The vee-tail was used for several reasons, including lightness, ease of installation (no flying stab to worry about), simple construction, and ease of transportation. The fuselage is just a reinforced box with no formers needed, wing mounting is by rubber bands for simplicity sake, the wing is strong enough for any type launch (we use Soaring Enterprises electric winch and reel), yet is easy to build since all ribs start from the same pattern.

Several of the planes have been built by modelers in the area and all have performed well. To start construction, order the full size plans and then go to the hobby shop and get the following..." 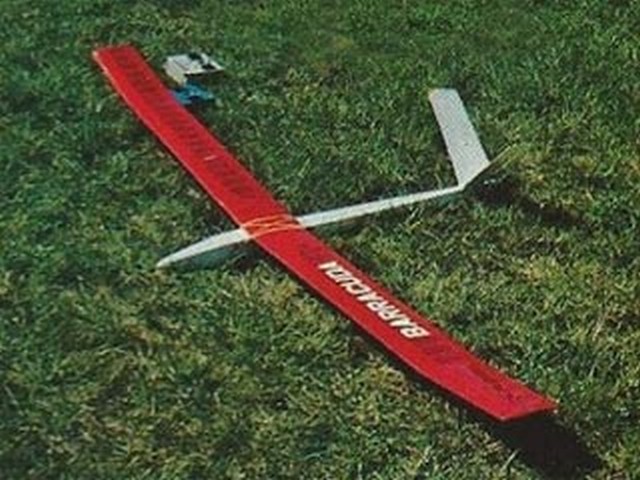