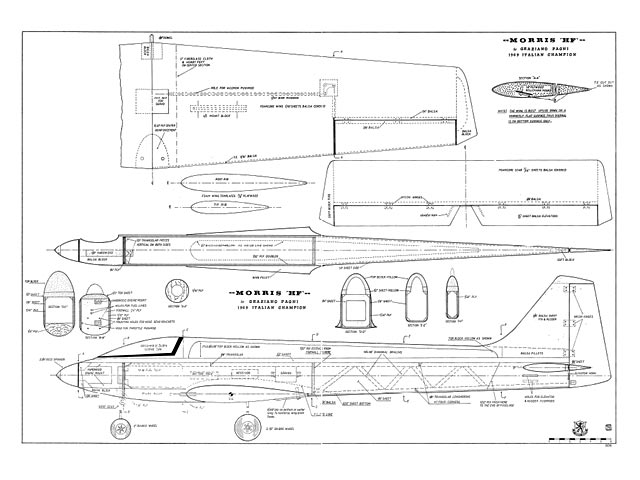 Quote: "From one of the world's leading competition flyers and member of the Italian International Team comes this top contender for pattern honours. Flown in two consecutive World Championships, the Morris HF is an FAI thoroughbred that can put you over the top in this year's pattern competition.

It is a true pleasure to have the opportunity of presenting the plans of my latest model, the Morris HF to the readers of R/C Modeler Magazine. Two years ago I specifically designed this plane in an attempt to achieve a superior performance in the FM aerobatics program. I named the plane Morris in honor of my older son and HF for High. Fuselage or, if you prefer, for High Fidelity.

With this plane I managed to win the Italian National R/C Champion-ships in 1969 and was happy to place 20th during the Internationals, a truly good place for a non-professional flyer, such as I.

This model is the latest version of the Morris series and is a result of previous experience with several pattern models. For the HF, I used the same symmetrical airfoil of the older models which I believed more suitable for the FM pattern. Furthermore, I kept the same long tail moment, modifying only the shape of the wing and of the fuselage profile. The previous prototypes of the Morris utilized rectangular wing planforms which are very reliable during the 'round' maneuvers such as loops, eights, etc., but a little less desirable during the rolling maneuvers such as axial rolls, Cuban Eights, and the Rolling Circle.

In order to get a tapered wing with the same characteristics of the rectangular planform, I designed a tapered wing with the taper equally distributed along the leading and trailing edges. The airfoils were chosen to have a slim 14% thick section at the root and a 16% section at the tips. This helps avoid wing tip stalls and gave the plane a tail-low landing attitude for slow and graceful landings. However, when suf-ficient rudder is applied, the model spins readily and if, during a spin, controls are released, it recovers immediately. Using a progressive airfoil, tail slides are also substantially improved. In order to perform smooth man-euvers it is necessary to have good penetrating ability and the thickness of the airfoil counts. If the airfoil is too thin, however, the model easily resembles a 'bomb' and this is definitely a detriment in view of European judging standards. With its symmetrical airfoil the HF is able to fly in the same manner right side up or inverted. I chose short center-hinged ailerons with no differential in order to perform better rolls, while the one degree of dihedral is adequate for good out-side loops, inverted flights and rolls.

The fuselage is narrow and high for its length with the highest point at the center of gravity in order to perform knife-edge flight and to increase directional stability. The rudder surface is quite ample and this supports execution of the Double Stall Turn, Slow Roll, Tail Slide, as well as Spin maneuvers. Normally, I use a 70/75 g/dmg wing loading since I prefer the heavier loaded models since they fly easier in the wind and even better in still air. However, in order to avoid the troubles associated with large and excessively heavy models, I reduced the dimensions of the previous prototypes and used, on the HF, a new lighter radio, the EK Logictrol, and a more powerful engine, the Super Tigre G.60, which has ' proven to be completely dependable and powerful - a very important goal for a modern pattern contest ship.

The HF is easy to build and so I will present only the essential construction notes.

WING: Cut out the wing cores from a block of styrofoam by the normal hot wire method and draw on your cores the outline of the ailerons, bellcranks, pushrods, and landing gear. Next, cut out the shell for the aileron bellcranks and the tunnels for the pushrods. Before the sheeting is applied to the wing cores, glue the 1/8 plywood bellcrank mounts, the landing gear trunion blocks and install your push-rods.

After the wing is sheeted, glue the tip blocks in place. These should be carved from soft balsa and hollowed for lightness. After a fine sanding over the entire surface of the wing, cut out the ailerons and glue the balsa blocks in place for the hinges. Next, sand the front part of the ailerons to a tri-angular form with the hinges at the center. Epoxy the aileron horns in place and then sand the root section of the wings to provide the desired dihedral. Join the wing panels together upside down on a flat surface so that dihedral will result from the decreasing thickness of the airfoil. To reinforce the wing hold down area, use 1/8 plywood. In addition, wrap the center section with a strip of fiberglass cloth tape.

STABILIZER: The stabilizer is constructed just like the wing using 1/16 balsa sheet-ing to cover the one piece styrofoam core. The elevator is carved from 1/2 in balsa sheet and sanded to airfoil shape.

FIN AND RUDDER: Carve these from 1/2 in balsa sheet
and then sand to the shape shown on the plans.

FUSELAGE: Cut the fuselage sides from 1/8 balsa sheet and add doublers from the firewall to the trailing edge of the wing using 1/32 plywood. Reinforce the tail area with 1/32 plywood doublers as well. Now, add the 1/8 x 3/8 diagonal bracing and the 3/8 triangular longerons at the four corners.

Hold the fuselage sides upside down directly over the top plan view of the fuselage. Pin this to a flat surface and epoxy the sides to the IV plywood firewall and the 44" balsa bulkhead. When the glue is dry, pull the tail together and glue it and the bottom sheeting in place.

To form the top of the fuselage, glue the 1/2 in sheet cover in place as well as the top block which should be hollowed as shown on the plans. Epoxy the 5/8 hardwood engine mount and all the balsa blocks that form the nose contours. Eventually, to add strength, cover the nose area with lightweight fiberglass cloth and epoxy glue after it has been finish sanded. Now, glue the pre-cut balsa wing fillets to the fuselage and sand them in place when the glue has dried. These Karmann fillets increase the aero-dynamic performance of the model to a great degree, avoiding turbulence and drag around the area where the wing joins the fuselage. They also improve the overall appearance and strength of the model..." 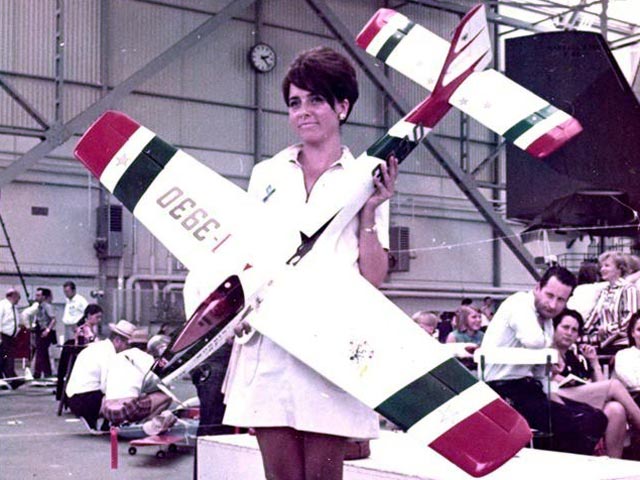 Added colour photo of Morris HF (Graziano Pagni's Morris HF at 1969 Bremen World Championship) thanks to to gghisleri who posted it on RCGroups, see https://www.rcgroups.com/forums/showthread.php?2969748-Pictures-from-old-japanese-magazines/page15#post38751132, also thanks to RFJ for finding it.
SteveWMD - 20/08/2019
Add a comment