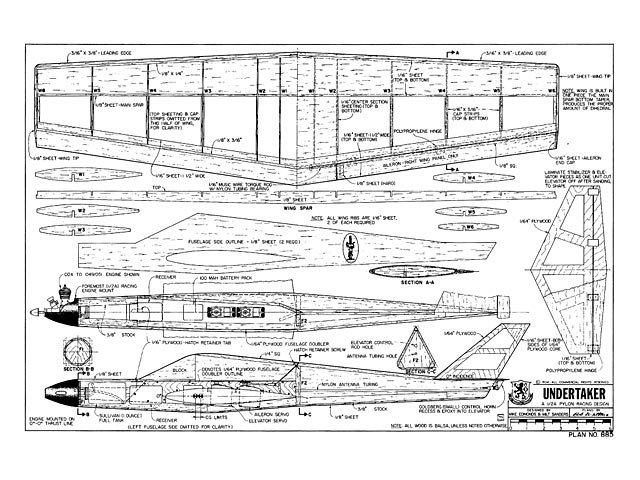 Quote: "Built around Foremost's 1/2A engine mount, this pylon racer was designed to help you do away with your competition By Milton R Sanders and Mike Edmonds.

Here is an airplane designed to help you put away your racing opponent for good (or at least until he builds an Undertaker of his own). This machine, like an Indy Formula One, is designed for all-out racing. The lines are clean and all drag-producing items have been cut to a minimum. From the 1/2A Foremost engine mount and laminar flow wing (641A012) to the triangular fuselage and enclosed linkages, this aircraft is built to race. It won't disappoint you.

The birth of the Undertaker resulted from a sudden desire to compete and the creative thinking of the racing team's chief design engineer, Mike Edmonds. In my 27 years of modeling, I have been a Saturday flier with brief periods of combat and pattern competition. Several months ago, members of the Mid State RC Club (Louisiana) started 1/2A racing, and the bug hit me too. All l could think about for several days was racing. Having previously worked on original designs, I decided to try again. Two weeks later, Mike had two prototypes put together, one ready to fly and the other ready for me to paint. I supplied the engine mounts, fuel tanks, and built the tail surfaces (Mike is the faster builder).

Thursday, after work, was the day chosen for the trim flights. As the Undertaker accelerated out of the launch, it was immediately apparent that I had a very fast, tail heavy aircraft with too much control deflection. After 15 seconds of attempted control, I rolled inverted and applied down elevator, The engine finally quit after three quick outside loops and I sighed with relief as the aircraft slid softly onto the grass.

A quick trip to the shop shifted the CG 1/4 in forward and cut down all control throws. The next flights were pure joy with arrow straight flight and very sharp high speed turns. Power off glides are deceptively that because of the. large speed differential between powered and gliding flight, A little care must be taken to slow down for landing until the. flier is familiar with the Undertaker's characteristics.

After our trim flights, we took th Undertaker to the club field the following Saturday. The pylons had just been set up and a few guys were waiting for more to show up to race... "