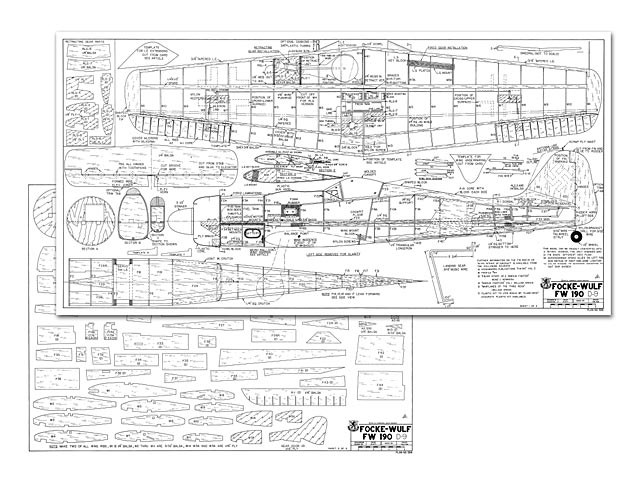 Quote: "Dave Platt presents an off-beat aircraft that is a masterpiece in realism. Focke-Wulf Fw 190 D-9.

One of the requirements that manufacturers list when considering subjects for a new scale kit, is that the plane should be well-known. In some ways, this attitude is not very complimentary to modelers since it assumes the kit will only sell if the customer is familiar with the plane already. Put another way, it is feared that modelers are dumb enough to refuse a possibly excellent model rather than be educated to something they didn't know.

Before anyone gets mad about this, let us admit that when the investment in a new product runs into many thousands of dollars, some caution is understandable. The manufacturer feels he doesn't need any built-in disadvantages to help him lose his shirt on a new model. All indicators, as far as can be determined, should be positive. And yet, although an established favorite often outsells a more off-beat subject, there are scale fans who say that you can tell the level of a modeler's sophistication by the ships he makes - meaning that the worn out subjects are for beginners, while the esoteric types are for the connoisseurs and experts.

I candidly don't know if any of this is true, but if so, is there a compromise to be found anywhere? Could there be some plane that is well-known, and yet qualifies as interesting, off-beat and having the 'expert' flavor? The Focke-Wulfe 190 D-9 is such a subject.

No fighter from World War II is more famous than the FW 190. Both its quality as a weapon, and the manner in which its superb design influenced fighter thinking everywhere, have become legendary. Even so, as good as it was, the FW 190 was not beyond further development. The P-51 and the Japanese Kawasaki 61 Tony had both been improved vastly by almost accidental engine changes. This happened again in the case of the FW 190, the switch from the BMW radial 'fighter' engine to the Junkers in-line 'bomber' engine giving a great boost in performance. Also - to us the most interesting part of the story - the looks of the aircraft dramatically changed; in place of the crisp and pleasant lines of the A-series, the D's long nose and tail, and exaggerated gun-breech fairings, gave a malevolent and evil appearance, adding a lot to the character of the airplane.

At the time when this model was designed, it was uncertain whether it would ever be kitted, due to the factors previously mentioned. However, a combination of the Nats win in Stand-Off Scale and a quite unexpected level of interest in the model itself dictated events. We're rather heartened that a subject from left field can be popular when all the vibes are right. The future looks good for further deviations from the corny old standards.

Aerodynamics. The force arrangement used in this model is as follows: Engine straight ahead (no down or side thrust). The semi-symmetrical wing is mounted at +2° incidence and the stab at +1-1/2°, giving a zero-zero alignment resultant when the 2° washout is considered. This is exactly the same set-up we used in the past two or three designs and has proven itself very reliable. Especially good is the low speed stability of the model. You can reduce the throttle and increase the up elevator until the ship is hanging at a very high angle, moving so slowly that most ships would have flicked onto their backs long before. Apart from the novelty of hovering the model, there is little real usefulness in having so low a stall speed, but it sure gives a good feeling of security when making slow landings.

For some reason, perhaps the very long tail moment, this ship is quite exceptionally smooth. This writer isn't exactly known as the world's greatest pilot, but has had no trouble in beating 80 points flight score in each contest entered.

Construction. For the modeler who has a few balsa-built aircraft in his past, this model will present no problems. Absolute newcomers to the hobby should wait; scale RC loses too many potential adherents because of failure caused by inexperience.

The wing should be built first as it will be needed to complete the last stages of the fuselage. The 2° washout comes in automatically due to the 'jig' strip laid on the plans while building and sheeting.

The fuselage is built around a basic horizontal crutch. The top formers are glued to the crutch, then the upper half is skinned. After removal from the board, the lower former halves are added and skinned..."

Update 14/01/2020: Added kit review of the Top Flite kit, by Steve Curry from RCM Oct 2002, thanks to JHatton, MichaelW. This is very long and thorough, with lots of pics, and is essentially a detailed build article. 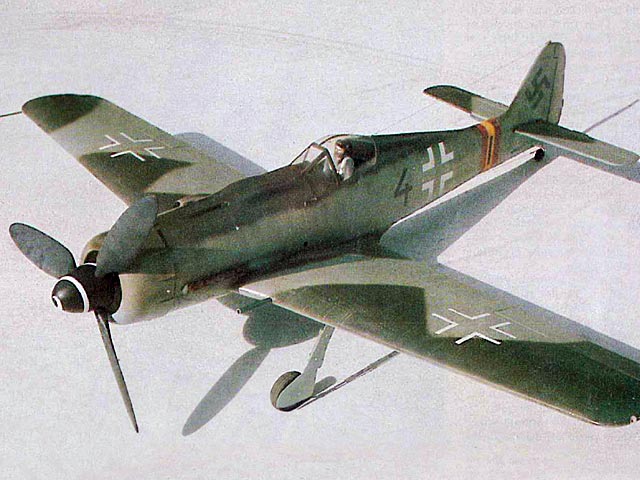 It should be noted the Platt version has painfully noticeable 'out-of-scale' issues, such as the cockpit location relative to the wing.
CPMcGraw - 18/08/2016
Compared the plan with this 3-View source: FW190_D9_3Seiten_Wiki. To me it looks sufficiently scale, to say the least.
Hubert - 19/08/2016
Unfortunately the article is incomplete, the last page(s) detailing construction are missing. I built this from a PICA kit years ago and it is so impressive in the air. I regret selling it and would really like to build another.
MichaelW - 08/01/2020
Ah, I see now. Thanks Michael. The original article we have here is actually complete, what you have here is the later 2002 RCM "in detail" review of the Top Flite kit, as opposed to the RCM plan. But that is indeed an excellent and useful article. Have added that too now, as a supplement file. Thanks again.
SteveWMD - 14/01/2020
Add a comment