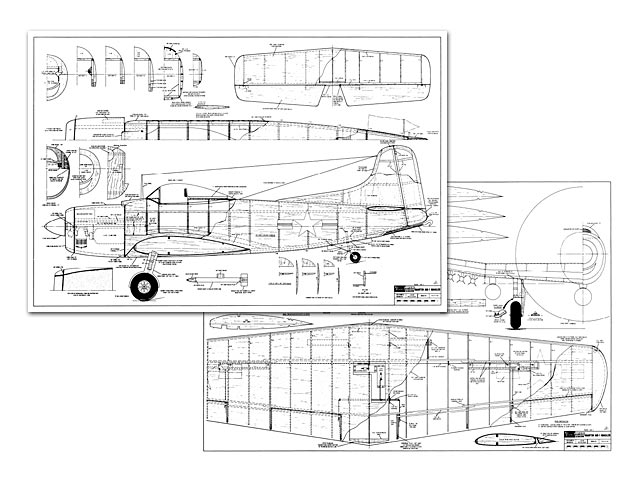 This plan was published in the RCM Book 'The Challenge of Radio Control Scale'.

Navy torpedo bombers are nearly always excellent scale model subjects. Necessarily big airplanes in order to lift the load, this gives a reasonable amount of wing area for any selected span without having a barrel-like fuselage to drag along, as is usually the case with a fighter type. Then, too, the handling requirements of landing on a pitching carrier deck dictates the use of large tail surfaces and thick wing sections for good low speed characteristics - all tailor made items for R/C scale work.

'Able Mabel,' as the Martin AM-1 was dubbed by carrier crews, has the best of the usual torp bomber features and is attractive and colorful as well. Designed around the 4-row 3,000 hp Pratt and Whitney R-4360 Wasp Major in the closing days of World War II, the first production model was flown in November 1946. Built for the same sort of mission as the Douglas AD, postwar cuts in Navy budget money forced a choice between the two and the Skyraider won the toss. More than 3,000 'Super-Spads' were subsequently built and they went on to become the ageless stars of the Korean War and the Viet Nam action. The relatively few Maulers built (149) before cancellation were soon retired to reserve status and were familiar sights at various NAS's for years. But as a model the Mauler has it all over the Sky-raider, with smaller frontal area and considerably more wing area when built to the same scale.

My version of Mabel was built in 1959 and has been periodically flown since at contests, R/C picnics, demon-strations and for fun. Though a real veteran model, practically an 'Old-Timer' in the fairly young event, it can still hold its own in competition. Most recent win was at the 1966 McDonnell R/C Club's Annual Meet Scale Event in St Louis, August 27-28. Like the prototype (which lifted off nearly 11,000 lbs), the model will lug all kinds of garbage under the wings in the form of rockets, bombs, torpedoes, tanks, etc, all good for appearance and scale operations point. There's 950 squares of good thick area there and my AM-1 has been loaded down to over 12 pounds and taken off, flown and landed easily. It can get off most any kind of runway, rough or smooth, and stability and control response are very good. Until 1966 it was flown with reeds, then Bonner propo was installed.

The first thing any good scale builder should do when beginning a model is to do a little research work and round up an assortment of photos. No plan can show the various little details and shapes as well as pictures and you just can't give your project that touch of reality without plenty for reference. They will also be handy in preparing your scale presentation for the judges and worth points in this category.

Here are some good sources on the Mauler:

The markings on my version came from photos by noted aviation historian and author, William T Larkins. (Another airplane of the same squadron appears in Navy photo 706607.) A color photo of the ship appears in the book 'The Pratt and Whitney Story.' The airplane is all gloss dark blue (Corsair blue), standard for naval airplanes of the period. Armament is light grey with red noses on rockets and torpedoes, yellow noses on bombs. Red stripe on the white insignia bars. Two types of props are seen on Maulers, paddle blades with square tips and rounded tip with cuff near the hub - color matt black with gloss yellow tips.

A three view appears in the August 1948 Model Airplane News and also a Flying Models of the same period. Since there were detail variations in the general arrangement drawings (a very common problem), photos were used as final authority for landing gear, arrestor hook, built-in right thrust, etc. I was able to borrow the pilot's handbook - a real rarity - (Thank you, Ron Gerdes!) and made copy photos of the cockpit detail and will be glad to provide these at cost of prints. Also I would be glad to answer any question about the model - enclose SAE and write to me at Rural Route 5, Ottumwa, Iowa 52501.

The original version was built from that well known Iowa product, Sig Balsa. Though not as hard to get balanced out (CG - 33 to 35% of average chord) as many scales, be careful not to pile a lot of rock hard balsa in the tall end! In fact, given the strength of the deep, full planked structure, the whole ship can be built from Contest weight wood except for wing spars and stringers. Looking critically at a 7 year old model, only two changes were necessary to bring it fully up to date. Standard setup way-back-when was dowels and rubber bands, but with our present selection of cam-locs and nylon screws you will no doubt want to dispense with that appear-ance spoiling feature. Likewise the part open silkwork with capstrips. Since the glue is already there the only thing saved by this expedient was the wood between the ribs - an inconsequential amount of weight when you consider how it compromises the scale effect. It also makes it hard to sand the finish with all those edges, to full planking is specified on the plans..."

Note the higher resolution plan at Martin AM Mauler (oz5015) seems almost identical to this one, with some cosmetic differences of layout and a different title block. But that scan is clearer, and will give a better print. 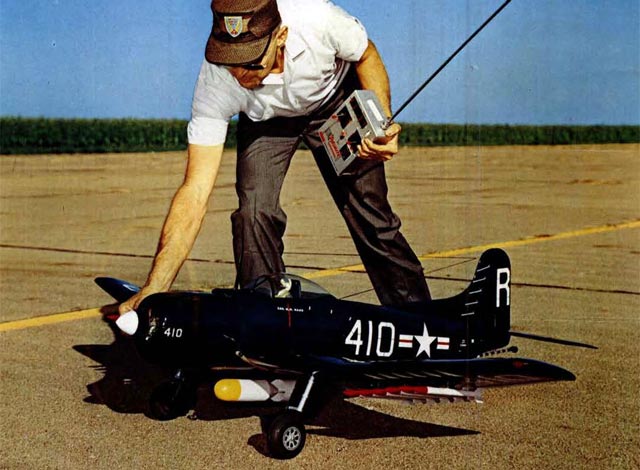