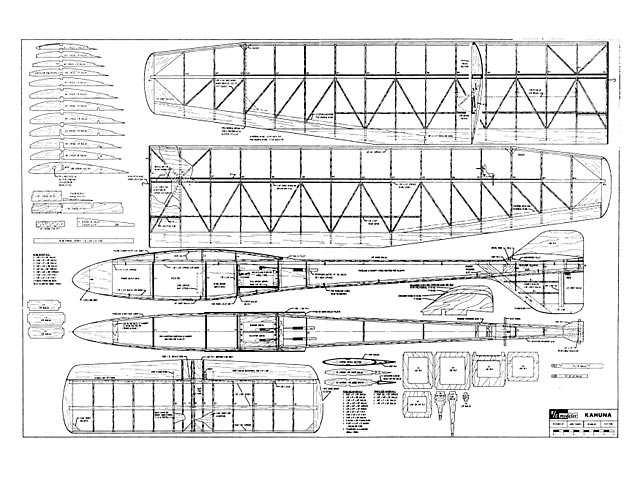 Quote: "This two-part article will show you how to build a general purpose sailplane for medium wind conditions. This version of the Big K has been picked because it has no vices or hidden defects to cause you trouble. If you build it according to the plan it will fly on the very first attempt. Aeveral version of the Kahuna have been flying since 1957. Most have been rudder-elevator machiones, but some have been converted to full multi.

The basic design of the big K was laid out in 1955 or 56 as closely as I can remember and the first three were begun in 1957 I think. The design followed the then nordic philosophy. The underslung fin has definitely proved to be more effective than the more conventional position. The order of merit being something like 20%. Other designs achieve a similar effect by placing the tailplane atop the fin as a large portion of the interference problem seems to be generated by the upper surface of the tailplane. Wing chord was increased because of the higher wing loading of a controlled aircraft and the greater airspeed will extract more lift over a longer chordline.

Airfoil section has been varied and only two or three Kahunas have had the same airfoil. The original section (#1 in Dia. 3) was the 'Thing to use' back in '57. Sections #2 and #3 are used on current thermal machines and sections #4 and #5 on penetrators and stunt gliders. Section #6 is the one used on this version of Kahuna and was chosen because it doesn't have any unusual changes of lift or drag over a wide range of operating conditions. It is simple to build and cover and will give you all of the performance you can probably extract from it. Exotic airfoils are only of noticeable superiority in the hands of experts and on specialized machines.

Kahuna's wing is polyhedral for rudder only flying and can be used for multi as well although there is very little reason to use polyhedral on a plane with ailerons. My own K is rudder-elevator only with eight foot polyhedrals for a special purpose connected with that mysterious 'weather vane' atop the fin. Ridge runners fly a 'beat' or track back and forth along the lift zone of the hill or cliff edge. If the wind is high or the hill low there will be a considerable horizontal component present in the wind and the flyer will be called upon to make continuous correc-tions of the flight path by blipping 'weather' rudder to keep the plane headed enough into the wind so it won't blow away. While trimming Nordics I had noticed a condition of trim which would be of use under these conditions. It certainly was not of any use on Nordics and we had a few things to say about it at the time. This system works best on gentle slopes and in steady wind conditions. The steering vane provides enough additional fin area that the plane tends to turn into the wind . The polyhedral tips (or considerable dihedral also works) tend to bank the plane away from the wind if the plane is flying across the wind. These forces tend to balance out at an angle of somewhere between 40 and 60 degrees if the vane is carefully trimmed in size. The glider will then hold this fixed heading and crab along the ridge (diag. 4). Wind speed and angle of upward flow modify the effect so that at time rudder control will still be needed to keep the plane on course. With the steering vane in place you will have three stable conditions. Dead into the wind, and right or left at what-ever angle your plane trims out to. Flying a beat then consists of simply turning the plane into the wind at the end of the beat and letting up on con-trol as it swings by the trimmed angle. It will then yaw back into the wind and begin the next pass. Heavy gliders don't respond too well to this system. The plane is rather stiff on control with the vane so removing it for normal flying is advised.

My original Kahuna is still flying. It took me two years to build mine and in that time two others were built and washed out by the builders. They have since made more exotic versions. The normal building time isn't two years. I just happen to be rather slow. I'm beginning to wish I could prang the thing, for I'd like to build several other things I've designed but the K and the present Enterprise crowd me as it is. The moral is evidently - build weakly, so you can build again!

Read the article to the end. Look over the plans carefully. Read the article again. Make sure you understand. Decide exactly what you want your model to be like and then cross off any parts or modifications you don't need so you don't end up with two left wings. I'd suggest you stick to straight wings unless you are building a rudder only version. If you are going to use servos, build the eight footer. If you don't have a work area long enough to lay out the fuselage or wings all at one time, do what I did, build half at a time and let the rest hang over the edge. I built mine on a two by three foot drawing board and I drew these plans on a board only two feet each way.

Begin construction by splicing everything that isn't long enough. If you lay things out correctly you can get both fuselage sides out of two three foot long boards by laying the sides out tail to tail. Cut out all the plywood parts. Make the wing tongue out of good hard dural or steel. Make two tongues just in case. Try to stay away from dural if you can for it has a habit of binding in the wing tunnels and there is nothing more annoying than an eight foot sail-plane with non detachable wings fifty miles from home by VW. Graphite or silicone grease might help. My tunnels are brass and my tongue is dural. Per-haps tin tunnels wouldn't have this problem. The wing tunnels are bent from tin or brass. Solder the seam if you are able to.

The method of attaching the wings may dismay you. They are not knock off. But then again they are not 'fold up' which is the main intent. I've seen both plywood and dural wing tongues of the more common type collapse on pull-outs. So far this system hasn't. The tongue should fit fairly tightly in the tunnels, but don't worry if it doesn't. My own buzzard has been flying, yea, these many years with no restraint on the wings at all and the most I've ever experienced is a quarter of an inch sep-aration from the fuselage from time to time. There are hooks in the wing roots over which you can slip a rubber band or '0' ring if you wish to hold the wings on more definitely..."

Quote:- "New scan from magazine. I disassembled the magazine to reduce the gap. But it was in blue ink on a blue-gray halftone background. It took some playing with a color scan... By skewing the green channel, I almost washed out all of the little dots. I believe it's better than the one we had before." 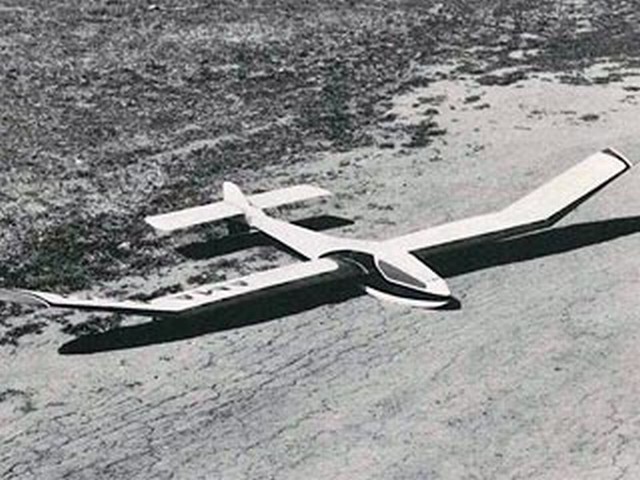