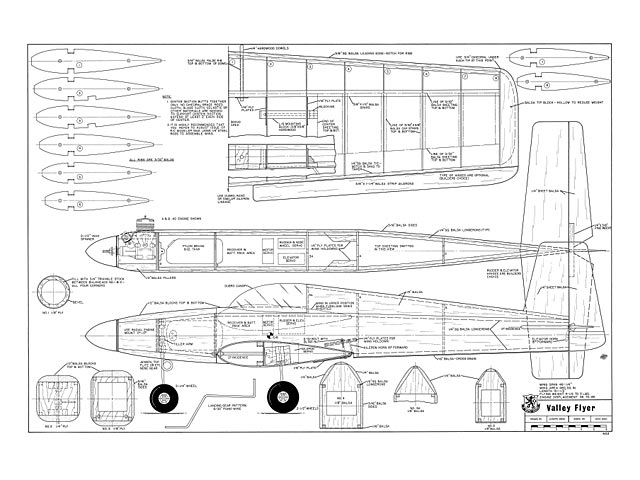 Quote: "Designed on assignment by a team of nationally known fliers, the Valley Flyer is a .40 powered sport design that can be built as a low or shoulder wing, with conventional or tricycle gear.

To fully appreciate the Valley Flyer you should first realize that it is not the usual product of one mortal man. Rather, it is the product of a group of experts detailed to design and build an R/C model just for you, the RCM reader. Responsibility for the whole business must be credited to RCM's Contributing Editor, Dick Sonheim. When Dick was elected 1970 president of the San Fernando Valley Flyers R/C Club, he assigned a team of experts from the club to design an airplane for RCM. The driving philosophy was that the club was poor and could use the proceeds which Dick would choke out of Dewey for the article. Well, at any rate, that was the idea.

There is little argument that the club members Dick assigned to design and build this airplane were real honest-to-goodness experts. Larry Leonard, Bill Northrop, Joe Bridi, Don Butman, Bob Upton, and Earl Harting, and the Stockwell crew were just a few of the talented modelers that Dick assigned to the team. But of course every organization must have a problem child. That's where I come in. Dick assigned me to act as glorious leader and get the whole gang of experts headed in the same direction. Furthermore, Dick put absolutely no stipulations or restraints on the job. Great!

So off to work we went. And when you get a group of knowledgeable people together and all have a common objective, things really move fast and decisive action can be taken. During our first work session it took only five hours and 32 cans of beer for all those super-duper experts to come to one universal agreement. Each and every one agreed, without exception, that he liked girls. There was no further agreement. One expert wanted a pattern ship, another a Formula I racer, another a scale job, and so forth. Then of course there was 'Wild Bill' Northrop who was having Big John Biplane fantasies and hallucinations throughout the entire first meeting.

All I can say is thank goodness for Earl Harting who finally came up with the design concept which the experts, who had gathered together for that first meeting, ultimately merged into the Valley Flyer. Earl proposed that the design be a sport type model which could be built as either a low-winger or high-winger and as either a tail dragger or a trike gear job. A few sketches proved the whole business could be achieved with one set of parts and a little ingenuity.

The Harding design proposal was soon agreed upon. Thereafter, it was unanimously decided that the ship should look like a real airplane, be small enough to transport assembled, and be designed around the new K & B .40 sport engine which was soon to be available.

Finally a lot of hard work and thought by a talented group of people bore fruit and the Valley Flyer model was born in the two shapes shown here. Both have been flown by a long list of both experts and beginners who have been favorably impressed.

The ship is not a beginner's flight trainer. On the other hand, it is not tricky. For one thing the thick Bridi Sun Fli type airfoil section gives either version of the Valley Flyer a very docile stall. Slow flight characteristics are particularly evident in the shoulder wing version where the prop wash wets a lot of highly curved wing section and provides a respectable amount of lift at low air speeds.

While on the subject of flying, even Jim Kirkland would have a ball with either version of the Valley Flyer. Both designs are very nimble and very quick. For those flyers who have the knack of doing knife edge flight, powerful rudders and large side areas permits knife edge from horizon to horizon.

Like to try and build a Valley Flyer? The construction is so straightforward that little need be said. Select the version you like before or after cutting the parts. About the only difference is that the location of the stabilizer slot must be reversed when going from one version to the other..."

Update 10/06/2018: Replaced this plan with a clearer copy scanned from fullsize, thanks to dfritzke. 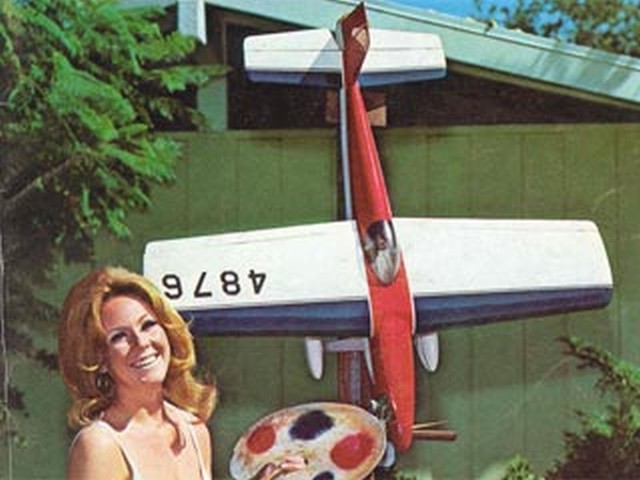