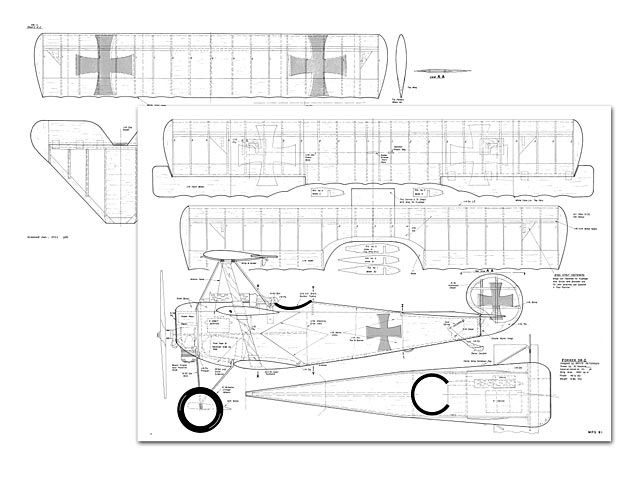 Quote: "Holy Cow, it has three wings, the French airman thought to himself as he approached the funny looking airplane. Is this the new German fighter we've been hearing about ? He must be slower than I am because I am gaining on him fast. Yep, there are the black crosses and he is running for his life. The Frenchman grinned as he closed the gap for a sure kill at close range.

Squinting through his gunsights he started to squeeze the firing mechanism, when much to his amazement, there was nothing there. Where did that blasted German go? He was there a second ago. Suddenly, his grin turned to fear as he saw the tracers tearing apart his top wing. His neck twisted as he searched the sky for the other German that must have been waiting behind him. There it was - the nqw Fokker DR-I Triplane sitting right on his tail.

That buzzard wasn't running from me at all; he was just waiting for me. No doubt the German Ace scored another victory that day. He was using the new weapon the way it was designed to be used. Teamed with a skilled pilot and marksman, the DR-I became an unbeatable combination. Baron Von Richtoffen favored the DR-I and a specially built machine with added bracing made him the Ace of Aces in the sky over Germany. It is said that only overconfidence was his downfall, and he was quoted as saying, If I can get above and behind the enemy, he doesn't have a chance. Strangely enough, Roy Brown in his Camel got above and behind Richtoffen while the Baron was preparing his 81st victory. He never knew the enemy was behind him as the machine gun bullets climbed up the rear of his fuselage to the cockpit. It has been said that perhaps a ghost landed that little red Triplane in No Man's Land that day behind the enemy lines. I believe the superior maneuverability of the Triplane created the overconfidence that became the end of the Red Knight of Germany.

CONSTRUCTION NOTES: Keep in mind during construction that from the center of gravity forward anything goes. Use hard balsa and hardwood and plenty of epoxy. Brace everything doubly well. On the same note, everything from the C.G. back must be built with lightness in mind. Choose soft balsa and brace only where necessary. If possible, use the Williams plastic 5 vintage wheels. They are molded from heavy plastic and figure into the balance plan.

Before bending your 1/8 dia piano wire, prepare pre-bent jigs from coat-hanger wire. This will enable you to bend accurately for that all important wing alignment.

When securing the wing bracing to the nose block, wrap one thickness of Saran Wrap around the buried area. This will break the bond and give the hinge action for removing the center wing.

Fuselage: Prepare the side panels using epoxy on a flat surface. Rough cut the nose block and bond the firewall and sides in position using hardwood triangular bracing. This gives you a solid framework to work from and the rest of the construction is fast and straightforward.

Select an extra stiff spring for the tailskid. A great deal of pressure is exerted against it.

The 1/16 planking on the sides should be glued heavily in the rear position because they are sanded to a point. The tailskid should be installed before the bottom is covered. Rudder: Cut the outline from 1/16 plywood and prepare according to the plan, Be sure to use epoxy around the hinge area.

Wings: Pin the 1/4 x 3/4 in straight spars to the plan. I recommend that the ribs be cut from an accurate jig for uniformity. Cutting them separately adds difficulties in wing alignment.

Place the ribs on the spar and then glue the leading edge in place, and then the ribs are glued. This gives you a box framework and planking is easy and accurate.

Tip Struts: Bend the aluminum holders around the sanded balsa struts. Fasten the wings to the fuselage and check alignment. Place the struts and aluminum holders in proper position, just touching the main spar on all three wings. Epoxy in place with balsa scrap for shimming where necessary. Your wings are now ready for covering.

Finish: Auto body filler was used to fill the wood before painting/. Do not use a bright red, but a dark red. I obtained this by adding a small amount of talcum to Aero-Gloss FOKKER RED. This will give you a slightly dull finish for scale appearance.

Cowling: A machine-turned finish was used on the custom DR-I. This was done by first applying three heavy coats of silver dope to the cowling and left to dry overnight. A Dremmel flexible cable and a circular brush was dipped in silver dope and applied with a dribbling motion straight on and off. A thick buildup in a circular pattern will dry out with an attractive machined appearance.

Machine Guns: No doubt, this is the focal point of your airplane. Extra care will pay off in apopearance here. First, I prepared a photographic negative of the cooling holes in the barrel.

Brass shim stock was coated with KPR (Kodak Photo Resist) on both sides. Exposing through the negative produced etched holes in the shim stock. This was rolled on wood dowels and soldered to form a cylinder. The rest of the guns were cut from hard balsa and epoxied in place. They are finished in dull black.

FLYING: This is no beginner's airplane and should be tested by an experienced pilot (Just like the real one). Follow these rules and you should not have any trouble.

1. Always take off into the wind, even if it is across the runway.
2. Allow a fast groundspeed before takeoff. While on the ground, if the airplane yaws to the right or left, chop the throttle and try it again. The rudder and ailerons have little value at slow speeds but become most effective at high speeds.
3. Expect a sharp yaw to the left on takeoff but not too severe (make a climbing turn for altitude). Once your flying speed has picked up, it should trim out groovey.

Smoother trim can be achieved by adding about 3° right thrust in the engine.

Go ahead, throw caution to the wind and build the Triplane. Your friends will think you are crazy, and they are probably right, but that helps." 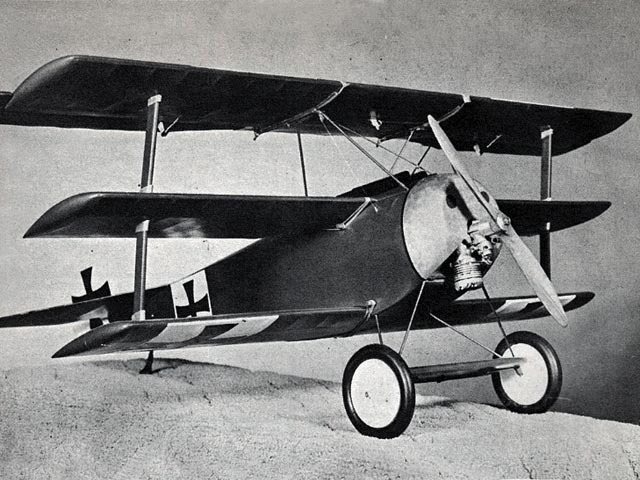