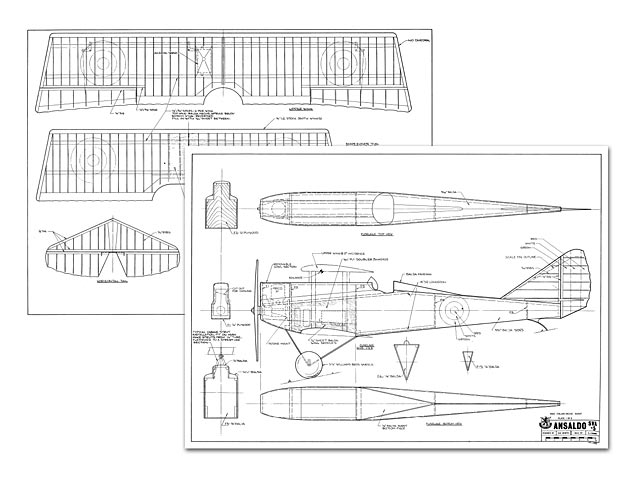 Quote: "The Italian Ansaldo, first flown in 1917, was designed as a light scout bomber and reconaissance aircraft. Its speed kept it away from most interceptors, while its maneuverability gave it an even chance in a dogfight, This .60 powered scale model faithfully follows the prototype - in both appearance and performance. Ansaldo SVA-5 by Gus Morfis.

We are all familiar with the 'best' pursuits planes of WWI, the Camel, the SE5, the Fokker D-7, and the SPAD 13. But nobody remembers the Ansaldo SVA-5. The Italian Ansaldo was certainly no 'second best' performer and if its theater of operations had been as well publicized as the Western Front was, the Italian Scout would be better known today.

First flown in March 1917, the Ansaldo was designed with speed and range as its prominent features. Its maximum speed was 143 mph, time to climb to 13,500 feet was 10 minutes, and non-stop flights of 900 miles distance were flown in proving out its range capabilities - no second best performance, especially in 1917! The airplane was developed as a light scout bomber and reconnaissance aircraft, duties which would take advantage of its unique performance capability. Its speed would keep it away from most interceptors and its manuverability would give it a fair chance against any which trapped it into a fight. The Ansaldo was apparently a very reliable machine, its six cylinder SPA-6A engine hauling it on many a long range mission over the Adriatic Sea and over enemy territory.

My buddy, Earl L'Homme, was looking for something to enter in an upcoming WWI meet. From all the scuttlebut around it seemed like everyone was planning a SE-5 or a Fokker D-7. Both are excellent choices for models, but why pick out the same thing that everyone else would be entering? The trick was to choose a prototype which would be sufficiently different from the crowd to catch the judge's eye and still not be a freak.

CG location and balance was another problem. Most WWI airplanes have such short noses that it is very difficult to balance them properly without having to virtually fill the cowling with lead. Because of this, short nosed airplanes like the Sopwith Camel and the Fokker D-8 were rejected. There really wasn't much left to choose from and when we studied the vertical radiator design of the SVA it seemed like a natural place to bury the engine. And so the choice was made! We would try a model of the Ansaldo SVA-5.

Our model is made to 1-1/2 in = 1 ft scale which produces a 45 inch wingspan. The cowling line is just perfect for a Merco .61 at this scale except that at the very front the radiator must be widened out a bit to clear the cylinder. This is not too objectionable especially since the widened nose shape lets you completely bury the engine. We realize that a .61 sized engine is a bit larger than you expect to see in a model this small, but consider the situation:

(1) Bi-planes, especially WWI bi-planes are quite draggy, so top speed won't be too bad.
(2) We were ioing to require nose ballast anyway - so why not get some work out of the ballast?
(3) Just because the power is there, we don't have to fly full bore all the time, do we?
(4) We could take advantage of the engine and put a large diameter, flat pitch prop on our model which would look more to scale, and
(5) we had a Merco .61!

The combination worked out well. What is most important, however, is that this model has been the most amazing flyer we have seen in a long time. Control response is instantaneous, both going in and coming out of a maneuver. At full throttle this Ansaldo will go faster than you think and will hold its own in an impromptu pylon race. It might give a little on the straightaway, but boy does it make it up in the turns! The ailerons are extremely powerful and this model rolls fast, tight, and true. Spins are a true delight, very fast and the pullout is very clean. There is enough power to make a large circular loop if you want to, or you can really haul it over on its back in a combat situation. In addition, we have noticed no ground loop tendencies, quite unusual in a WWI type model.

I definitely feel that the Ansaldo SVA-5 will delight you with its flight characteristics and will put you into the WWI flying scale picture with a vengeance. The Ansaldo is well written up in the Profile Publications No. 61 and I strongly urge getting this particular Profile if you plan to model the Ansaldo..." 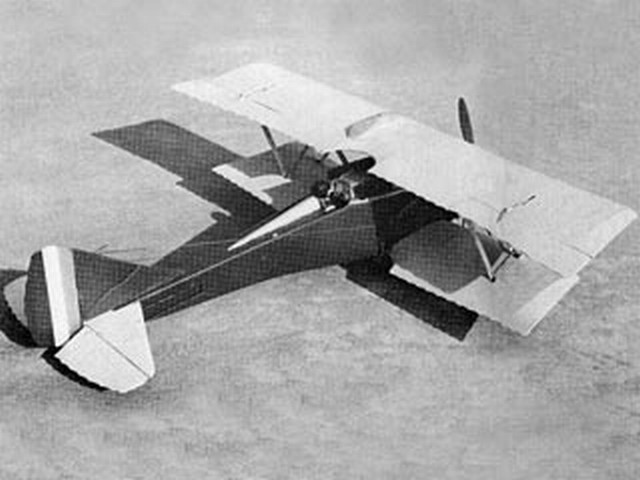