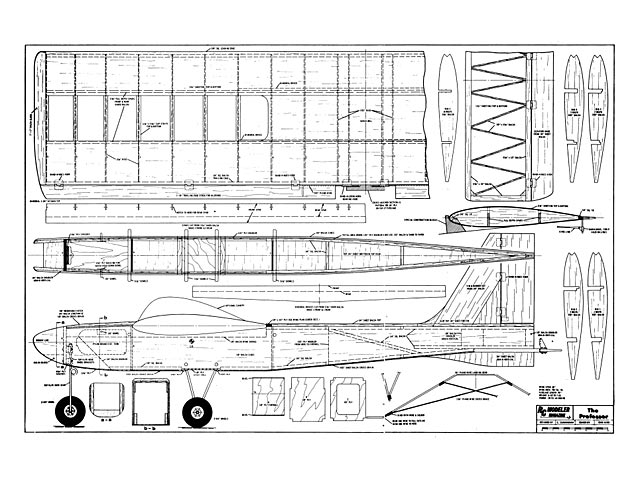 The Professor has been designed to satisfy the need of the newcomer to R/C who wishes to start with a large engine and a large model aircraft. This ship will take engines in the .45 to .61 range, and has been flown with a Ueda A5, a Fox .59, an Enya .60 and a Webra .61. It is docile at almost any power range. It has been flown both on proportional and 10 channel reed gear and has much the same flying characteristics with either type control. It is not the greatest airplane in the world - it wasn't designed to be nor is it the best possible pattern ship. It is a strong, smooth flying, rugged aircraft to get the beginner into the air and down again without making toothpicks out of wing spars. It will hold its own in a Sport Flying contest and will fly a pretty good pattern, and land either fast or slow. The wing is of a convenient span to fit into most automobile trunks and yet due to the low aspect ratio (the relation between the wing span and the wing chord is 'aspect ratio') packs a lot of wing area into a small span.

Those of you who have been following RCM for several years will recognize the direct connection between the Instructor (oz6566) from the RCM Annual of 1966, the Lil Swinger (oz5147) from RCM, October '67, and the Professor. This has been intentional since each of these ships was designed to do the same thing, only do it with differing engine sizes and radio equipment. If you have built one of the earlier ships and liked it, then I know you will like the Professor.

If this is to be your first entry into radio flying, then again I know that you will like the Professor. You needn't worry about skimping on the finish to save weight, although you are better off with a lighter aircraft. If you want to beef it up even more than the plans show, go ahead, the extra wood and glue won't hurt it. The idea is that this is one ship that you can build and not really worry about all of the time.

The original Professor has foam wings with balsa sheet covering. The plans show conventional balsa construction since this is the way that the majority of builders construct wings. Either method will be fine. I like to build foam wings since they are so much faster than built up ones, and if you cover with some of the new skin ma-terials such as Marvelite, sheet plastic, or my favorite, cardboard, you can complete a wing in a remarkably short time. Next month we will go into the problem of flying your first (or perhaps your third, fourth, or even fifth) R/C ship and will pay special attention to taking off, making simple turns, and landing. This month will give you time to get your Professor ready for the air.

Construction: It seems most natural to start construction by building the wing. (If you want a foam wing, and do not cut your own, one of the commercial wing cutters will be happy to furnish you with this type wing.) Cut out all of the wing ribs from either 1/16 or 3/32 in sheet balsa. I normally use the 1/16 since this is strong enough and much less expensive. Make a template from either cardboard or bard balsa from the master rib shown on the plan, trace around this template with a ball point pen on the sheet balsa, and then cut these ribs out with an X-Acto knife. After all of the ribs are cut out, stack them together, line them up care-fully from leading edge to trailing edge, and pin all of the ribs into one neat bundle. Sand this bundle to exact rib outline with medium fine sandpaper. This will in-sure that all of the ribs are the same air-foil, and that your wing will not have high and low spots..."

Update 18/09/2016: Replaced this plan with a clearer copy thanks to davidterrell80, Circlip. 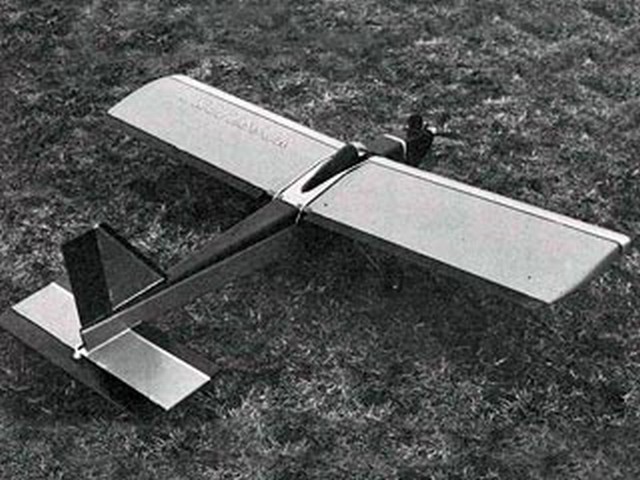