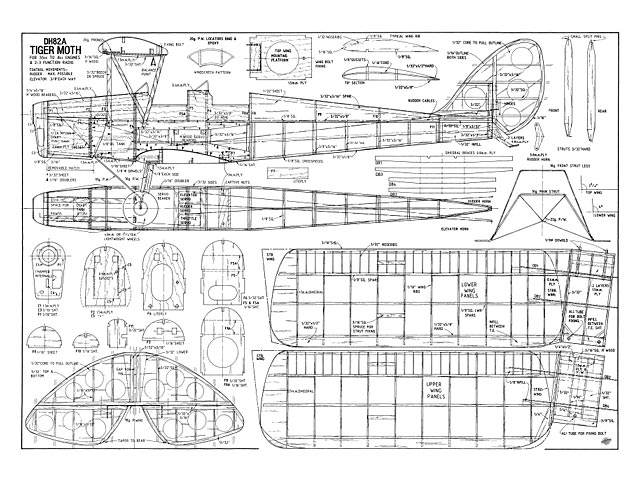 Note this plan appeared along with the DH.60 Moth (oz7952) in the same article, so the text describes both models.

Quote: "This pair of Moths owes quite a lot to the 20 size Cirrus Moth and Tiger Moth I designed and published in RCME in December 1985 and 86 respectively. Similar construction has been employed bet greater efforts have been made to keep the overall weights down, this being more important with the models if you wish to try your luck at flying them indoors ...the good news is that at 23oz the 'Tiggie' flies wery well. My Gipsy Moth came out at a tweak over 16oz, but I used micro servos, a 100MAh battery and a Micron receiver. Andy used the heavier mini gear."

Quote: "Andy Ward builds the Tiger Moth. The De Havilland DH82A Tiger Moth needs no introduction from me, save that it first flew in the early 1930s and many examples are still flown all around the world today. Tigers will still be flying well into the next century with more being restored to airworthiness each year.

There cannot be many modellers who have not built or flown a model Tiger Moth sometime in their career. There are certainly many kits and plans on the market to choose from, ranging from rubber powered free flight to 1/3rd scale radio control!

This is my third R/C Tiger. I once built a model from the Free Plan in RCME Dec '86. fitted ailerons and a 26 Surpass engine and had many a happy hour flying it. Personally speaking, the Tiger comes a close second in my 'favourite biplane' category to the American Curtiss 'Jenny' - but that is another story!

This three channel model measures 33 in from tip to tip and was designed by David Boddington in order to fulfill the criteria for
indoor flight at the Model Engineering Exhibition - namely a maximum throttled engine size of 0.55, hence the PAW55 in the model. At the time of starting to build the model. I didn't have an engine to power it. This situation was kindly resolved by my local model shop proprietor - more of this later.

Obviously. the small size of the model dictates that construction must be light and accurate with no twisted wings or banana shaped fuselages. for these would have a dire effect on the flight of a small model. To this end, the model has been designed with lightness in mind, using a built up rear fuselage and tailsurfaces.

Fuselage: Construction begins with cutting out a kit of parts in the normal fashion. Having built two identical fuselage sides over the plan and fitted the doublers and centre section struts, these can be joined by formers F2.4,6 and 8. The fuselage at these positions is parallel in plan view so it is easy to produce a square assembly

The rear sternpost is then pulled together and all the rear crosspieces installed. It is then a simple matter to erect the top decking formers and wrap with 0.4mm plywood at the front and dampened 1/32 balsawood at the rear. The latter is moistened to prevent splitting.

The cowl is interesting in that the lower portion is removable between F2 and the nose block. Again, accuracy of construction pays off here. but it is not difficult and I hope the photographs will explain all. The wing retaining plates, servo bearers and 1.5mm ply top wing plate are fitted to just about complete the fuselage. I added a 0.8mm ply floor in the rear cockpit to house my radio switch and pilot figure... " 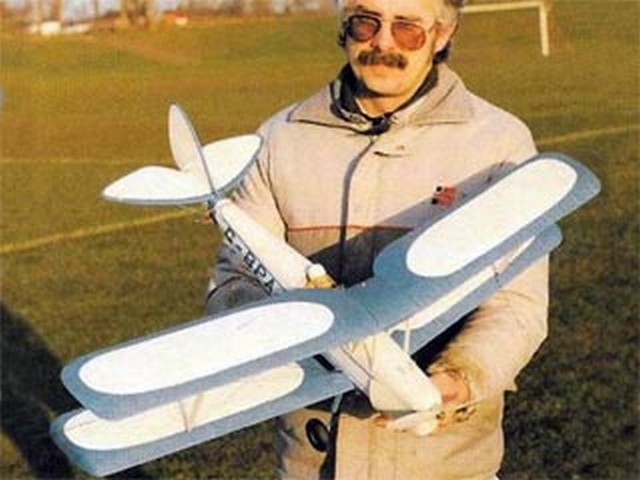