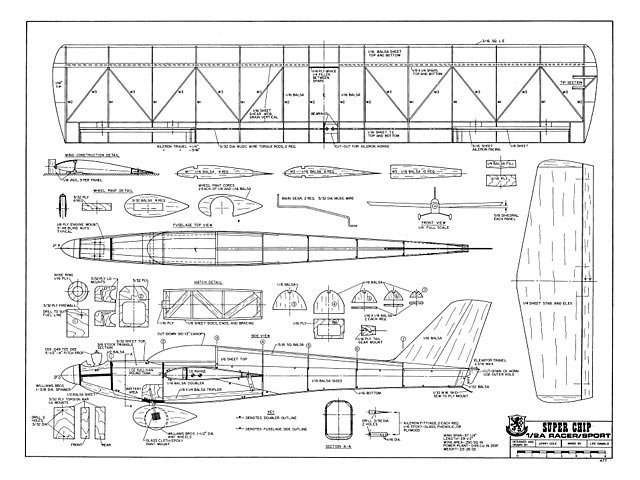 Super Chip was designed to be a highly competitive 1/2 A class pylon racer; an excellent sport-pattern performer; and capable of glider-like performance after the race is over. As an added bonus, it is also somewhat scale, in that it was patterned after a full size pylon racer. Like most small aircraft, it can be constructed, complete with everything except the radio, for considerably less than the cost of an R/C engine used in more common larger designs. Construction is straightforward, and the resultant aircraft is strong enough to be considered a good trainer.

Does this all seem too good to be true? Must it defy the laws of aeronautics? No, it is the result of defying the traditional concept that a bigger airplane with a more powerful engine generates a more desirable aircraft, and therefore more flying fun.

This design, like many of the new breed of 1/2A powered racing and sport aircraft, combine small, light-weight airframes, high performance engines, and one of the new sub-miniature digital. radio systems. The aircraft that results is considerably different from the rudder-only training and sport aircraft that were so common in this size range in the past decade. Most of this difference is due to state-of-the-art improvements in digital proportional systems, especially the new 2 and 3 channel radios with the receiver and two servos in one crash-resistant package.

If you're just beginning in R/C and you're looking for something more than just a rudder-elevator trainer, Super Chip would be a good step up. It is capable of exciting performance without the expense of larger aircraft and engines. For you experts, there is enough competition potential this new small racing class to satisfy the most proficient flyer. This particular .design can put you right up there in the winners circle. When not racing, Super Chip makes an excellent sport pattern ship for that little flying field close to home. As for me, I just think she is a cute little ship, and fun to fly.

Super Chip was designed after a full season of experience flying in 1/2 A races sponsored by the Aeroguidance Society, Inc. I raced a kit Junior Falcon (oz8144) modified to resemble the shoulder wing Miss Cosmic Wind. Flying with rudder and elevator control, it was a satisfactory racer: I felt that its aerobatic potential, however, was limited.

The new design had to retain the scale-like appearance of the Miss Cosmic Wind, but must have ailerons for smoother aerobatics, a much stronger but lighter wing, better longitudinal weight distribution, and be as aerodynamically clean as practical. A search for a full size shoulder wing racer with a constant chord wing turned up many cassutt versions, the Bonzo, the Buster, and other often modeled designs. While looking through 'Racing Planes Guide' by Joe Christy, I spotted a photo of Ned Kensinger's Tater Chip design. Raced by Jim Rice at Fort Wayne in 1956, this design met all the requirements. Another good photo was found, and off to the old' drawing board. The rudder shape was altered to move the center of vertical area rearward, but the modified design still had the sleek lines of old number 88. Because of the more modernistic tail shape, I named the new racer Super chip.

A one-piece shoulder wing design, utilizing a belly hatch for access to the radio gear, had been used with considerable success on the earlier Miss Cosmic Wind, and these features were retained on the Super Chip. This one-piece design makes perfect alignment much easier,, promotes a rugged but lightweight structure, and really protects the radio in event of a mishap. The Miss Cosmic Wind is still racing after hitting two wood pylon poles and. a snow fence, so the latter feature was a little over-tested! Also, aileron linkages are somewhat easier to design and install if the wing and fuselage stay together. When using the two channel brick-type radio systems, this becomes even more important. To eliminate the lack of torsional rigidity common in wings of smaller aircraft, diagonal ribs were used in conjunction with fore-and-aft closed D-tube sections. Sufficient space was made available between the D-tubes to mount most radio gear, thereby providing maximum survivability for these expensive components.

Drag reduction was enhanced by keeping all control horns and linkage inside the slipstream, incorporating a spinner, and by extensive use of fillets around the wing, canopy, and tail surfaces. Narrow wheel pants were used for good looks and drag re-duction on the removable torsion-bar landing gear, and have yet to cause a nose-over in the thick grass of local flying fields. If in doubt about the wheel pants, build an extra set.- -of landing gear without pants for practice flying..." 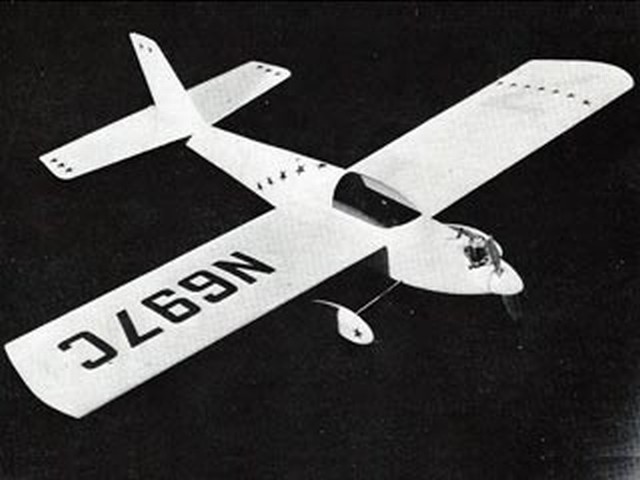