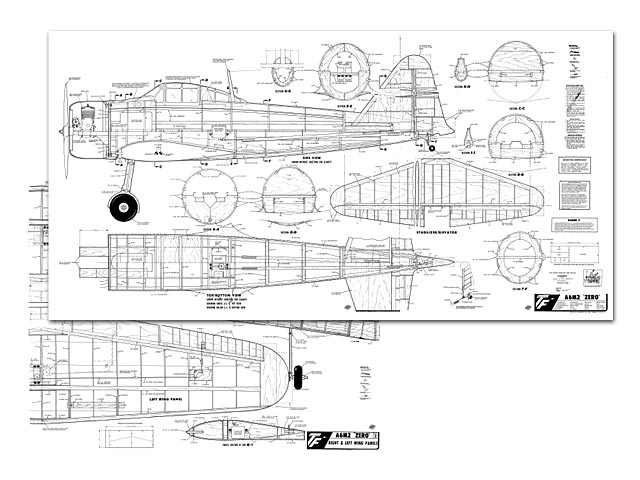 The Top Flite A6M2 Zero comes well-packed in a red box measuring 42 x 10-1/2 x 4-3/4 in. On the box top is a picture of Hal Parenti's prototype that will show you what can be done, with a lot of work, during the finishing process. This kit was engineered by Top Flite to expand their scale line with another World War II model that would exhibit good flight performance and, at the same time, allow the modeler the flexibility to build the model to compete in a contest, or fly it on Sundays. This kit was well-packaged with all small wood pieces and hardware bagged. The canopy was well-packed in tissue paper and all sheet wood was bundled with paper wraps. No damage was noted when we unpacked the kit. The hardware package was average for a kit in this price range.

Construction: Three plan sheets, two measuring 35 x 44 in and one measuring 35 x 26 in, come neatly folded. The two sheets for the fuselage must be taped together before construction begins. The plans are well-drawn and easy to follow in most major areas. The instructions are in a six page book with many informative drawings. The instructions could be expanded in some areas but will not cause the experienced builder any major problems. The new scale builder will have to use the fit and try method, using the plans and instructions as a guide.

The quality of parts was rated as an overall excellent. The die-cutting was crisp and only a very light sanding was required. The parts match to the plans was good except for the main fuselage crutches. The slots that are cut to locate the cross braces and bulkheads do not match the plan location. We went with the pre-cut wood but were not sure which one was correct. (Editor's Note: Top Flite was notified of this error and plans were corrected.) The balsa provided to sheet the fuselage and wing varied in hardness and thickness from one end of the sheet to the other. We used most of it but did substitute a few pieces for our own satisfaction.

Fuselage: The fuselage is constructed over the plans using the pre-cut main longerons to locate the cross braces and upper bulkheads. The 3/16 x 3/8 longerons and 1/8 balsa sheet completes the upper fuselage half. The wing saddle is formed, using 1/8 balsa die-cut formers, and then glued to the bottom of the fuselage half that was just completed. The plan shows a full depth cockpit which causes part of the radio installation to be well-aft of the CG location. We changed the depth of the cockpit to allow the radio package to be located as far forward as possible. After the wing saddle assembly and the lower bulkheads have been glued to the fuselage, the majority of the fuselage bottom can be sheeted using 1/8 balsa sheet.

At this point we cut a hole in the firewall, below the engine mount rails, and installed a tube so we could mount the battery as far forward as possible to preclude adding any more ballast than necessary. The plans, as drawn, show 8-32 nylon bolts used for the wing hold-down. We changed ours to 1/4-20 and used a 1/4 ply plate to tie both of the fuselage blocks together. The fuselage is not difficult to build if the plans and instructions are followed during construction. All major construction was completed using Goldberg Super Jet except for the engine mount rails, which were installed with Devcon 5-Minute Epoxy.

Wing: The wing is easy to construct directly over the plans. All wing ribs have alignment tabs that help to ensure a warp-free wing. The basic wing structure is built using balsa ribs, 1/4 x 1/2 in balsa spars, 7/16 tapered balsa leading and trailing edges, and ply dihedral braces. The wing is sheeted with 3/32 balsa after both panels are joined using the center section ribs and ply dihedral braces. We used Goldberg Super Jet for all construction, except for the landing gear blocks, which were installed using Devcon 5-Minute Epoxy. The wing is not difficult to build on any flat surface, but the use of an A-Justo-Jig will make the installation of retracts much easier. There will be enough room to install most brands of retractable gear. The type we tried, Sonic, did not lend themselves well to this wing plan form. Rhom Air, Spring Air, Robart, or Royal, should work well but pay close attention to the wire size of the gear legs (3/16 music wire should be the minimum size used). If you decide on fixed gear, the pre-formed wire landing gear will have to be bent to move the axles forward 3/4 in which will improve the overall ground handling. The wing tip blocks are large and require a lot of sanding and carving to get the proper shape on both tips. After sanding the wing, the flight controls can be sanded to shape, hinge slots cut, and total travels set.

The tail group will build fast and light directly over the plans using Goldberg Super Jet. The leading edge stock provided in the kit was not the size as indicated on the plans and instructions for both stabs, and the pre-shaped stock for the leading edges of the elevators was missing. A note to Top Flite rectified the problem. Other than these minor setbacks, the stabs and control surfaces were easy to build. This plan does not have a tail wheel steering drawn, and the hardware package does not provide any hardware other than a free castering tail wheel bracket. We formed 1/8 music wire to function as a rudder torque rod which provided tail wheel steering.

At this time we joined both stabs to the fuselage using the wing to ensure alignment. The fillets around the vertical fin are formed from large balsa blocks. The information provided regarding the size, location, and shape of these fillets is not adequate. We used the information in Profile Publications, Volume #6, to help. Be careful in your choice of adhesives because of the distance from the C.G. We used Goldberg Super Jet for all glue joints to save time and weight.

Covering: The complete fuselage and wing was sanded with 220 grit prior to the application of the K & B 3/4 ounce glass and K & B resin. We sanded the fuselage and wing again with 220 grit, and then sprayed two coats of acrylic lacquer primer with Dave Brown's Flex-All added. While that was drying, we covered the flight controls with Coverite Silkspun and sprayed them with primer. Since the bottom of the Zero was to be gray, we tinted the primer to the color we wanted. The green and yellow acrylic lacquer was sprayed after the primer was sanded with 400 grit. The mylar decals provided gave the final touch and made the Zero look almost real. Profile Publications Volume #6, and the picture on the box, indicate that the numbers on the bottom of the wing are black but the mylar decals provided are yellow. After all the detail work was completed, we applied two coats of K & B flat clear to protect the finish.

Engine: We installed a new S-75 Super Tigre to power the Zero. The S-75 fits inside the cowl with room to spare. The exhaust system was completed using a Tatone muffler, homemade adapter and silicone exhaust tubing from Mac's Products, a Sullivan 12 ounce tank, Aero Trend fuel tubing, and a new pressurizer from Ed's Model Products completed the fuel system. The Super Tigre is still new, but set rich will turn a 13/6 Top Flite or Zinger prop with authority, has a very low idle speed and, in flight, burns a little over 1 ounce of fuel per minute. We chose a Du-Bro 2-3/4 in spinner for the Zero.

Radio: We used a new Futaba FP7FG with S-26 servos. This radio made it very easy to complete the installation using the dual rate and reverse switches. If you don't have a dual rate radio, check all control surface throws before completing the wing and fuselage. We set up our flight pack as far forward of the C.G. as possible and used Goldberg and Du-Bro hardware to complete the radio package. There is more than enough room in the fuselage and wing to install almost any brand radio with room to spare.

Flying: To set the C.G. at the forward limit (as shown on the plan set) required 16 ounces of ballast bolted to the engine mount rails. Flight control travels are not indicated on the plan so we took a guess and had to change the throws following the first flight. The final settings that gave us a good flight, without being sensitive, were ailerons 3/8 in up/down, elevators 1/2 in up/down, rudder 1-1/2 in left/right, and flaps 3/4 in total travel. The first flights went very smoothly with the only problems being a nose-over on every landing. Moving the axles forward 3/4 in gave us the opportunity to fly more than once on each prop. In flight, the Zero is not difficult to fly. Rolls, continuous loops, and inverted flight can be performed at partial throttle. The stall speed is very low and when the stall does occur it is very soft and straight ahead. The Top Flite Zero is forgiving enough to make you forget that it is a scale model of a World War II fighter.

Conclusion: Once we saw the Zero fly we almost forgot about the problems during the building phase of the project. On the ground or in the air it looks like a real fighter. This kit has the potential to be a winner on the local contest circuit if you do your homework and complete the documentation before building it. There are many sources of information available. We used Profile Publication's Volume #6, #8 and #12 as well as 'The Fighter' by Batchelor and Cooper. This kit could be built to conform to any version of the Zero, from A6M2 to A6M8, with only minor cosmetic changes. This project is not for the beginning builder or flier. Some experience with a faster low wing sport flier would provide the experience necessary to ensure a measure of success. If you would like to build and fly a scale model that offers excellent flight performance, the Top Flite Zero could be just the ticket." 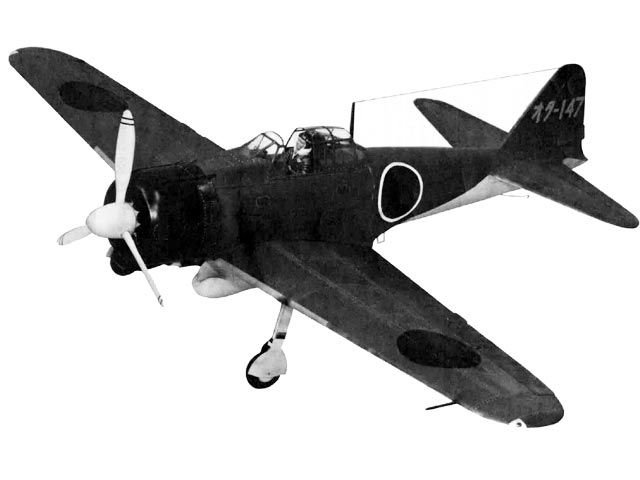