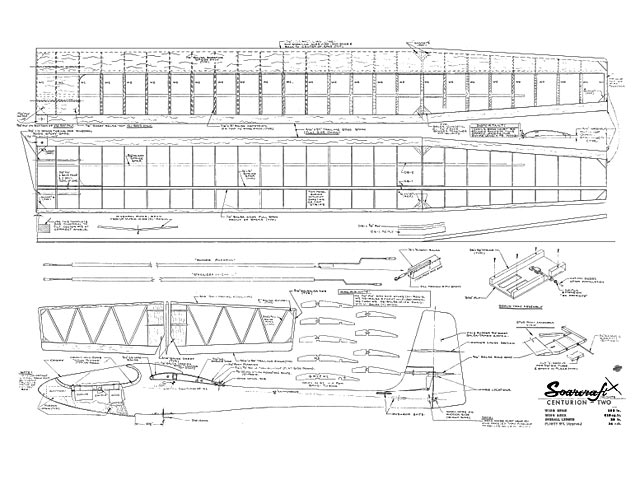 Centurion Two. Radio control sailplane. 100in wingspan, 618 sq in wing area. This kit used a prefabricated plastic fuselage, so no formers are shown for the fuse.

For the Centurion Two as it appeared in 1974 RCM, see Centurion II (oz10952). This here is the design as it was kitted by Soarcraft.

Quote: "While we have previously stated that the Centurion II was basically conceived as an R/C Sailplane Trainer, the prototypes which have been used for testing purposes, have racked up many impressive contest trophies. It is recommended that if the Centurion II is to be used as a trainer the control surface responses he minimized to prevent over-reaction.

The light weight characteristics of the plastic used definitely fall within the weight specifications of the Centurion I even though the wing has been extended to 100 in. The Centurion II excells as a contest ship due to its light wing loading thus making it very responsive to light thermal lift. Its ability to turn on a dime and give four cents change makes it excellent for centering in small thermals. Pre-production tests of the Centurion II on slopes with winds of up to 30 mph have demonstrated its exceptional penetration and broad forward speed envelope. It can be flown quite slowly to catch ihermals and quite rapidly when it is necessary to cover distance to find new thermal activity.

CONSTRUCTION: In accordance with the design basis on the R/C Sailplane Trainer, the construction of the wing surfaces has been greatly simplified to provide for minimum building time and effort. It has been found that without really extending ones self, the modeler can sacrifice one weekend of flying and completely construct the Centurion II and therefore gain many hours and weekends of future flying pleasure.

Quote: "Hey Steve, I was bumbling around the site and came across the Centurion II and saw that it was missing the instructions. Well I just happen to have them and the 1974 RCM article also. Since you and the folks that have been so kind to share so much I figured I would join in, so attached are the two items mentioned . . . ;>). Joe"

Note the Soarcraft manual contains much text that does not appear in the RCM article, including notes on trimming, flying, thermalling and landing the model. 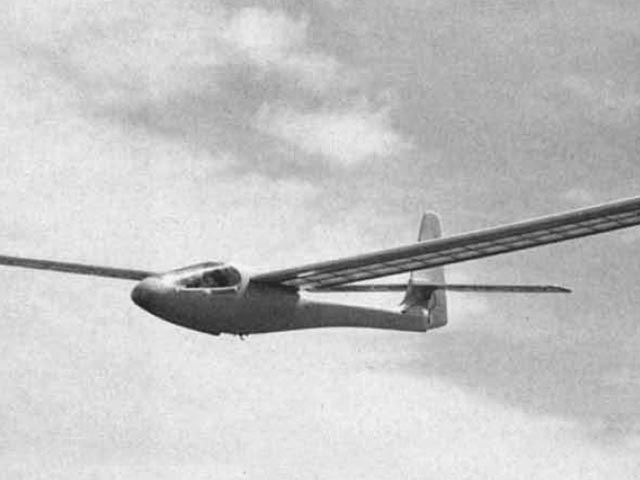 Hello, does anyone across the pond have one of these kits? I had to give my Centurion up many years ago and would dearly love to build and fly one again. Willing to pay reasonable price and shipping to USA. Thank you very much. From Mount Vernon WA,
Jerry Giles - 28/11/2021
Add a comment