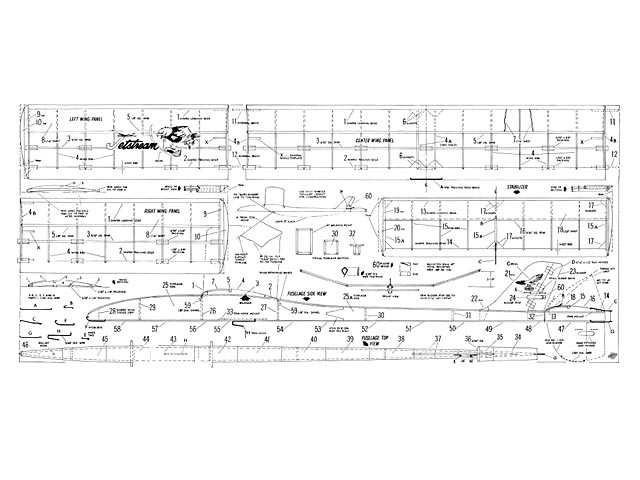 Note the Jetstream design was first published in AM Nov 1960 - see supplement article file. This here is the plan of the Jetstream as kitted by Ambroid.

Update 16/08/2016: added supplementary file, thanks to alcalaino. "The plan (not to scale) with building info appeared in the Argentinian magazine Lupin, in its no.208 issue of January 1983, and is a plain copy of the Jeststream from Ambroid. It has an interesting feature anyway: the sketches showing the way that the rudder and dethermalizer work in free flight gliders. The page is a materials list from a latter issue of the same magazine."

Now and again there appears on the model scene a design that looks every inch a contest winner - such as Gold-berg's immortal Zipper (oz387), Hansen's '53 Nordic Winner (oz2468) or King's '54 Wakefield winner (oz10194). Sometimes they sport slinky Bardot curves; sometimes no-nonsense lines like a Volkswagen. But almost without exception the world's top contest craft seem to share an unmistakeable functional beauty. Such a model is Warren Kurth's 1960 and 1959 Nats-Winning and AMA Record-Holding A-1 towline glider - one of the finest examples of towline design to ride the thermals for many a season.

Warren's 'Jetstream' is simple and rugged. Its proportions were developed after careful study of dozens of top glider designs - plus extensive flight testing and contest experience. The original model was built early in '59, taking 4th in the first contest entered (combined A-1 and A-2 event at Cedar Rapids, Iowa) and 1st in its second contest (combined A-1 and A-2 at Chicago Mid-western Championships). It is particu-larly easy for a beginner to adjust and fly.

Originally dubbed 'Spike' (3-view appeared in May 1960 AM), the new name came about following the suggestion that a less vulnerable upper fin be substituted, forward of the stab. The subsequent Mark Two version with the jet-age swept fin is reported to give slightly better flight characteristics. It won with 11 minutes, 26 seconds at this year's Dallas Nats. The plans give both types, you take your pick! The plans show cut-out parts arranged on 3 x 36 inch balsa sheets. Parts are numbered in correct building sequence; you'll sidestep snags and finish in the shortest possible time if you follow this procedure.

Pick out firm (but not heavy) balsa stock. Sand off any fuzz before marking patterns on to the sheet balsa (with carbon paper or by pinpricks). Warren's original models have no rear wing spar - this is added on the magazine plans as a safety factor for the average modeler. If you use the best wood and have already built a few lightweight gliders, the rear spar may be omitted (but then remember not to cut the rear spar notches in the ribs). It's important that wing tips and tailsurfaces be light so quick recoveries occur from stalls or rough air disturbance. Leading edge sheet for flying surfaces should bend easily to follow airfoil curves.

Rub over your working drawings with a bar of soap at all rib/LE and rib/TE joints to prevent parts from sticking to plans. Wax paper over plans isn't such a good idea since it retards cement drying.

Next, attach top wing leading edge sheeting (7 and 8) - first cementing to leading edges and front 1/8 of each-1 rib. When dry, cement sheeting to remaining portion of each rib and to main spars. Give sheeting joints an extra coat of cement, except at leading edge/sheeting seams and spar/sheeting seams (which could pull sheeting down and out of shape). Add wing tip pieces (9 and 10); carve them to shape when dry.

Carefully sand the three wing panels; check for weak or broken joints. Clear dope and lightly sand with #400 paper, at leading edges, trailing edges, wing tips and end (dihedral-break) ribs. Also dope undercambered lower rib edges (two coats). Now line up the three wing panels, pinning center panel to building board and packing up each tip panel 3-7/8 under the tip rib at front and rear. If facing ribs of the three panels do not fit flush, carefully sand them to correct this.

Give each facing rib two coats of cement and let dry before finally cementing panels together. When quite dry, cut away front and back ends of ribs, add dihedral braces (11 and 12). Give all dihedral break joints another coat of cement, then cement center section wire brace (A) to trailing edge... " 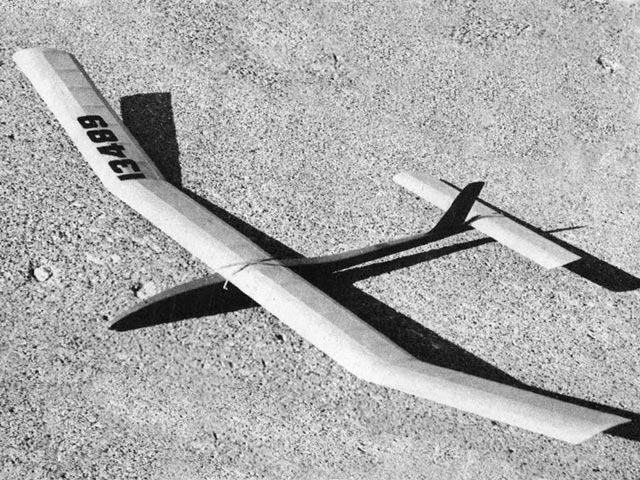