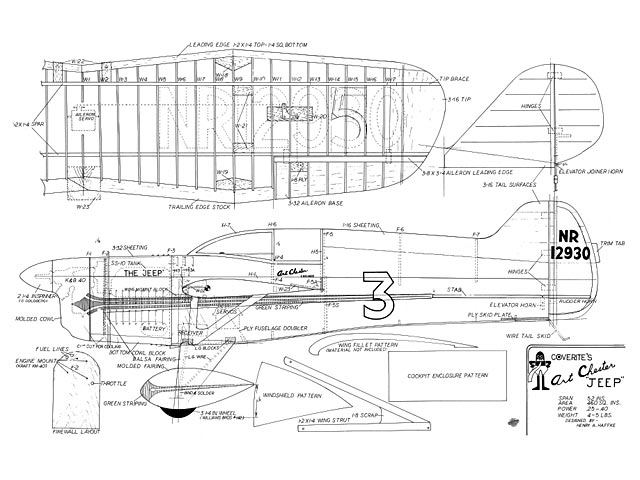 Note there are no ribs and formers shown on this plan, but see similar plan (also by Henry Haffke) at oz7002 which may help fill in the gaps.

By Doug Pratt.A classic from the Golden Era of Racers, the 'Jeep' is a pleasure to build, and a joy to fly on four-stroke power.

Henry Haffke is known as 'the Gee Bee man.' Born in Springfield, Massachusetts, the home of the Granville racing planes, he's spent a lot of time researching them. But he's come across lots of other interesting airplanes in the process. It's easy to understand why; in the late 20s and early 30s air racing was where the action was, and brilliant and eccentric people were showing the world some weird and wonderful machines.

I can't think of a better way to appreciate the era of the great racing planes than by building a model of one of them. One of the pleasures of the sport of aeromodeling is this sensation of touching history, of making it yours. Henry's kits give you a real feel for the aircraft you're building and the men behind it. It makes you feel like part of the story.

The kit itself is all you could wish, considerably superior to the previous Coverite kits. It's not for rank beginners, since the instructions are a bit muddy in spots. The wood is excellent, and the hardware pack-age is complete. Coverite has vastly improved the die-cutting; parts are cut very cleanly. Each part has its number clearly marked on it; a real time and frustration saver. Good die-cutting is important, since the wing shape will depend on where the holes are cut in the ribs. I didn't even have to sand any of the rib edges; that's precise.

You'll appreciate the parts organization in the kit. Sheet and stripwood are taped together in bundles, and there's a cloth 'goodie bag' of small stuff that's much more convenient than the usual stapled plastic bags.

WINGS: The wings are unusual, to put it politely. They have a strange shape no matter which way you look at them. They're straight on top, and at the bottom they widen from the fuselage to the point where the struts attach. Then they taper from the struts to the tips. To achieve this, you have to shape the spars so that the diecut ribs sit at the correct angles.

Begin with the rear spars. You mark the locations of the two end ribs and rib #9, which is the wide point of the wing. Then you mark 3/8-inch down from the top at the outer ribs, so the spar will be 3/8-inch thick at those points. A diagonal line is drawn from the ends of the spar to the center, and the wood under the line is trimmed and sanded away (a belt or disc sander helps). This gives you two spars shaped like very shallow V's. Finally, you taper the inboard ends of the spars to make it easier to join the wing panels to-gether. Be absolutely certain before you do this that you have the spars positioned correctly, so that they will join with the flat side to the top.

When you have the spars shaped, the ribs are slid on the rear spars. It's a good idea to sand the spars slightly to make this easier. Push the ribs onto the spars by holding your fingers against the rib on the front and back of the spar and pushing gently. Don't get upset if they break; just lay them flat on a piece of waxed paper and glue them back together. When all the ribs are on the front and back spars, sight along them to make sure that the panel is as straight as you can make it. Twisting gently at this point before the ribs are glued can help prevent wing warps later. If you have a warp that you just can't get out, twist the wing so that the aileron edge is twisted up so you have built-in washout.

You can save yourself quite a bit of trouble by stacking the ribs and drilling the holes for the aileron pushrods before as-sembling the wing. if by some chance you didn't think of this in time (like me), you can make yourself a handy little hole punch by sharpening the end of a piece of 1/4-inch brass tubing. Use a knife to remove material from inside one end until it's sharp. Notching it in a couple of places can help saw through dense parts. I recommend planking the leading edge of the wing rather than sheeting it. It's a lot easier to fit nice, thin planks into that in-and-out LE than trying to shape a sheet of wood to it. More on planking later.

FUSELAGE: I used a thick cyanoacrylate glue (Slo-Zap, Slow Jet) on the former halves. Work slowly and make sure that you have the correct ones: this can be confusing. Another view on the plans would have been helpful. Cross-piece location is unimportant as long as they touch the sides and don't interfere with other parts later..." 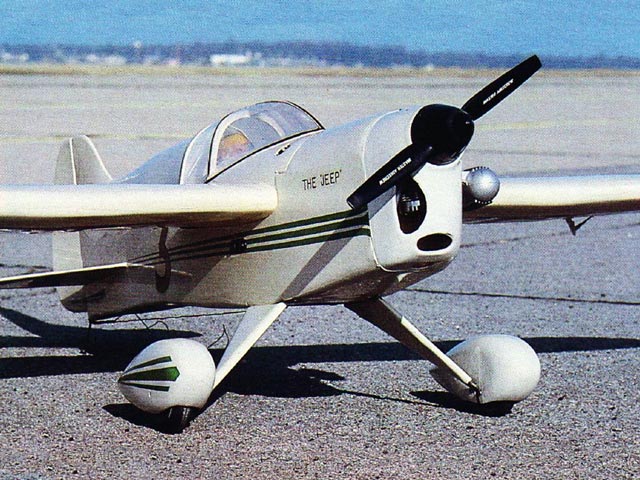