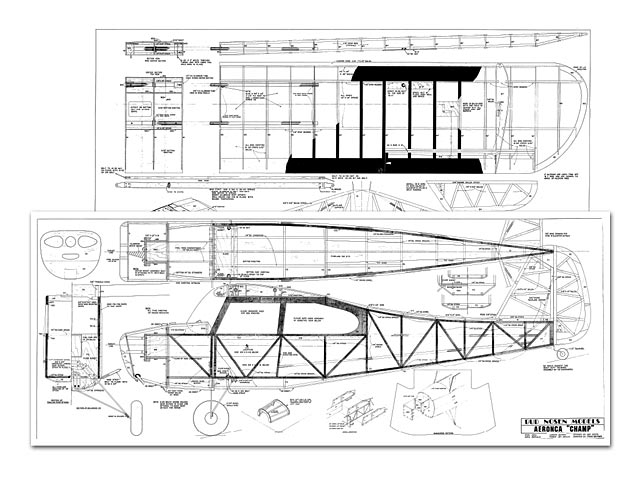 Quote: "In all cases a .60 engine in this model has proven to be more than enough power and not the least bit marginal. Due to the large size of this model, aileron control has been quite slow, and until you feel the model out, fly on rudder and forget about the ailerons.

The model outline as drawn is exact scale. Three views are available from Bud Nosen Models or Historical Aviation Album."

Quote: "The Aeronca Champ is a general sport and Stand-Off Scale aircraft produced by Bud Nosen Models, Box 105C, Two Harbors, Minnesota 55616 and priced at $99.95. The wingspan is 105 in with a wing chord of 15 in for a total wing area of 1500 square inches. Designed for three to four channel operation, the all-up weight of the aircraft was 10 pounds with a wing loading of 16 ounces per square foot. Our RCM prototype, which was completely covered with Solarfilm, utilized an OS Max .80 and 13 ounce tank, while guidance was provided by a Kraft radio.

While we could not give the kit, itself, a better than average recommendation, due to its poor and often times weak construction, the flying characteristics of the aircraft are truly excellent. The Aeronca Champion flies like the real aircraft needing both rudder and ailerons to turn. This aircraft is extremely realistic in the air and pure joy to fly low and slow. Our particular kit was missing the 3 x 1/8 in sheeting and also did not contain four of the nylon horns supposedly included with the kit. The wing planking was so hard that we were unable to bend it even after wetting the sheeting. The firewall was warped beyond use and a new one had to be cut. We would also recommend the use of 1/4 in square spruce in the fuselage instead of balsa which would beef-up the weak fuselage construction. In addition, the method of attaching the vertical fin to the fuselage was quite weak and should be strengthened accordingly." 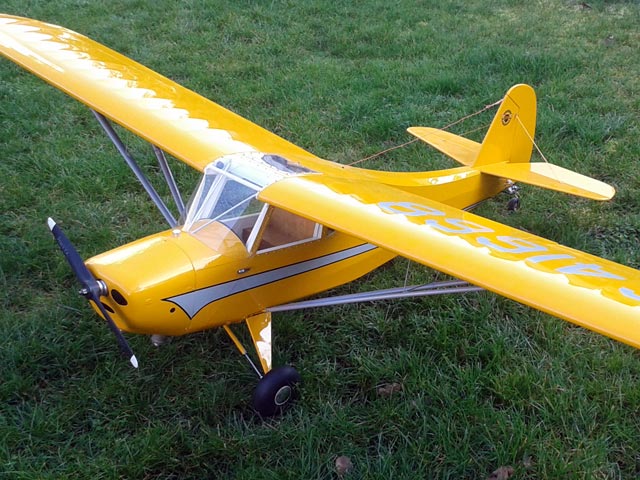 Photos of completed Aeronca Champ model were found online at http://www.rcuniverse.com/market/item.cfm?itemid=742155
SteveWMD - 02/08/2016
Hello, here I am sending you the basic construction pictures of my Aeronca Champ oz7927 [pics 004-008], I was actually looking for the Precedent Plan for the Aeronca, but nobody seems to have it anymore, and so I found what I was looking for at OZ, the Bud Nosen Aeronca - almost identical to that of Precedent. Equipped with good old Futaba servos and multiplex receivers. A Saito Fa 120 4T is installed as the drive. With 360ml tank. The wings are attached to the fuselage and fixed with a nylon screw, the struts take it. I saved the construction of the middle section and a little weight. The suspension is fully functional with the struts just like the rear wheel. I would not have liked to make the whole thing out of wire, the whole thing is hard soldered, the bonnet is made of GRP, which I made in a Gibsform. The weight will be about 7 kg after the finish. The whole thing is planned to be covered with Oracover.
Andreas Nagel - 20/04/2020
Hello Outerzone team, Here are the pictures of my finished Aeronca OZ 7927 according to the Bud Nosen Plan [main pic, 009-011]. Finished with Oracover Scale golden yellow. Identification and decorative stripes Orastick light gray.
Andreas Nagel - 22/01/2021
As for the sluggish ailerons, the full size Champ has differential of around 10 degrees but still has a bunch of adverse yaw, if you just move the stick to start a turn the nose will yaw about 10 degrees opposite the direction you want to go. Step on the rudder to initiate the turn and it will go right now like a 3 channel model and you have to hold opposite aileron to keep it from steepening the bank angle.
Douglas Babb - 23/01/2021
Add a comment