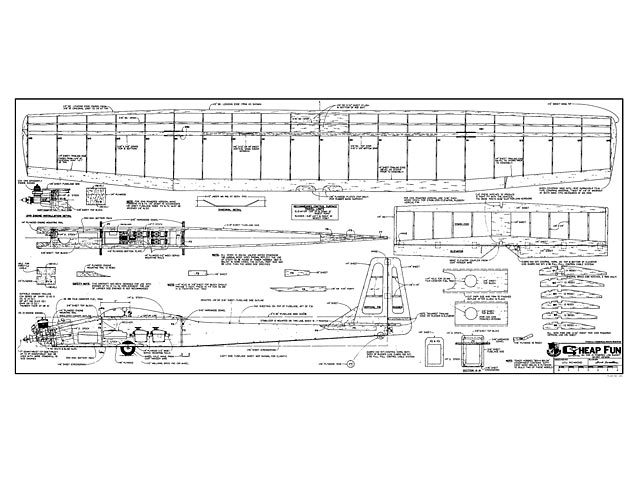 Quote: "For modelers of all skill and experience levels, here's Stu's answer for R/C on a budget, with maximum enjoyment! Low cost sport trainer for .049 - .10 Engines. Cheap Fun, by Stu Richmond.

One of the great (but little-known) values for our hobby dollars is the Tower Hobbies 'Box-A-Balsa' that usually costs a bit under $30.00, Back during the Cold War days, I used to buy these and ship them into Eastern Europe to modeling pen pals, and they were always most welcomed. The Box-A-Balsa assortment #1 comes with 2-1/2 lbs of assorted sheets and strips of balsa as well as three different thicknesses of plywood and even has servo rail wood. The assortment is always the same and it's not scrap stuff left over from kit manufacturing or such; I regard the wood as being first-class quality.

A couple of years ago, I again studied the contents of the Box-A-Balsa and every time l added two-plus-two, I kept getting a 'five' for an answer - better than getting '4'. By this time, I was sure I could build not one model, but two R/C models from a single box. It was an interesting challenge. l had bought a new-in-box 0.S. .10 R/C engine at a swap meet for $25.00 and it had no home. Like many of us, I had an assortment of Cox .049 engines that were also homeless. I'd also been saving chopsticks from our favorite Chinese restaurant for some time, and there were always 35 mm film containers from my photo projects. l'd always picked up old tire weights when I saw them, and a kid's toy car yielded a couple of 1-3/4 in rubber wheels I'd saved in my landing gear box of junk.

When Tower hobbies came out with their $99.99 System 3000 4-channel FM servo-less radio system, the total concept of 'Cheap Fun' started to clearly come together. I like models that are above-average fliers. I don't seem to care too much for prettiness; my artistic talents are near nil, except for what I can make colorful on my models. My building isn't super, but it's plenty strong. More than anything else, I'm not satisfied with an R/C model unless it performs well in the air.

Design Philosophy. The Cheap Fun challenge was now clear. Build two R/C models from a single Box-A-Balsa, use the 0.S. .10 on one and a Cox .049 on the other, use 35mm film containers for fuel tanks (they hold just over an ounce), the use of chopsticks would work for dowels to hold on the wing, use chopped up lead from the tire weights for nose ballast, and toy wheels could be a belly-mounted landing wheel just like real sailplanes use. The models should be identical in size, but the lighter and thinner wood would build the .049 powered model, and the heavier/thicker wood would build the .10 powered model. One would get the $99.99 Tower radio, and an extra receiver added to my Skysport would fly the other.

The models should be sized for a standard airborne battery and standard servos. The emphasis would be on doing the project on a cheap budget to get the most flying fun. The models would therefore be named Cheap Fun. I even figured I could save money on wire by using a standard coat hanger for the wheel's axle, as well as for joining the two elevators together... " 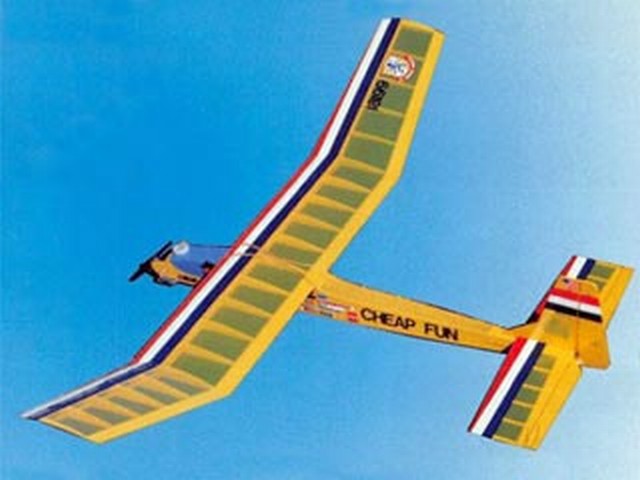