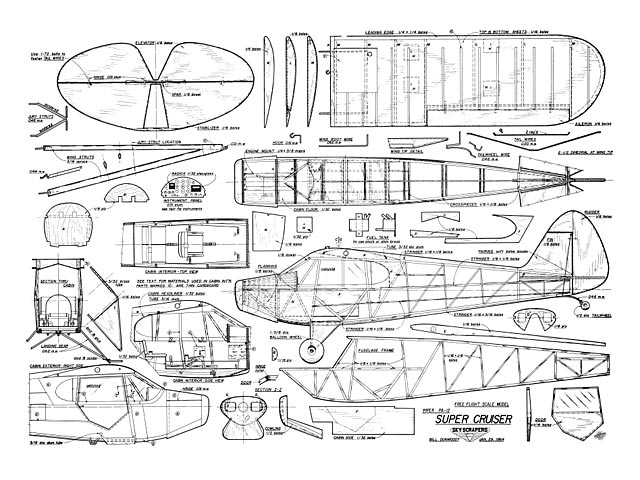 Quote: "The Piper PA-12 Super Cruiser has become a familiar sight at air-ports all over the world since its introduction in 1947. It marked Piper's first commercial venture into the more-than-two-place field. The three-place Super Cruiser clearly resembled its predecessors the Cubs in appearance and greatly improved on the Cub's performance.

The presence of Super Cruisers at many local airports makes it a desirable subject for a scale model because complete detailed information is readily available. The model shown here was patterned after a Super Cruiser seen at Deer Park, Long Island, NY and it differs from others in at least two details: a custom-made instrument panel, and the absence of an oil cooler intake under the cowl.

This model is small, scaled inch to the inch, to produce a durable model suited to the rigors of everyday flying. Past experience with larger flying scale models has led me to forego their superior flight performance to gain more structural strength. The solid tail surfaces, sheet covered wing, rigid landing gear and plug-in wing mount all combine strength with scale appearance.

Original model had a 1 cc diesel engine, while the plans show an .049 glow engine. I prefer diesels for scale models because no fuel proofing is required and these engines run steadily at all speeds and while cowled in with restricted cooling. Motor mount spacing must be adjusted to suit the engine you choose.

Construction of the model is straightforward and only a few out-of-the-ordinary items will be explained here.." 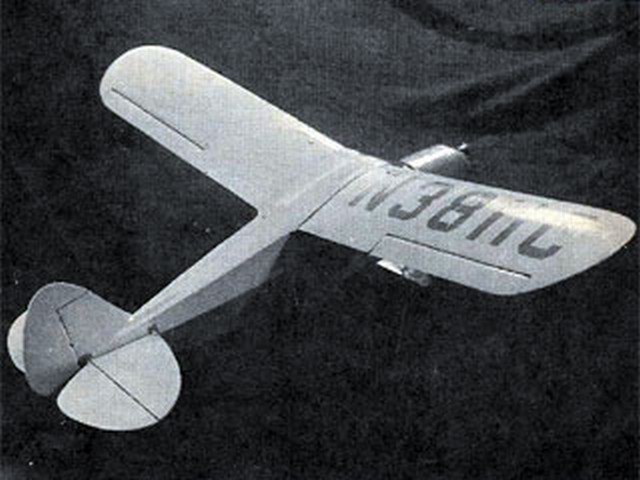