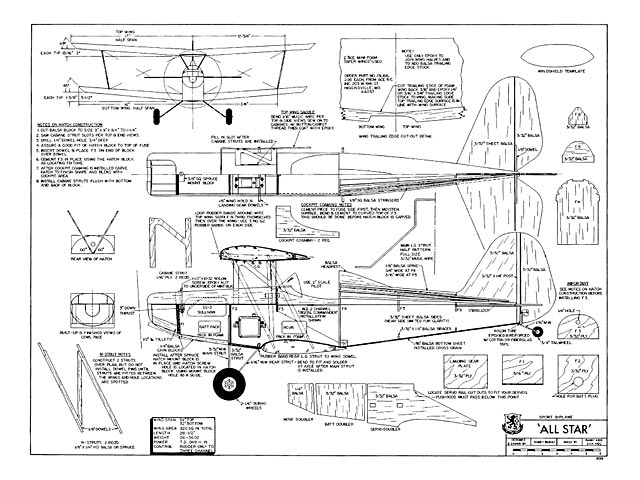 Quote: "This eye-catching 34in span model is a minature composite of the EAA homebuilt biplanes. Using two Ace foam wings, it is desgned for two or three channels and a .10 engine. Easy to build and easier to fly, proptotypes have been flown with engines from .049 to .15

The Biplane nut knows who he is! Anything that flies turns him on. If it has two wings he goes into an inverted spin. Even a Dragonfly will attract a second glance. I'm one.

Way back in the Summer of '42 and the adjacent years, I spent many hours out at the local 'Air Patch' watching an old barnstormer named Felix Gauthier, clad in a leather jacket, helmet with goggles, and riding jodphurs, trace lazy aerobatics all over the sky in an orange and black open cockpit Waco biplane. I was only seven then, but the memory of the sights, sounds, and smell are all still vivid in my mind as I re-live them frequently, particularly when I come across a Biplane photo. World I's, vintage mail planes, early WW II military trainers, and the currently popular small home-built two wingers all cause that same subtle nudge of adrenalin.

For a number of years now I've collected the various air periodicals, and always looked forward, especially, to the Air Progress Homebuilt Annual, containing the latest creations of these imaginative, energetic modelers whose eyes and appetites grew beyond the limits of the 36 in balsa sheet. Then, last Summer I had the priceless, unforgettable pleasure of attending the Experimental Aircraft Association Fly-In at Oshkosh, Wisconsin - truly one of the most outstanding aviation spectacles in the world. There, on one field, at one time, a collection of the finest homebuilt and restored vintage aircraft were to be seen, touched, heard and watched as they stood, parked in endless rows, along the runway as hundreds more flew an endless chain of Touch and Go's from dawn 'til dusk. There, is where one could see Biplanes! Literally hundreds of them graced the field. Some were over fifty years old and still flying, while others were chromed and polished and brand spankin' new.

The typical homebuilt is sort of like a scale model of a model, like 72 in = 1 ft scale. They build them nearly the same and they look and fly just like their slightly smaller counter-parts. I say 'slightly' because that's just about the size of them. These Pitts Specials, Smith Miniplane's, Baby Great Lakes, and many others are hardly larger than an R/C model. One can stand along the wing and rest his hand on the cowl while touching the wing tip, but they fly. Boy, do they fly! Precision aerobatics you wouldn't believe! If your euphoria is biplanes, then this EAA event is your 'fix.'

I've been building R/C models for the last seven years and have wanted to build a biplane ever since I first became interested in the hobby, however it seemed that the only scale-like realistic looking biplane kit available was the Andrews Aeromaster (oz1971) whose size and price were a little out of my reach. Many times I'd think up a design but always seemed to run up against some sort of phobia that said, for all the effort required to build up two wings, getting the alignment just right, with proper incidences, balance point, etc, I'd probably demolish the aircraft before I could trim it out, anyway. So, whenever my T'winger urge came up, I would draw a few sketches and doodle around with the design ideas and gimmicks until the feeling wore off, or I became buried under a confused muddle of unknown design factors.

Last Summer I finally broke through this barrier by using the 'cheap and dirty' attitude - throw something together quick and easy with whatever is handy and if it turns out to be a 'bummer', no great loss! So, naturally, the quickest way to a finished biplane is to start with foam wings. A couple of Ace Mini-Foam wings were gathering dust within an arms reach of me so I started with them. Using Chuck Cunningham's de-sign parameters (RCM 3/69), I developed the correct fuselage and tail dimensions.

Probably one of my main psychological hang-ups about biplanes was always the cabane strut mess. I never was much good at wire bending and soldering. For a landing gear one can get by with a mediocre job, I suppose, but building a platform for a wing to be in proper alignment with another wing, seemed to be just a little more than I thought I could handle. Then, the idea of the plywood cabane struts struck me (nothing new, Ken Willard used it in his Classmate (oz604) design, years ago). I decided to construct that area first so that if the idea didn't work I could abandon the whole project without expending too much effort. How's that for a positive attitude? Well, as it turned out, the cabane strut assembly came together with no effort at all. From that point on, construction of the remainder of the plane was no different than any single low winged aircraft. Since I got this far, I decided to go beyond the 'cheap and dirty' boxy design I originally envisioned and, instead, lean more towards a scale-like image.

Thus, the All Star homebuilt type sport biplane was created. Of course I still had no idea what I'd be up against in trying to get the airplane trimmed in its initial flights before it would plant itself in the sod or, for that matter, whether it would fly at all. Here again, my fears were eventually proved to be unfounded. Construction continued easily and the model was completed in a surprisingly short time.

The prototype was equipped with a Max .10 engine and three channels of an MRC - 710 radio for rudder, elevator, and throttle control. With all the flying surfaces looking reasonably square with each other and the center of gravity located as per Chuck Cunningham's suggestion, the plane was fueled up, started, and cautiously taxied around the grass field. It handled surprisingly well on the ground, so, with tongue in cheek, I turned the plane into the wind and faced the moment of truth. With a gradual increase of throttle, the model began picking up speed and, in about 20 feet, the tail lifted off the ground with no help from the transmitter. This brief moment is one of the main reasons nearly every model I build is a tail dragger. It's a scale-like maneuver you just can't get out of a hot pattern ship.

The takeoff roll was smooth and straight. Remembering too well how I destroyed another aircraft on its maiden takeoff by too eagerly feeding in up stick pressure before the model gained sufficient flying speed, I de-cided to hold off as long as possible before applying only a slight touch of up-elevator. The plane continued across the field with its tail in the air for another 100 feet, then broke ground, lifting slowly into the blue. A cautious application of left rudder put the plane into a large gentle left turn. This told me that the aircraft was not overly sensitive to the rudder control, and a light pressure on the elevator control showed me the plane was not overly sensitive to the elevator control, either.

With this load off my mind, I was able to make a few necessary in-flight trim adjustments and suddenly 'discovered' myself flying my own biplane instead of just thinking about it. What a pleasure! The balance of the flight was pure fun. I found that the plane was docile and smooth in flight with no apparent bad faults..."

Note this is the All Star as published by RCM. There is an alternate version of the All Star plan (oz1355) as kitted later by ACE RC. 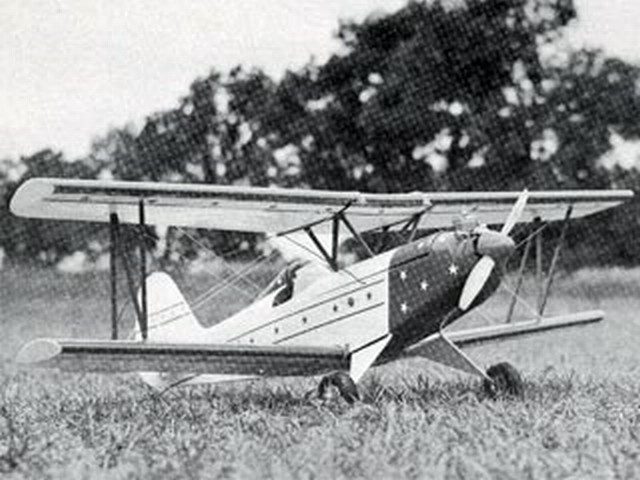