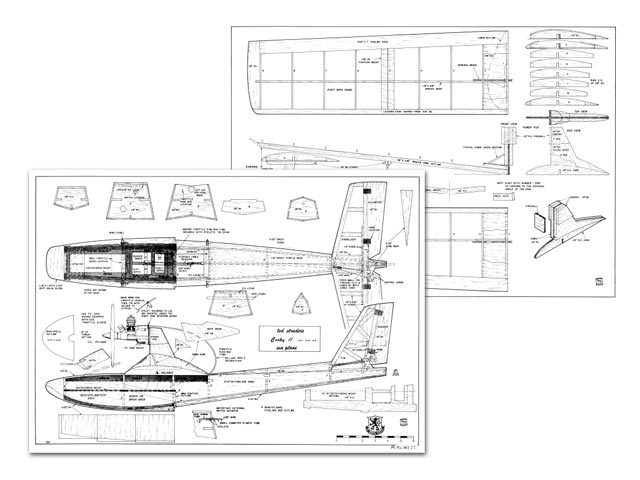 Quote: "A 1/2A sport seaplane designed for two or three channels. A Cox .049 with Ace throttle sleeve provides plenty of power and idle for taxiing. Corky II by Ted Strader.

Corky II is an enlarged version of a single channel .020 powered seaplane I designed in 1972 which was never intended to be flown from the water! Being an avid seaplane fancier, I decided to use this configuration and simply let it land on the grass - after all, sailplanes do it all the time.

After a couple of seasons of hand launching from our hay field, the urge became great enough to head for the lake. The hull had been designed for water, even though the original intent was to keep dry.

Corky I floated, taxied and, as witnessed on at least a hundred hand-launched flights, flew like a greased bullet with incredible stability, its 17 ounce flying weight didn't prevent it from catching four or five thermals and almost becoming lost. It did have one minor flaw - it didn't want to ROW! The step was positioned too far aft of the CG for the ship to rotate without an elevator.

On the first day of this past September. I decided to revamp the design for multi in time for the Brimfield, Massachusetts water meet September 12th.

In eleven days, Corky II became a reality; larger, using three channels with one of them operating an Ace sleeve throttle on a Cox Medallion .049. When my son Eric and I arrived at Brimfield, the only thing we'd had time to check was the throttle control. Corky II had not been test flown, glided or even floated. However, five flights were made that day - all hand launched as the wind was gusty and the water quite choppy.

The next weekend we went to a local hydro meet at Round Lake, N.Y., but, due to equipment problems, failed to re-ally set the world on its ear! By the end of the day, the ROW scoreboard read: Water 7, Corky II 0: and warm weather fast disappearing.

In the hope that a few good days yet remained, I installed some newer equipment which checked out well and waited for the weekend. Saturday was almost perfect so we headed back to the lake. The water had a slight ripple, it was warm, there wasn't a boat in sight, and my chief pilot made five near-perfect ROW's. The following Wednesday we went back again and, by the time we had taken advantage of that day and the following Saturday and Sunday, Corky II had completed 25 ROW flights, many of which were captured on film in the shots presented here. What we refuse to admit is the two times we completely missed the mile-long Lake and landed on the beach; the time it ran aground on a sand bar: and the couple of times it was taxied into our row boat. These are just ugly rumors with no basis in fact.

The hull of the Corky progresses from a V to an inverted V, or cathedral configuration, which, in the case of this model, is very easily formed and enhances water handling. On the step, a tunnel allows air to help break the vacuum.

We have not felt the need for a water rudder as the model is quite maneouverable on low power..." 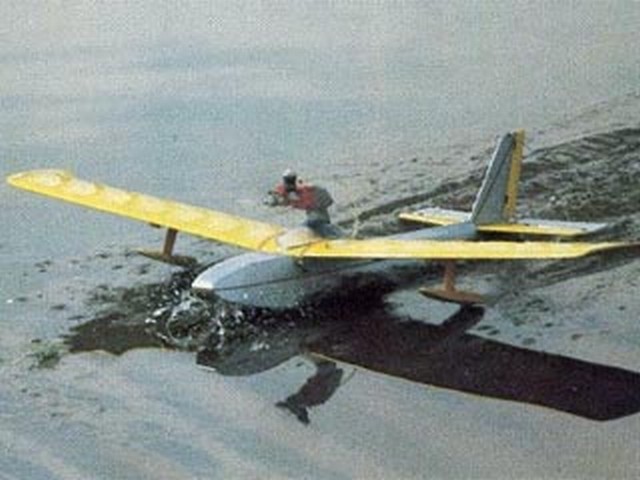