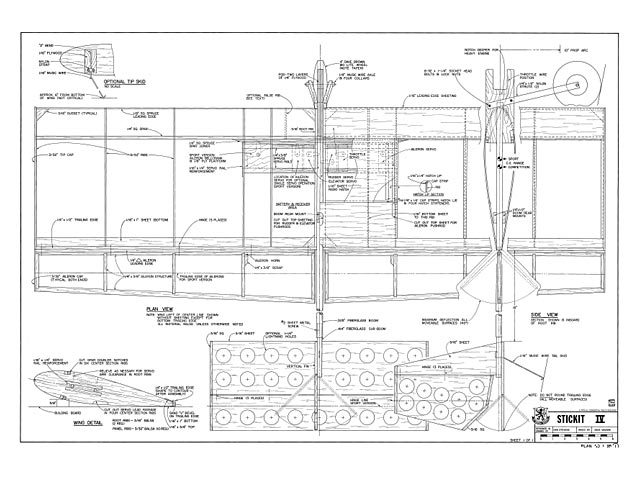 Green is not one of my favorite colors. I found this out the hard way. I covered the wings of an early model Stickit II with transparent yellow on one wing and transparent blue on the other. It rolled so fast that the airplane turned green. I was so enthralled that I allowed it to fly into the ground and destroy itself. Okay won't lie anymore - but it's almost true.

Competition Fun-Fly is big here in the Southeast. For the past three years the fun-fly season has been highlighted by the Competition Fun-Fly Nationals. This premier annual event was dreamed up and continues to he sparkplugged by Gordon Banks and his R/C Report magazine. For those of you not familiar with competition fun-fly let rue just say that the events we fly have no luck factor involved and no subjective judgements. It's all time and task. You move, the clock starts. Then you do whatever the particular event requires, and then land. The clock stops at first touch. The type of plane required to do these types of events have evolved over the years to the point that they are beginning to look alike - just like pattern, Quickie 500, Formula 1, etc. The old truism that form follows function still holds. Another truism cones to mind - beauty is in the eye of the beholder. These types of aircraft are ugly, but they sure do the job.

The Stickit IV, as the name implies, is an evolutionary airplane that was conceived and continuously modified to remain a competitive force in the fun-fly wars. It features a number of things that are not usually found on model airplanes and it requires a programmable radio such as the Futaba 7UAF or similar to activate these features. These features include. individual aileron servos. This kind of power is required for the large ailerons that give a roll rate that must be seen to be believed. The various mixes also allow us to use coupled flaps and elevator; 4 ft diameter loops for this airplane is normal. Last but not least of the flying functions are spoilers. These are coupled to low throttle and will get you back to terra firma posthaste.

Another unusual feature is the single, large wheel landing gear. We are always in a hurry to get back to earth so conventional landing gear and attachment methods will not stand up. The landing gear as shown will allow 'arrival' angles as great as 30 degrees at half speed and will not only survive but put you back in the air with the engine still running! As an aside, tip skids are shown on the plans as an option. Only use them on hard surfaces. They are not necessary on grass. Everything else on the Stickit IV is almost the minimum the law allows to keep it going in the right direction. A case in point is the fiberglass tail boom. It weighs 1 oz per foot and I've only seen one broken in two years of my friends and my experience. This was in a full power crash due to radio failure.

With the sport version modifications shown on the plans, the Stickit IV becomes a docile, well-mannered Sunday flier that will keep on flying, at a much lower airspeed to most and survive many a less than perfect landing.

Build it as light as you can. Use no balsa heavier than medium. Make good joints and use a quality CA such as Satellite City's Hot Stuff. UFO is great if you are CA sensitive. Avoid epoxy and, lastly, build it straight. You will be positively amazed at the kind of flying you are capable of with this airplane.

Construction. This will not be an absolute step-by-step guide. You should not be building this airplane it you are a beginner..."

Quote: "Thanks for buying the Stickit IV, a radical new design featured in R/C Modeler Magazine as 'The Ultimate Competition Fun Fly Machine!'

The Stickit IV can be built as either a full blown competition machine, or with slight modifications, a sport version. To be truly competitive, the competition version should use a programmable radio with one servo on each aileron. This set up, with the large ailerons, produces a roll rate that must be seen to be believed. The various mixing circuits allow coupled flaps and elevator; 4 foot diameter loops are normal for this airplane. Spoilers coupled to low throttle allow rapid deceleration for quick touch and go's etc. The single large wheel coupled with its nylon struts allows a degree of flexibility that will withstand abuse that would destroy a conventional landing gear.

With the sport version modifications only a standard 4 channel radio is required. In the sport mode, the Stickit IV becomes a docile well mannered Sunday flier that will keep on flying at a much lower airspeed than most and will survive many a less than perfect landing.

Article, thanks to hlsat.
Instructions.
Review. 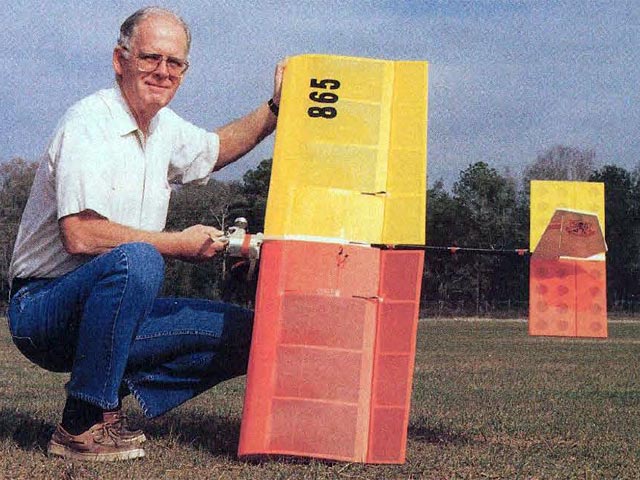 When Luftwaffe commander Hermann Goering saw long range P-51s appear over Berlin, he knew the war was lost. That's how I felt the first time I saw one of these things at a fun fly event. Fun flys were popular local events in the eighties, Run-What-You-Brung no pressure events. Then the competition boys took hold and ruined it for everybody like they always do. These models were not easy to fly, no good for sport flying, built for one thing only. You had to carry them out to the runway because they taxied like a drunk pushing a baby buggy. I lost interest as many others did. But there is a purpose these days for one of these monstrosities, there is no better 3-D trainer available. If you wanta learn 3-D, build one of these light with a high-revving .36 and a mousse can muffler, low pitch prop and have at it.
DougSmith - 30/07/2016
Add a comment