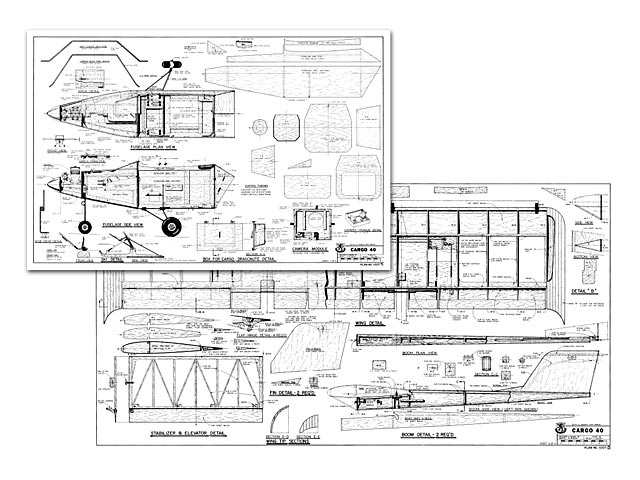 Quote: "The Cargo 40 is the result of wanting a model that could take off from a sma and rugged field and be able to carry a load. Cargo 40 By Bertil Klintbom.

The Cargo 40 is the 'brainchild' that came out of a discussion with my modeling friend Freddy Irung, who has done most of the building and also many of the small construction details. We wanted a model that could take off from small and rugged fields and still be able to carry a camera for aerial photography. The result is Cargo 40, equipped with leading-edge slots, flaps, and vortex wingtips.

For the camera we used a special camera module mounted to the fuselage with rubber bands. In the rear of the fuselage we have a servo operated cargo box for a drag chute, bombing, etc, the possibilities are many. The engine used in the prototype is a standard Enya 40 TV but there is enough room for a 60 if you want more power. The construction philosophy is to build light, yet strong. The completed model without camera module weighs only 8.36 lb (3.8 Kg), although it is covered with nylon and doped. This covering weighs more than plastic film covering.

The wing airfoil is NACA 2412 (12% thick). This airfoil in effective on the model. The aircraft is capable of STOL operation (Short Take Off and Landing). It is very stable in the air.

As you can see on the plans, we use no rudders, only a steerable nosewheel. If you want to have rudders it would be possible to mount a rudder servo in the right tail boom and connect the rudders with rods.

The model is not complicated to build but it probably has more pieces than a standard model - but you get something unusual too! As always, first make a 'kit' of parts from the plans, it will speed up building later. This construction article explains most of the details but it is not completely detailed. I believe that the builder of this model should have built at least a pair of models before.

Construction. Tail Booms: First, check to see if your elevator servo fits into the tail boom as shown on the plan. If not, make the booms larger to get the required space. Cut out the plywood parts Bl, B2, and B3. Cut out the sides from 1/8 balsa and glue on the square balsa sticks. Also glue on the reinforcement stick under the slot for the flap. Join the boom sides with former B1 and the pieces of 3/16 square stock. Add the other details such as B2 with the plastic tube for the hold-down bolt. Glue on the balsa top and bottom and make the slot for the fin. Install the plastic pushrod for the elevator in the left tail boom.

Cut out the fin from 3/16 balsa sheet and slot out for the plywood reinforcement B3 for the plastic bolt that holds the stab. The spruce pieces for stab alignment should not be glued in place now. Wait until you can mount together the completed aircraft and measure the incidence between the stab and wing (0°). Bevel all corners as shown in section A-A. Make two tail booms. The left one will get the elevator servo installation... " 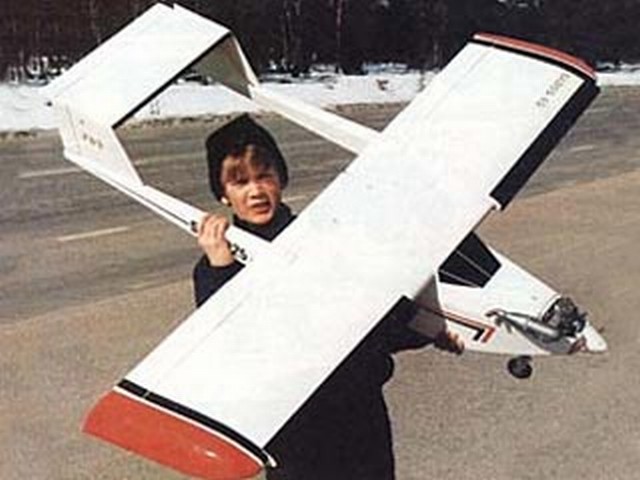