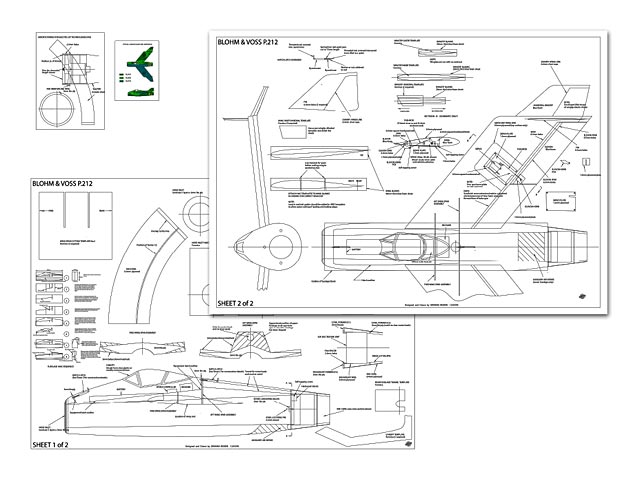 Quote: "Greetings Steve, Attached are plans a couple of build photos for Graham Reddin's BV 212, which I downloaded off his now defunct site several years back. The files are ancient AutoCAD, which I was able to open in Illustrator, but I had to guess at the line weights, you probably have AutoCAD and would be able to produce a better plan. I attempted to make a passable pdf as well, which I've included..."

The seed for this model was sown in early 1994 when I was looking for a simple airframe with which to try out the then newly released Electro Jet Technologies fan unit. My preference is for experimental or unusual aircraft types, so i turned to my references for German jet projects of late WWII, a guaranteed source of some of the most esoteric-looking aircraft to never see the light of day! My first choice was the Heinkel P.I078c, an unsuccessful candidate in the Emergency Fighter Program of 1944. In one of its proposed forms it was to have had a cranked, swept back, flying wing layout, with strong anhedral tips and no vertical surfaces! This appealed to my sense of the bizarre, so plans were quickly drawn up and in no time I had a blue foam and brown paper likeness ready to fly. That was when the fun started!

Considering the most unusual layout, I considered it prudent to put the model through a series of glide tests without the weight of the flight battery and fan, before attempting powered flight. This turned out to be a wise move, as straight away it displayed absolutely no directional manners whatsoever, and was far happier travelling sideways with its nose cocked 30 degrees or so to the direction of travel than it was pointing in the right direction!

One of the beauties of using blue foam construction for experimental models is that brutal modifications can be incorporated very easily. So out came the razor saw and epoxy bottles and a number of different changes were tried - altering the size and anhedral angle of the tips - all with little change to the

overall flight characteristics. I concluded that in addition to the effect of the anhedral tips, the model was also suffering severe destabilization from the sides of the grossly enlarged nose inlet which were acting as large keel surfaces well ahead of the Centre of Gravity. In the end, I think this effect was dominant and with a better fuselage profile forward of the C of G, the model may well have been marginally stable. Anyhow, after exhausting all efforts to make the existing configuration work, I conceded defeat and grafted a pair of blue foam vertical fins to the end of each main wing panel. The transformation was miraculous - why on earth did Herr Heinkel not consider putting these on in the first place?!

The model was now ready for its first powered flights, which it accomplished with ease. From these it was decided to graft a little bit of extra area onto the smallish elevons to give the elevator a bit more authority. This was the final modification necessary, and from that point on, the little Heinkel flew very sweetly indeed. It no longer looked like the original aircraft, however, and I suddenly realised that it now very closely resembled another German WWII project, the Blohm and Voss P.212. I concluded that by 'tweaking' the outlines of this resultant model just a little bit, a fine-flying rendition of the BV P.212 could be made.

That's how the model presented here came about. During the test flying of the second prototype it was decided to alter the control configuration from strip elevons to inset elevons and alter slightly the size of the wing tip surfaces. These changes further improved the flight characteristics and are as

drawn on the plans. The plans show the Kress EJK fan unit installed and also the installation of the Grosse EJT fan. Unless noted otherwise, text refers to both versions. It is likely that the Mk2 version of the Grose EJT fan with the integral shroud/stators could also be installed (a slightly different mounting system to that shown on these plans will be needed).

Construction: Construction begins with preparation of the fuselage foam block. Refer to the sketches numbered 1-8 throughout this procedure. Blue foam was used throughout, but I suspect that white foam would be OK too as long as you sheet the wings with a balsa veneer (or add two ? mm x 6mm hardwood spars at the point of maximum thickness).

STEP 1. Begin by preparing a piece of blue foam to the size shown on the plans. Mark the longitudinal centreline of the top, bottom and both ends of the prepared block with a felt pen.

STEP 2. Cut a pair of WING SPAR TEMPLATES from Formica, and pin to the left and right sides of the block, ensuring that the rear of each template lies exactly 200mm forward of the rear of the block. Hot wire cut (hence shown as HWC) the rear wing spar slot only (the front spar slot is cut later).

STEP 5. Trace fuselage side view to Formica to make HWC templates (2 required). Allow an extra 20mm at front and rear for wire lead-in/exit guides. Tape Equipment Hatch back in correct position, then HWC fuselage to shape.

STEP 7. Tape all blocks together, then mark both ends of fuselage as shown. HWC chamfer on fuselage sides using hardwood guides.

STEP8. Remove canopy and Equipment Hatch, the HWC down centreline of remaining blocks. Take one fuselage half and pin Nose Inlet and Duct Cutting Template (Rear) in place. HWC duct. Repeat for other fuselage half. HWC aerial and leads tunnel using Duct Cutting Template (Rear) and Tunnel template. Repeat for other fuselage half. Smooth the fuselage ducting using 400 grade glasspaper wet and when satisfied with the finish, epoxy the two fuselage halves together. The small section of fuselage forward of the Equipment Hatch is now epoxied in place. Cut the two Dowel Mounting Blocks from 3mm Liteply. Do not drill holes for the dowels at this stage. Locate the position of the blocks on the fuselage, and trim away the foam until they seat flush with the rear face. Epoxy in place..." 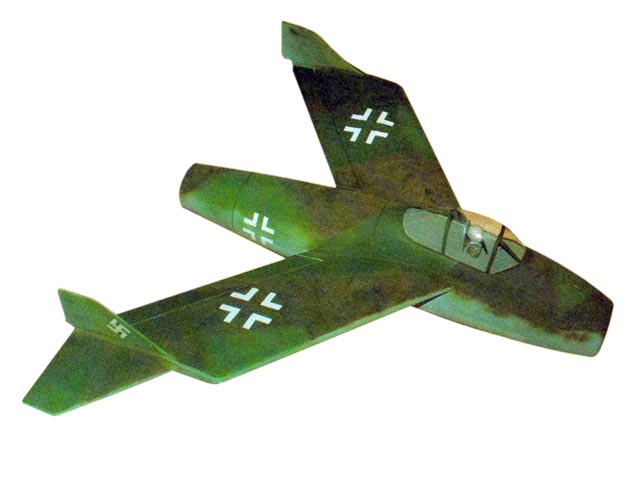