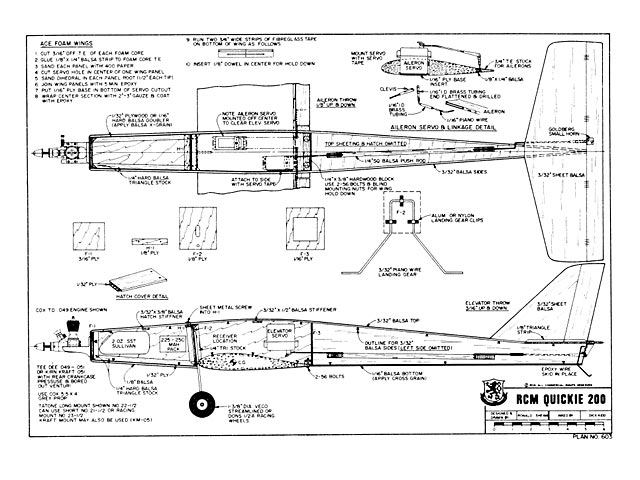 Quote: "RCM introduces a whole new concept in Half-A Racing - the Quickie 200, a racer with the proper dimensions for stability and penetration. Fast, economical with smooth take-offs and grease-on landings. by Ron Shean.

Editor's Preface: When the Quickie 200 was first submitted to us to consider for publication by its author, Ronald P Sheen of Paramount, California, a member of the BIRD'S Club, we were impressed with the simplicity of construction as well as the comments we had heard concerning this ship from local pylon fliers. For this reason, we decided to build the RCM prototype shown in the photographs accompanying this article.

This prototype was extensively tested by both Dick Kidd and myself, using a stock Cox TD .051 engine, a Kirn-Kraft pressurized .051 with bored out venturi and special needle valve, and a non-pressurized Kirn-Kraft Cox TD .049 with Cox muffler. During these test flights, we became more and more impressed with the performance capabilities of this little ship that took only two evenings to construct. All test nights were performed with an RS Systems radio using two servos and a 225 mah battery pack. Standard Cox 'red-can' fuel was used for all test nights. During the testing period, we loaned the aircraft to RCM staffer. Bill O'Brien, who took it to various fields and put it through its paces for local fliers - all of whom were as impressed a.s we were with its capabilities as a racing aircraft and with its high performance stunt potential.

Following this, we got together with RCM's racing editors, Don Dombrowski and Fred Reese, and they, in turm, put the Quickie 200 through its paces. During these flights, too numerous to even count, we shifted the CG position several times, increased and decreased aileron and elevator throws. and checked the ship for handling characteristics every time a change was made. As originally presented to us, the CG was further forward than is shown on the plans accompanying this article. This, in turn, necessitated a greater degree of elevator throw which did not enable the aircraft to groove as well as the more rearward CG position shown on the plan coupled with the resultant decrease in elevator throw. Fred Reese demonstrated this quite capably by flying the aircraft for almost an entire tank full of fuel no higher than approximately five feet off the ground.

Yet, for those who are not interested in racing, this ship is capable of axial rolls both horizontal and vertical, vertical eights, inverted flight, inside and outside loops, and just about anything else you'd care to perform. Its speed is in the 65 mph range and ranks with the best 1/2A midgets in the field. Yet, it grooves like its larger pattern and racing counterparts, with absolutely no bad characteristics.

It is extremely easy to land and take-off, and can stand a great deal more abuse than its larger and heavier cousins.

Our prototype was built entirely with Hot Stuff, covered with yellow Solarfilm and trimmed with MonoKote trim sheets and DJ's Striping Tape. The ailerons and elevators were connected with Solarfilm hinges with the edges sealed with a thin coating of K & B clear Superpoxy.

Following the test flights that went on for a period of several months, Don Dombrowski and Fred Reese drew up the set of rules for the RCM Quickie 200 races which you will find in this issue of RCM. We predict that this will be one of the most popular club racers throughout the country, and one which will add a great deal of enjoyment as a club racing activity.

It is easy and quick to build, inexpensive, and uses components that are readily available throughout the count. Its performance equals or surpasses almost any of its counterparts available today. Even if you are not interested in racing, you'll find the RCM Quickie 200 an exciting high performance stunt ship - and we'll bet that you'll soon be entering the next Quickie 200 race in your area..." 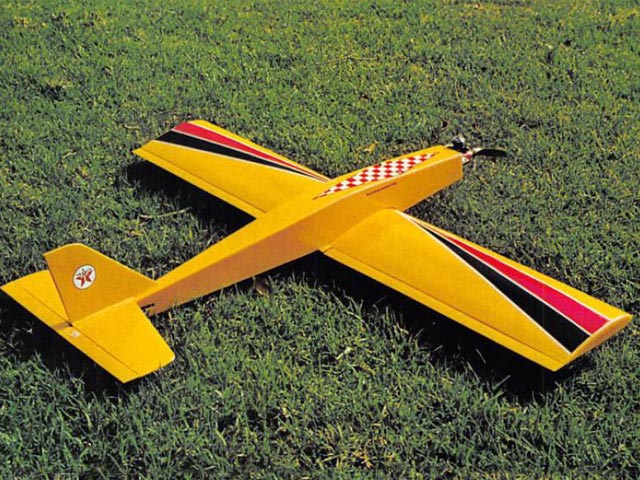