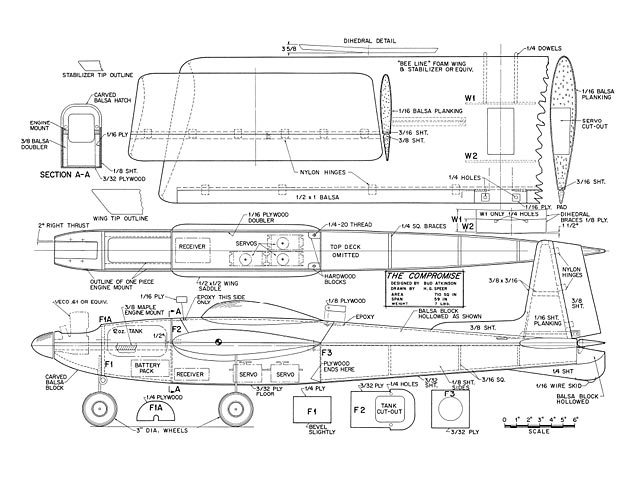 Quote: "Are mid-wings better? The Compromise. A unique concept in an ordinary looking R/C airplane polishes performance. For 45's to 61's. By Bud Atkinson.

IT seems we R/Cers must be conformists because our competition birds are in a rut. Over the past three or four years they have all looked, and performed, about the same. The competition multi airplane has become a low-wing Taurus (oz612), Candy (oz6387), Beachcomber (oz), or Kwik Fli (oz6526) or a variation of the same. All are good competition machines, of course. But there cannot be an ultimate end in design. There should, and will, be new and different methods for obtaining high-performance in an R/C airplane. With this in mind, we present the Compromise, a high-performance, easy-to-construct, pattern-competition airplane, much different from the run-of-the-mill low winger.

In my association with the old Class II for the past several years many things have been learned about lateral stability, which such an airplane must possess. This is the main, controlling factor of this class of planes. A large percentage of the ships in this class lack lateral stability, simply because many designers say you don't have to worry about it. We have ailerons to overcome the lack of stability, they argue, so it's no problem. That's why many low-wing airplanes don't spin easily on command or, when they do, recover poorly from a spin. Rolls are rather sloppy on many a low-wing ship.

The Compromise was designed to handle these problems. With the addition of more power in our airplanes, performance didn't necessarily improve very much, simply because wing loading also went up. The answer, as I see it, was to go to a cleaner aerodynamic airplane. A mid-wing, or one with the engine, wing and stabilizer on the same line, produces less drag. Many of the Goodyears prove this; both in full-size and models. Generally speaking, the mid-wing is faster.

With the help of Bob Almes (Bee Line), who produces one of the finest foam pre-covered wings and stabilizers I have seen, was able to came up with an excellent surface cut from foam, covered with Bee Line's special material.

I don't claim the Compromise to be a revolutionary design. It is different, and a new approach to a high-performance airplane. I think we will see more mid-wing airplanes in the future because they have outstanding flying characteristics.

Construction: I try to keep my pattern birds simple and comparatively light with a minimum of parts. The fuselage sides are 1/8 sheet with 1/16 ply doublers..." 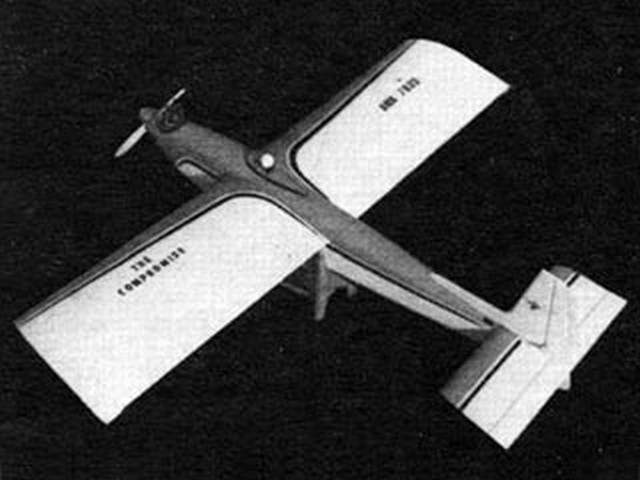