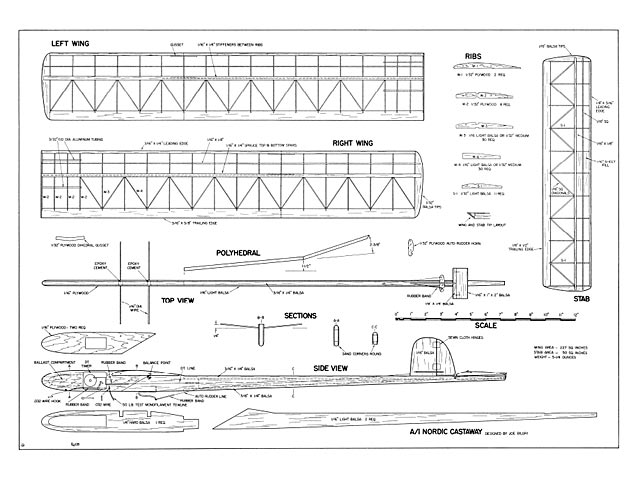 For many years I have been observing A-1 Nordics with cambered airfoils. I noted that many of the best models were the overweight ones, unless they happened to have an exceptionally thin cambered section. Quite often these were also overweight, for it is not easy to make a thin wing strong and light. With the wing area of an A-1 Nordic similar to that of a Wakefield and the required weight some three ounces less, I couldn't see just why a cambered section was necessary. And so, the 'Castaway' was built with a flat bottomed airfoil.

The design soon proved that the flying weight of five ounces was ideal, for it was easy to tow with a fast flat glide that was able to penetrate normal wind conditions, with the bounce and turn similar to that of a hand launched glider. Its light wing loading allows the flat bottomed wing to fly equally as well in the calm, even though its glide may be slightly faster than some other A-1's.

Probably the most important part of any Nordic should be a mechanical timer that starts upon release. While the number of Nordics using timers is increasing, most of the start-stop triggers are controlled with a metal pin that is sometimes hard to release, depending on the position of the Nordic. By substituting a short length of heavy monofilament (50 to 60 lb test) for the pin and its attaching line, it will stay in place better than a wire pin, yet pull out from any angle.

The use of full depth half ribs as diagonals aft of the main wing spars greatly increases its resistance to warps, for the uncovered wing is nearly equal in stiffness to most covered wings that use only parallel ribs. Wood sizes indicated on the plans are for balsa wood unless otherwise stated. Spruce is used for the two main wing spars, plywood nose pieces, and some plywood wing ribs, etc.

Construction of the Castaway is fairly simple, and the main thing to remember is to keep everything aft of the wing as light as possible. Be sure to use real light wood on the fuselage boom, stab and rudder. To build the fuselage, start by cutting the front core from hard 1/4 in sheet balsa and cement the two pieces of 3/16 x 1/4 balsa in place..." 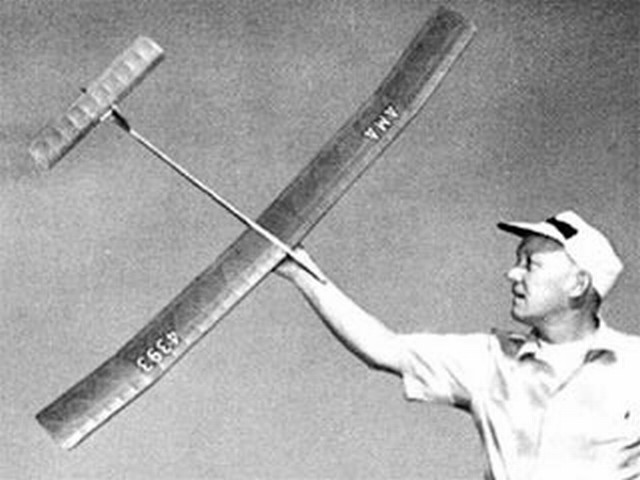