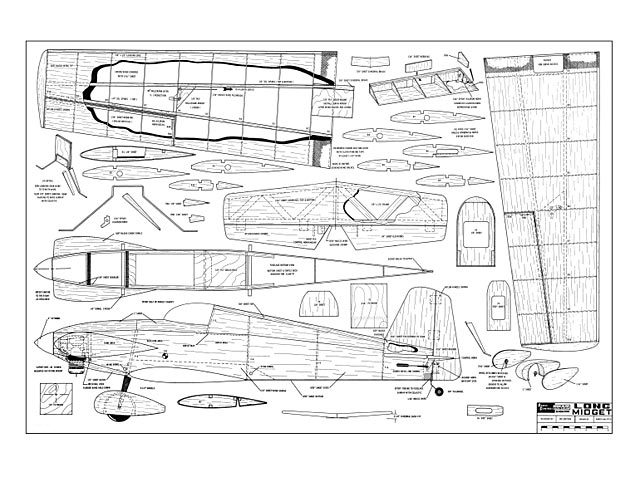 Quote: "Winner of the 1965 Nationals Goodyear Event. Dave Long's full scale 'Long Midget' was one of the hottest low-wing designs ever entered in the Goodyear races. Today, the 'Midget Mustang' version is a top favorite among homebuilt enthusiasts. By Jim Simpson.

THE 'Long Midget,' or 'Midget Mustang,' (they are the same basic design), has always appealed to me, and is of course, a natural for the NMPRA Goodyear event. But, before we continue with the text concerning the model, a short story of the real bird is in order.

The late Dave Long of Loch Haven, Pennsylvania, a professional airplane designer and chief engineer for Piper Aircraft, was the designer of the high-performance, all metal 'Long Midget.' Dave established a reputation for safe, stable, and forgiving airplane. In addition, he built five of the hottest low-wing home-builts ever entered in the Goodyear and Continental Air Races. With the decline in Goodyear racing, the Long Midget became the only one of the diminutive racers to capture the heart and eye of airplane Long Midget photographed in 1940's by Jerry Kleinburg at Opa Locks, Florida. buffs everywhere.

The Midget Mustang has been up-dated from the original Long Midget design, and is offered in Kit form by Bushby Aircraft Company, P.O. Box 209, Glenwood, Illinois. The construc-tion changes from the original racing version include standardization of materials to make use of the new alloys readily available, plus construction simplification and cockpit and canopy changes for increased pilot comfort. It is one of the simplest to build proven designs available to the home builder today.

The Midget Mustang's 9-G structural strength and low power loading give a true high performance, fully aerobatic sport plane, as well as a fast cruise speed for cross country flying. Construction is of the all metal stressed skin type. The fuselage is assembled with six formed aluminum bulkheads and a stainless steel firewall. The firewall is reinforced with aluminum angles to which are attached the engine mount brackets, and brackets for attachment of four fuselage stringers. The center section bulkhead incorporates four heavy aluminum angles to which are attached the steel wing fittings. The fuselage is constructed by first attaching the three tail cone skin sheets to the four tail cone bulkheads. This tail cone assembly is then attached to the center section by means of one wrap-around sheet. Three smaller sheets complete the fuselage to the firewall.

The wing of the full-scale Midget Mustang consists of the front spar, which is cut from aluminum sheet and bent to 'C' shape, then reinforced with twelve aluminum ships to form an 'I' beam. The rear spar is composed only of the C aluminum section with reinforcement for wing attach fittings. The wing ribs consist of nine nose sections, nine main sections, and one tip rib. The The are formed of sheet alumi-num, and as is the with the bulkheads, do not require heat treating. After the ribs are attached to the spars, the lead-ing edge skin is attached, followed by the top and bottom main section skins.

All of the control surfaces are of similar construction. They consist of one spar, hinges, control receptacle, two ribs, several skin stiffener members, and skins. Total construction cost of the full-scale ship is approximately $1,000 less engine.

The model, presented here, is patterned around the Long-Johnson 'Mammy' #N9N, as evidenced by the landing gear configuration. There are many different versions of the same basic Long design, so you pay your money and take your choice - we've got building to do!

The following, I hope, will be a 'new' and time-saving building technique for you. If you know of a better way to do it, please write me, because these methods have been borrowed from my buddies!

Start with the tail because it's easy, and when you're finished, you have the illusion of being one-third done! You may build the sandwich version with white glue or contact cement. I prefer the former. Or, you may cut the horizontal stab of balsa and add the last 1 in toward each tip of 1/2 x 1 in stock, grain crosswise to prevent warps. Cut the elevator and sand to cross-section, and connect with favorite Taurus type horn or U-shaped 3/32 piano wire. Make the vertical stab and rudder of 3/16 sheet and don't forget to notch the vertical stab into the horizontal stab. Drill the hole for the tailwheel strut and after installation, reinforce with Celastic - cover and sand to suit. I personally prefer light silkspan covering as it hides the grain and is very light..." 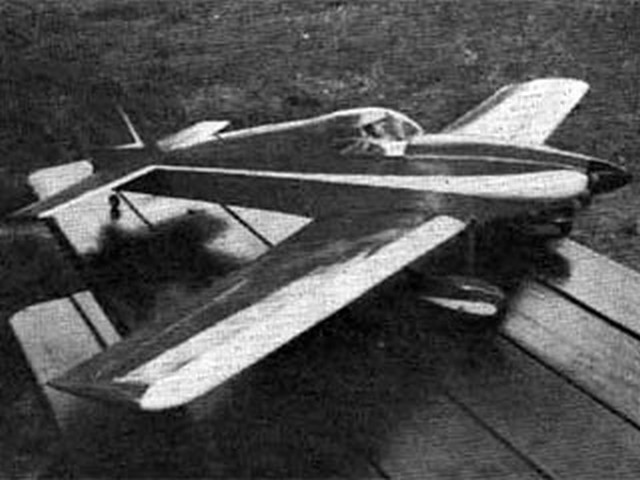