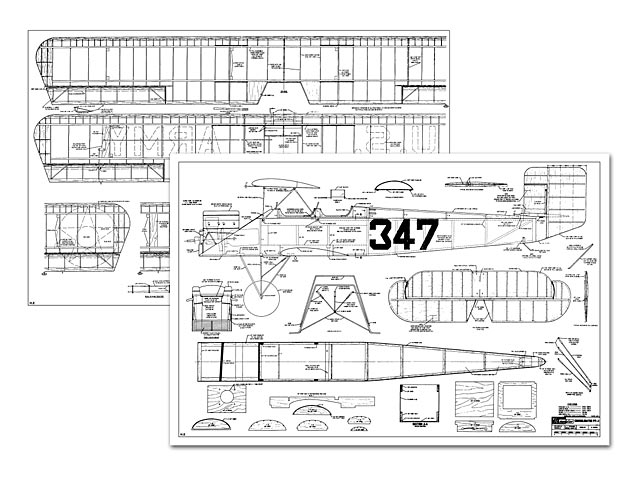 Quote: "In the San Diego phone book is a listing for DF Etchings, better known as Witty to fellow members of the San Diego Drones. When he has nothing else to do he likes to build beautiful R/C scale models - mostly old biplanes -that really fly. I mean they are flown every week like most people fly sport models! They have all kinds of detail such as instruments, pilots, deadly looking machine guns on some, and a host of other goodies. His latest is the Consolidated PT-1, first of the trainers for the Army Air Corps to have the PT trainer designation. The model is one-sixth full size, but it loops, rolls, snap rolls and does all kinds of weird things in addition to flying very well. However, Witty would rather build and fly than draw and write, so I was enlisted to brag about his new toy.

First a little history of the full size bird. When Consolidated Aircraft Co was founded in 1923, the company owned the design rights to the Dayton Wright TW-3, which was a primary trainer with side by side seating. Consolidated built approximately 20 of these for the Army Air Corps but the visibility for the pilot and instructor was poor. Modifications were made to improve the plane, including tandem seating, which allowed both occupants to see from both sides of the cockpit. The first 50 had water cooled Wright built engines, while subsequent aircraft (about 220) were fitted with Wright radial engines. This aircraft was designated the PT-1 and in 1927 was the standard primary trainer for the Air Corps. Wing span was 34 ft 7 in, length 27 ft 8 in, with a top speed of 100 mph and a cruising speed of 85 mph.

The markings shown on the drawings are of the first numbered primary trainer, a photograph of which can be found in the Air Museum Historical Aircraft Series titled 'Training Aircraft of the US Air Force 1925-1965'. Good drawings of the PT-1 seem to be as scarce as knee socks for a rattlesnake, so details were obtained from Nieto drawings of the PT-3 which was developed directly from The PT-1. The main differences are in the vertical tail surfaces, elevators, nose and engine.

All surfaces in the model are scale except the ailerons, which have been enlarged because the model is just too sluggish with the very small scale-size ailerons. The model is detailed enough to collect good scale points, but has been compromised a little in the hair splitting features to make it more at-tractive to a larger number of builders. No photo could be found of the actual PT-1 instrument panel, but a PT-3 panel and details of the rigging wires can be found in drawings of the PT-3 in Air Progress for October/November 1963, for those who want to go all out. The fuselage is big enough to hold any gear and most of the big engines will fly the bird. All of the pieces are held together by screws, but if you don't care what it looks like, the attachments can easily be modified to use rubber bands. At the time of writing the model had completed more than 75 flights in a variety of wind conditions with out anything coming adrift. Anyhow, if you dork a big biplane like this, rubber bands aren't going to help very much!

Now to the building. If you don't like wings go ahead and build the fuselage first. If you really don't like wings, turn the page, this machine has lots of them! The full length plywood sides of the fuselage make a very rugged structure and are quite light. Glue all the longerons, braces and doublers to the sides first, then insert the formers and join the sides. A couple of the bottom fill pieces of sheet installed at this time will hold the thing square. The tail end is then pulled together and the top decking installed..." 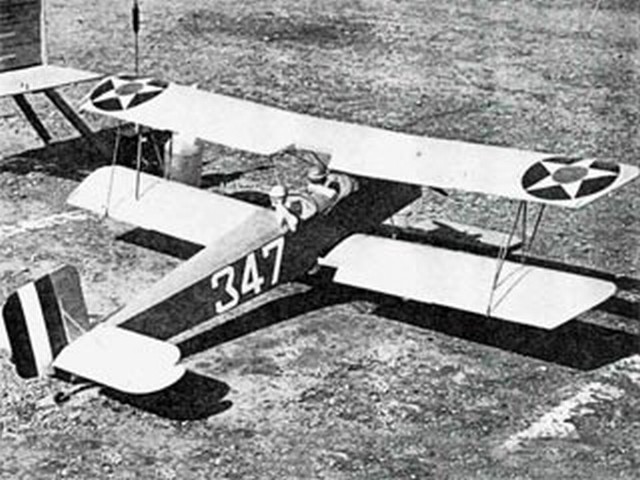