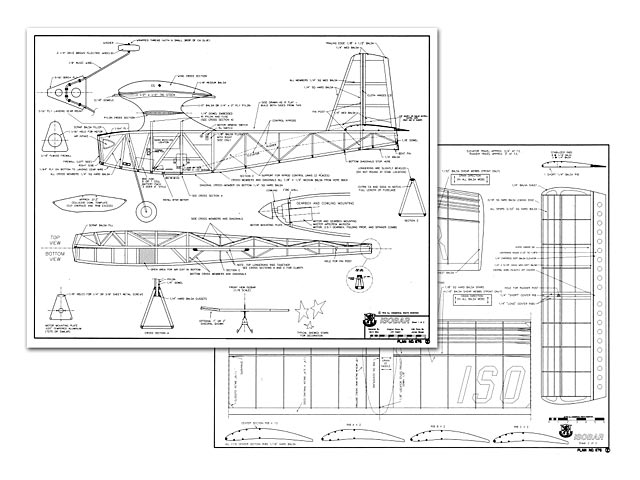 It seems that most electric kits are of powered gliders or converted gas model designs. The few that have been designed lately, especially for electric power, are either variations of scale, or boxcar ugly. Every electric kit, it seemed, was designed ignoring the inherent advantages & limitations of battery power.

Observing the flight of my friends' kit built electrics, and a couple of my own, I formulated a few ideas that might increase performance and most certainly improve the appearance.

An electric, with its short run time, could benefit from a great glide ratio, and the ability to ride a thermal. A wing with an undercambered airfoil would do both, provided the weight was reasonably low, and wing area substantial. The airframe plus radio should weigh less than the motor and battery. The wing loading should be less than 11 oz/sq ft for an extended time fun-flier.

The design should take advantage of the relatively heavy battery, placing it well below the Center of Gravity, This calls for a deep fuselage, or a pylon mounted wing. With such a placement, dihedral could be greatly reduced, and if a bit of a sweep back is added, perhaps the dihedral could be eliminated.

With these thoughts, I proceeded to sketch out some cabin and pylon designs. I liked Lonzo's idea of growing the pylon out of the sharp edge of a diamond cross sectioned fuselage, but disliked the awkward shape for installing innards.

Why not a triangular cross section? Let the pylon flow out of the apex, and the gear take the spreading angle downward? A three over four battery pack, with its somewhat triangular shape, would slip right in. Top it with a no dihedral wing, with a bit of sweep back to ensure stability in both yaw and roll. The low CG would handle pitch stability.

I refined the sketch, and ran a 3-view. The front view looked like an isosceles triangle topped with a Hershey bar - and she named herself 'Isobar'.

Isobar is built around the new Master Airscrew power unit consisting of spinner, folding prop, gearbox, and electric motor of approximately 05 rating, the unit is built for 6-cell operation, but will probably handle 7-cells for a somewhat shorter life. The motor has enclosed brushes (a can motor), but at the price it sells for it is no big financial problem to replace the entire motor when the brushes go.

The 800 mAh Sanyo pack was chosen, along with the lightweight Futaba FPT-4NBL radio with BEC speed control built-in..." 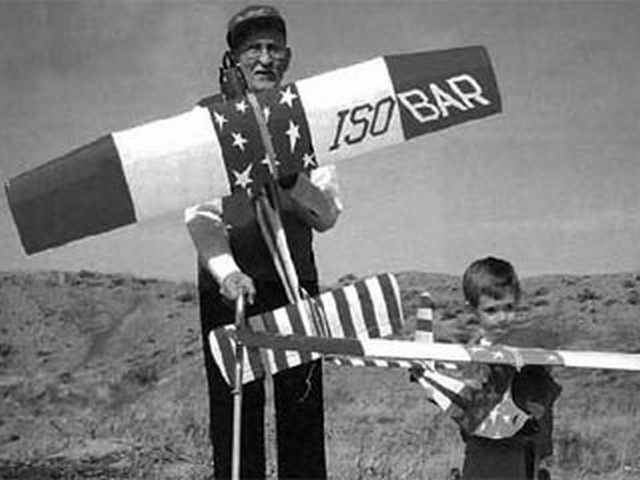