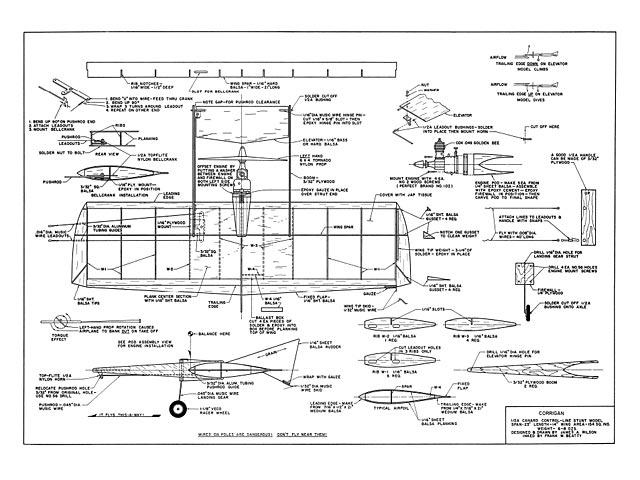 Quote: "It may go north to get south, but this cute 049 canard flies like the big stunt jobs. Corrigan, by James A Wilson.

EVERY modeler has a desire to build something unique once in awhile, and Corrigan is our attempt to be different. After quite a few years of tinkering around with U-control stunt, there was a feeling of being in a deep rut. In a search for new aircraft, we examined several plan forms, and found that the canard, or tail-first, was the only one that remained unexplored, at least by us.

Since the Wright's Flyer was a canard, we can't say that we invented it! And, as a matter of fact, a couple of canard stunters have been seen in the past. So the tail-first, or 'wrong way' concept isn't new - just different. It's worth building one just to see how wild they look in the air.

Half-A stunt can be a lot of fun. Cost, size and building time are minimum. So's the noise! Corrigan will fly as good as, or better than, any 1/2-A stunt design we've seen. It will do any of the maneuvers in the book, yet it gives that 'flying on rails' feeling normally found only in larger models.

Construction: We strongly recommend epoxy glue. It is very fuelproof, super strong and, most important, it doesn't fatigue and crack from engine vibration. Use it only where specified on the plans.

Begin by cutting out all parts. Use soft or medium balsa unless otherwise noted. Drill all holes at this time, too - such as in the engine firewall, booms, and the elevator horn. Epoxy the axle wires into the elevator and set it aside to dry. Slip all ribs into their respective slots on the wing spar, but don't glue them in yet. Add the leading and trailing edges by pinning them to the ribs.

Check alignment. Make sure the ribs are square with the spar and then sight along the leading and trailing edges and remove all twists. Glue all joints and allow to dry. Now epoxy the bellcrank mount in place and glue on the tips, stationary flap, and lead-out guides. 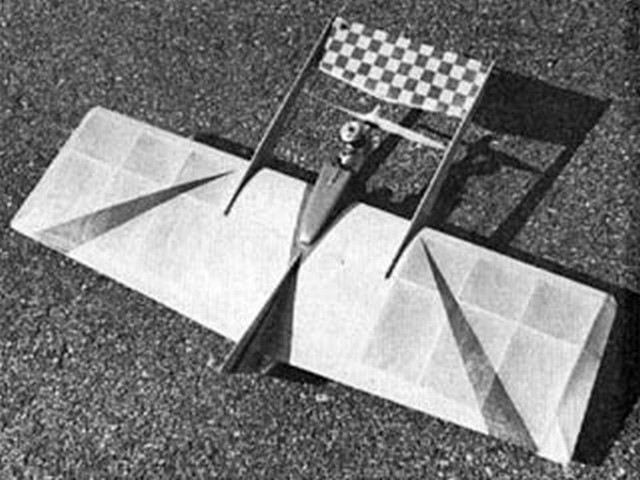